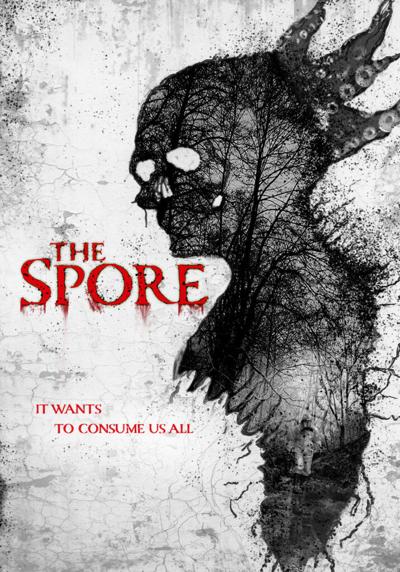 In his feature debut, writer/producer/editor/director D.M. Cunningham takes a page — or two — from the COVID-19 pandemic to fashion a grisly, gory ecological shocker that’s timelier than most films of its ilk. The Spore is a modest but encouraging calling card, and that Cunningham dedicates this film to “Wes” (Craven), “George” (Romero), and “Tobe” (Hooper) indicates his affection for the genre that each filmmaker put an indelible stamp on.

Filmed on location in Michigan, the film details a ghastly phenomenon inexplicably taking place: Mutated mold spores are spreading uncontrollably, contaminating and mutating any living thing they come into contact with, including human beings. This little corner of civilization is under a gruesome siege, and the only information the residents are receiving are intermittent radio broadcasts indicating how bad things are and how people should maintain social distancing (hmmm …).

The narrative follows 10 characters as they face this encroaching menace, and it’s not made clear until the end how these characters are inter-connected and how their fates have intertwined. The film does follow a repetitious pattern, in that each character is introduced — some aware of the threat, others completely unaware — and how they attempt to flee. In most cases, the characters are infected and perish in a horrific fashion, sometimes infecting others along the way.

The allegory is unmistakable and inescapable and could apply to any disease, be it COVID or Ebola or merely the common cold. As The Spore spells out in no uncertain terms, it won’t be the meek that inherit the Earth, but the mold. But equally, if not more lethal, is the fear and paranoia that grips mankind. In some cases, the characters fall victim to their own carelessness or their compassion, and frequently they turn on one another in moments of anger and frustration. Once again, man’s own worst enemy often proves to be his fellow man.

More could have been made of the mold’s origins, although it doesn’t really matter. Its purpose is simple — to feed, spread, and survive. There’s no reasoning with it, and there appears to be no way of destroying (or curing) it. The film, however, doesn’t necessarily end on a hopeless or nihilistic note.

The special effects are effectively nauseating, and it should be noted that, despite a smattering of in-jokes, there aren’t many laughs here. Playing is straight and keeping things tight is the proper approach.

Given its episodic structure, The Spore is fragmented but it’s fast-moving, and Cunningham clearly knows the basic mechanics of building tension. The small ensemble cast does well within the confines of their characters. Haley Heslip is the standout as Serena, a pseudo-survivalist who refuses to let her emotions get the better of her, and Jeannie Jefferies (who appeared in a couple of ‘80s George Romero films), Jackson Ezinga, and newcomers Peter Tell and Jovonnah Nicholson play their roles with earnest conviction. These are not richly textured characters, but they are believable under the circumstances.

— The Spore is available on-demand and digital, as well as on DVD ($19.98 retail) from LionsGate Home Entertainment, the latter boasting bonus features including audio commentary and behind-the-scenes featurette.