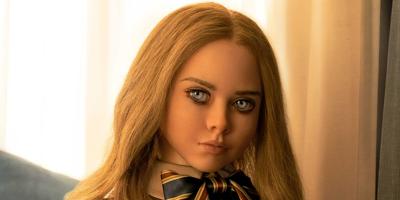 In its two-decade history, Blumhouse Productions has certainly done its part to bring horror and science fiction to the forefront. The company, founded by producer Jason Blum, has a knack for knowing its audience, be it the Paranormal Activity, Insidious, and The Purge franchises, resurrecting the Halloween series, or launching Jordan Peele (Get Out, Us, Nope) into the stratosphere.

By and large, these films don’t necessarily reinvent the genre, but at their best they upgrade it. They’re polished and professional, made by people with a genuine affection for the genre. They may wink at the trappings, but there’s never a whiff of condescension.

The latest Blumhouse blockbuster, M3GAN, follows the formula with entertaining results. Directed by Gerard Johnstone, it’s an enjoyable (if lightweight) yarn that provides thrills and spills in equal measure. The film was trimmed to achieve a more box-office-friendly PG-13 rating, but it’s a foregone conclusion that the home-video release will restore those nastier bits.

Allison Williams plays Gemma, a brilliant techno-wiz who unexpectedly finds herself caring for her young niece Cady (Violet McGraw), recently orphaned in a catastrophic car accident. Gemma is not particularly equipped to cater to Cady’s emotional needs, so she does the next best thing: She invents a lifelike android to be Cady’s friend and protector.

She/it is a Model 3 Generative Android, or M3GAN for short, and she’s a technological marvel. Gemma’s boss (Ronny Chieng) immediately sees dollar signs, but more importantly, Cady genuinely bonds with M3GAN. M3GAN helps Cady cope with her grief, is handy around the house, and takes the programming to protect Cady very seriously. M3GAN is too good to be true. Guess why?

The audience is way ahead of her, but it’s only a matter of time before Gemma realizes that M3GAN is a lethal little monster. Cranky neighbor Celia (Lori Dungey) and her aggressive dog aren’t long for the neighborhood (to say the least), and little bully Brandon (newcomer Jack Cassidy) gets his comeuppance after teasing and terrorizing Cady. Ironically, those who run afoul of M3GAN generally deserve what’s coming to them. It’s almost surprising that meddling therapist Lydia (Amy Usherwood) doesn’t meet a similar fate, although in the uncut version, she might well have, given that her character basically vanishes here.

M3GAN has any number of cinematic antecedents, the most obvious being the Child’s Play and Annabelle films. (Annabelle’s James Wan produced and co-wrote M3GAN’s story with screenwriter Akela Cooper). Others would include Westworld (1973), Saturn 3 (1980), 1991’s Eve of Destruction (anybody remember that one?), and the Terminator films. Of course, it all goes back to Mary Shelley’s immortal Frankenstein. Creating artificial life is a risky business, to be sure.

Williams, also debuting as an executive producer, and especially McGraw play their roles with conviction, and Chieng earns some laughs as the blustery boss. But it should come as no surprise that the scene-stealer is “M3GAN” herself, with Amie Donald providing the physical movements and Jenna Davis, who did the voiceover — providing just the proper — and amusingly ripe — combination of sweetness and menace, and she even carries a tune nicely!

And, yes, a sequel is in development.