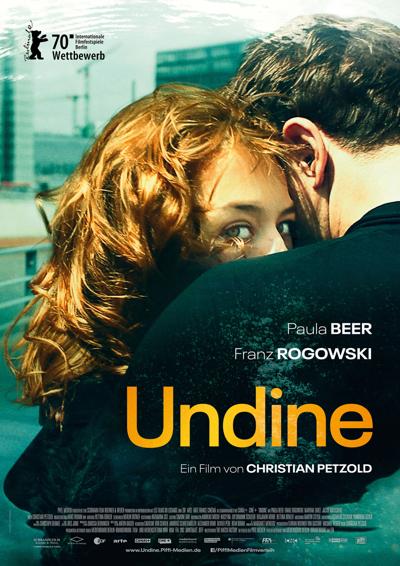 The beginning of Undine, the latest film by writer/director Christian Petzold, opens with an ending – as the relationship between the title character (Paula Beer) and her boyfriend Johannes (Jacob Matschenz) comes to an end, he having fallen for another woman.

Undine offers some cryptic words of warning to Johannes before leaving to resume her duties as a historian and lecturer specializing in the history of Berlin’s architecture. After her latest lecture, she encounters Christoph (Franz Rogowski) in a particularly memorable way at a local café, and a relationship commences rapidly.

Those familiar with the mythical story of Undine, as created by the German philosopher and alchemist Paracelsus, won’t be surprised to learn that water is a continuous motif throughout this film. Christoph is a diver and engineer, and Undine shares his affinity for diving. Their relationship seems to be progressing nicely until a random encounter with Johannes and his new girlfriend causes, no pun intended, ripples and complications that threaten not only their relationship but their very lives.

Beer and Rogowski, who previously collaborated with Petzold in Transit (2018), have an easy chemistry together, which is one of the few easy things about Undine. This is a fragile, ethereal film filled with symbolic touches and more cryptic dialogue. It’s intentionally ambiguous, yet perhaps too much for its own good.

Beer’s performance, with its pent-up rage simmering just beneath the surface, is impressive, as is Hans Fromm’s cinematography, and there are moments of magic to be savored, yet Undine lacks a cumulative impact. It’s impressive in parts but not as a whole. Too many questions remain unanswered, or even addressed, for the film to completely succeed – although it has won a number of awards, including a Silver Bear for Beer as Best Actress at the 70th Berlin International Film Festival.

Make no mistake, Undine is not a bad film, but it feels unfinished, incomplete. Perhaps it would have been a concession to “conventional” moviemaking to clarify certain plot points in order to make the film more accessible to mainstream audiences, but would such clarification have hindered Petzold’s intended purpose? We’ll never know.

(In German with English subtitles)