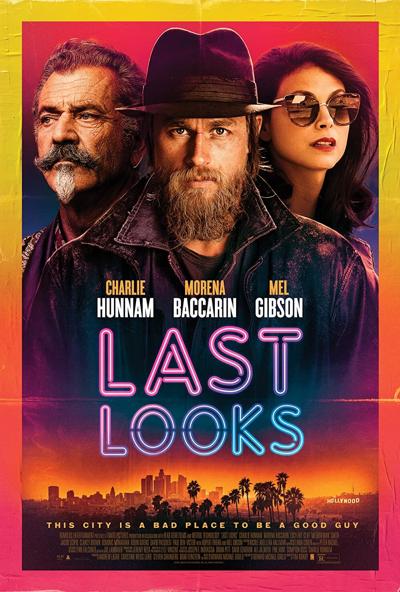 Once a shining light in the Los Angeles Police Department, Waldo left the force in disgrace and now lives a simpler, solitary life in the woods of Idyllwild, far from the bright lights — and temptations — of Tinseltown. Needless to say, something will entice him back to the City of Angels, and it comes in the seductive form of old flame Lorena (Monica Baccarin), who asks him to look into the murder of the wife of television star Alistair Pinch (Mel Gibson), an unabashed drunk who headlines the courtroom series Johnnie’s Bench and claims to have been in a drunken blackout when his spouse met her demise.

Taking a fair share of digs at contemporary Hollywood and its increasingly questionable mores, Last Looks boasts a quirky, offbeat tone that combines humor and whodunit in an engaging, entertaining fashion. Lyle Vincent’s cinematography is terrific, and although some may consider this “Tarantino Lite,” director Tim Kirkby imbues the film with free-spirited energy that’s indulgent without being self-indulgent. It’s not Quentin Tarantino but it’s in the same ballpark.

As befits a traditional noir gumshoe, Waldo favors a black fedora, has a comeback ready for any insult and is repeatedly roughed up as a result. His attempts to practice Zen techniques of relaxation tend to be for naught given the beatings he endures. Yet for all its satirical jabs, the film is never mean-spirited or nasty.

In addition to Gibson’s boozy, boorish Pinch, Last Looks is loaded with colorful, eccentric characters: Rupert Friend as a slick, fast-talking studio head; Lucy Fry as a kindergarten teacher with femme fatale attributes; Clancy Brown and Paul-Ben Victor as angry, antagonistic L.A. cops who resent Waldo’s mere presence; Cliff “Method Man” Smith as a hot-headed hip-hop star (amusingly named “Swag Dogggg”); the very funny Jacob Scipio as a gangster named “Don Q” and Deacon Randle (in his feature debut) as his muscle, an Inuit who takes umbrage when jokingly referred to as an Eskimo; and David Pasquesi as a mysterious mogul whose charity benefit Waldo crashes.

Yet in the end, Last Looks belongs entirely to Hunnam. Amid the corporate chicanery and Hollywood backstabbing surrounding the case, Waldo is the only character with a defined sense of honor and integrity, and it’s delightful to watch his dormant deductive powers begin to bloom again. Hunnam’s scruffy, eccentric turn is at the center of the film, and he holds everything together with style and wit.

The narrative is occasionally convoluted — not uncommon in this genre — but it all ends up on a satisfying note. Author/screenwriter Gould has envisioned a series of Charlie Waldo novels — the second, Below the Line, was published in 2019 — and it would be nice to see Charlie Hunnam’s Charlie Waldo back in action, ten-speed bicycle and all.

— Last Looks is available on Demand and streaming on Amazon Prime, Apple TV, Google Play, DirecTV, Vudu, Microsoft Store, and Redbox. It will be available on DVD ($29.96 retail) and Blu-ray ($29.97 retail) from RLJE Films beginning April 12.