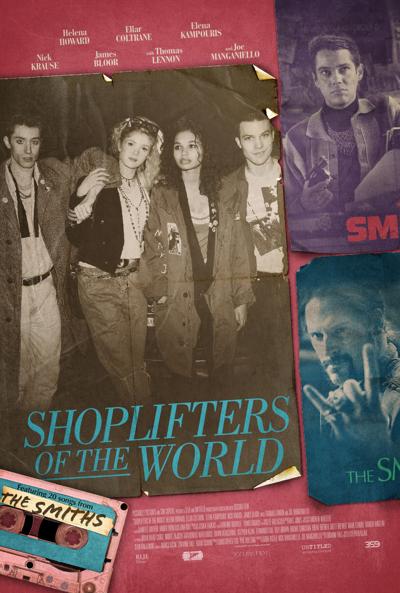 Screenwriter/director Stephen Kijak’s Shoplifters of the World, which takes place over a single night in 1987, is the latest attempt to replicate the formula. It is also the lamest and least of the lot, a smug, self-indulgent teen comedy that, despite being “based on true intentions,” depicts its era without ever seeming to understand it, opting instead to borrow elements from ’80s movies, albeit with backhanded condescension.

It’s the break-up of the British band The Smiths that sets the plot, such as it is, into motion. For the film’s principal characters – Cleo (Helena Howard), Sheila (Elena Kampouris), Billy (Nick Krause), and Dean (Ellar Coltrane) – this is on par with the end of innocence, if not the world.

Dean, who works in the local record store, has an unrequited crush on Cleo, so much so that he allows her to shoplift at will (not a particularly endearing quality), but Cleo is too obsessed with The Smiths and too self-absorbed to notice. So he takes matters into his own hands by hijacking the local radio station and demanding at gunpoint that disc jockey “Full Metal Mickey” (executive producer Joe Manganiello), whose name belies his musical preference, play nothing but The Smiths.

Initially, Cleo, Sheila, and Billy are too preoccupied to bother tuning in, and it happens to be Billy’s last night in town before joining the Army, another contrivance in a film bursting with them. There’s also the matter of Sheila’s unconsummated romance with long-time boyfriend Patrick (James Bloor), yet another pedestrian plot point.

Not surprisingly, adult characters are scarce, and those who do appear are caricatures. Only Manganiello, who manages to make a clichéd rant about his failed marriage more interesting than it should be, is able to breathe some life into his character. He literally is the only grown-up.

On the other end of the spectrum is Howard’s Cleo, whose adolescent cynicism and rebellion are fueled by depression over an alcoholic mother – whom we briefly glimpse, passed out on a couch surrounded by empty beer cans. It smacks of soap opera simple-mindedness.

Later, someone calls her a “poseur,” to which her reaction is an angry slap followed by stalking away in tears. Given Cleo’s behavior up to that point, what would she consider herself – unpretentious? It’s rather a shame to see such attractive performers as Coltrane (who also appeared in Summer Night), Howard, Kampouris, and Thomas Lennon flailing in such flimsy roles.

The characters don’t feel genuine, nor do their problems, and it’s a foregone conclusion that anyone who offers a dissenting opinion about The Smiths is, of course, portrayed as noxious, if not toxic. As the film points out with sledgehammer subtlety: They don’t get what it’s all about.

Nor, for that matter, does Shoplifters of the World, although vintage footage and The Smiths music is the best part and will doubtless entice fans. Too bad it couldn’t have been used in something better, more believable, more entertaining, and more attuned to the overall realities of its time and place. This has attitude and style but no substance. In other words, a poseur.