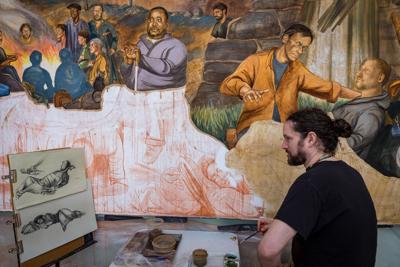 The RiverRun International Film Festival’s virtual theater is currently presenting the award-winning documentary Theirs is the Kingdom, which will be available through Nov. 29th. Tickets are $12 and can be purchased online at https://riverrunfilm.com/.

Filmmaker Chris Zaluski’s film was shot on location in Asheville, details the painstaking creation of a contemporary fresco mural inside a small church while juxtaposing poverty and portraiture. The imagery conveys people as they struggle against poverty, addiction, and mental illness. The official website for the film is https://theirsisthekingdomfilm.com/.

Theirs is the Kingdom is the latest presentation of the festival’s “RiverRun Rewind” series, which was inaugurated following this year’s festival to offer encore screenings of the festival’s most popular films for audiences who might have missed them during the festival or want to revisit them.

“RiverRun Rewind is becoming more and more popular, as it gives our supporters even more chances to view the wonderful films we offer during the festival,” said Mary Dossinger, the festival’s program manager. “Theirs is the Kingdom is a beautiful documentary that we know our audiences will enjoy, and we love the local bend that it has thanks to being from the talented Chris Zaluski. RiverRun has a long history with Wake Forest University, and we are proud to again get to this work from Chris.”

“We are delighted to include Theirs is the Kingdom in this series,” concurred Rob Davis, executive director of the RiverRun International Film Festival. “The film had its world premiere at RiverRun in 2021 and is a North Carolina story from Chris Zaluski, a very talented Winston-Salem filmmaker, so we are pleased to be able to share again for those who may have missed it during the festival. There is a wealth of local and regional talent making both narrative and documentary films in our area and region, and RiverRun is proud to showcase their work. The beauty of our virtual theater is that now ticket buyers across the country have a chance to see these RiverRun presentations.”

Zaluski, an assistant professor in the Documentary Film Program at Wake Forest University, is hardly a newcomer to the RiverRun fold.

“This is the fifth film I’ve had in the RiverRun Film Festival,” he said, “but this is the first ‘bonus’ event — RiverRun Rewind, this is — I’ve done with them. RiverRun is top-notch. In terms of regional festivals, it’s hard to find a better operation. From the competitive curation to the communication with filmmakers to the community of film enthusiasts RiverRun has cultivated over the years, it’s always an honor to be involved in anything RiverRun is doing, and I’m thrilled to be a part of RiverRun Rewind for the first time.”

Zaluski’s inspiration for tackling the project came as a result of one of his earlier documentary films. “I was introduced to the story of the Haywood Street fresco by the subject of a former documentary,” he explained. “At first, I had thought it would make an interesting short film, but the more I spoke with people affiliated with the project — from artist Christopher Holt to Rev. Brian Combs — the more I was pulled into the story. What really sparked interest and inspiration in my mind was the juxtaposition between who was being portrayed in the painting — those living on the streets and battling addiction and mental illness — with the ancient technique of fresco painting, literally turning to stone the images of those who have been ignored by society. Throughout the production process, that idea kept me going.”

Regarding the finished product, “I am pleased with the film,” he said. “I was the director, cinematographer, editor, and producer — so I’m happy I was able to pull off anything, especially given COVID! I did have some cinematography assistance in a couple of scenes as well as some editing assistance, but this was largely an individual passion project and I’m really proud of how it turned out.

“I hope audiences can leave with a feeling of empathy and compassion for those around them who are battling homelessness, addiction, and mental illness — or just all of us battling daily struggles. Too often, we’re stuck in our own silos and I hope this film can make folks a little more aware and curious about the stories of those around them, especially those stories that have largely been silenced and ignored.”

The 24th annual RiverRun International Film Festival is scheduled to take place April 21-30, 2022, and according to Davis over 1,000 submissions have already been received. The final submission deadline is Dec. 15th. For more information, call (336) 724-1502 or visit the official website: https://riverrunfilm.com.