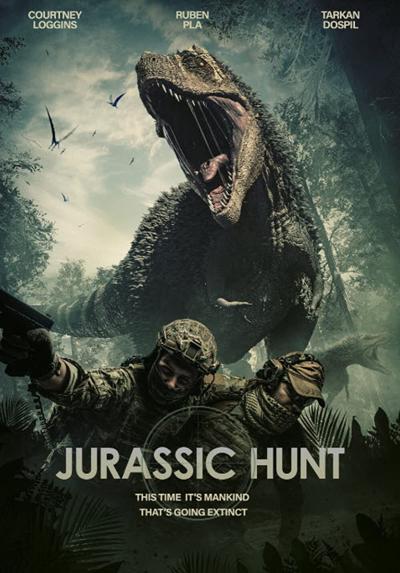 The purveyors — as opposed to creators — of Jurassic Hunt evidently believe that audiences starved for big-screen dinosaur action will watch anything involving dinosaurs, in lieu of waiting for Jurassic World: Dominion, which isn’t due for theatrical release until next year.

Even by the lowest standards, Jurassic Hunt ranks pretty low. There’s a difference between fun junk and amateurish junk, and this film qualifies entirely for the second category. The CGI special effects are hardly up to par with the original Jurassic Park — which was released 28 years ago, in 1993 — and don’t even compare to the low-rent “heights” of the Roger Corman rip-off Carnosaur (also ‘93).

The no-impact narrative follows a band of macho morons on a weekend excursion to hunt dinosaurs, ostensibly under the watchful eye of transparently corrupt park manager Lindon (Joston Theney), who boasts that the rich and wealthy are lining up to participate. But given that the first night out several hunters are slaughtered indicates that repeat business may be a problem.

Echoing Sigourney Weaver’s breakout role in the original Alien (1979), Courtney Loggins makes her feature debut as the token, tough-talking Parker, the only female hunter on this dire excursion. She’s attractive enough and displays enough hints of talent to hope she’ll go on to bigger and (much) better things, and Theney is nothing if not lively as the resident heavy. Give them points for trying, against insurmountable obstacles.

The combination of cheesy special effects, dopey dialogue (courtesy screenwriters Jacoby Bancroft and Jeffrey Giles), and sluggish direction by editor/producer Hank Braxtan (whose credits include the 2018 rip-off Snake Outta Compton) is a lethal one. Jurassic Hunt isn’t even good for unintentional laughs, and its 84-minute running time seems much longer. Better to wait for the real thing when Jurassic World: Dominion opens.