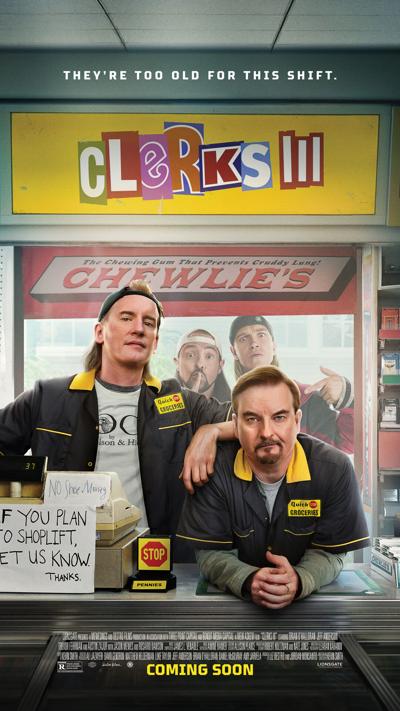 Nearly 30 years on, filmmaker Kevin Smith is clearly in a reflective mood with Clerks III, the long-awaited — and possibly final — “installment” of the big-screen trilogy he kicked off with Clerks in 1994. The cult success of Clerks made Smith an instant celebrity, one who was hailed as a personification of the Generation X independent filmmaker. He even embarked on college lecture tours — and filmed them, no less.

Clerks III finds the titular duo Dante (Brian O’Halloran) and Randal (Jeff Anderson) back in action and still manning the counter of Quick Stop Groceries in the heart of New Jersey suburbia. They still take time to play games of hockey on the roof. The video store next door is long closed and is now a marijuana dispensary, so resident stoners Jay (Jason Mewes) and Silent Bob (Smith) have joined the workforce.

When Randal unexpectedly suffers a heart attack, he undergoes a spiritual awakening of sorts and is determined to make his life meaningful. To this end, he decides to make a movie about his life. In other words, he wants to make Clerks (even if the proposed title is “INConvenience”), with everyone reprising his or her own “real” character. Having suffered a heart attack himself in 2018, Smith brings an unmistakably autobiographical approach to the proceedings. The shadow of mortality looms large here.

The film hits its stride depicting the production of the film-within-a-film, as Smith sends up the nature of independent filmmaking — a subject he is well versed in — as well as his own films. There’s a marvelous sequence in which Randal and Dante, acting as the film’s producers, audition potential actors, most of whom are quite familiar (and best not to reveal them here), and the moments where actors argue their motivations and fidelity to Randal’s script are equally funny. Smith also takes affectionate jabs at other filmmakers, and the pop-culture references (comic books, Star Wars, etc.) are non-stop. It’s particularly interesting for Clerks fans to observe how Smith re-creates and re-enacts scenes from his breakout film.

O’Halloran and Anderson remain good company throughout, their chemistry sparkling in the self-indulgent glow of Smith’s trademark brash humor. Mewes and Smith continue to steal scenes aplenty, and it’s nice to note that Smith looks good, having slimmed down somewhat and even sporting a tan. Rosario Dawson is luminous as Dante’s lost love Becky, and Marilyn Ghigliotti — who bypassed Clerks II (2006) — comes on like gangbusters as his ex-girlfriend Veronica, still simultaneously holding a grudge against and a torch for him after all these years.

Not all the jokes work, which is par for the course. Encoring from Clerks II, Trevor Fuhrmann’s Elias makes a silly transition from chest-thumping Christian to fire-breathing Satanist. It probably read funnier on the page than it plays on the screen, although Fuhrmann does his darnedest, and it’s absolutely in keeping with Smith’s life-long fascination with religion (which he explored in the controversial 1999 comedy Dogma). The lack of restraint in Smith’s comedies doesn’t endear him to everyone, but it’s certainly distinctive. His is a unique voice.

There are some extremely awkward transitions between human drama and lowbrow comedy, yet there’s no mistaking that Clerks III has a heart. Smith is not just paying homage to himself, but his past, his friends, and his home state of New Jersey. That affection is undeniably broad at times, but it’s palpable throughout. Although he hasn’t closed the door on follow-ups, Clerks III definitely brings the trilogy full circle.