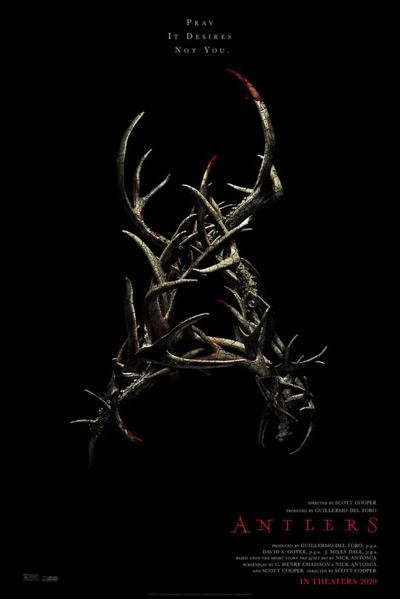 The title Antlers isn’t misleading but is vague enough to possibly confuse horror fans, who might expect a film about a ravenous reindeer, rather than one about a diabolical Native American spirit. The spirit, which does sport antlers, is known as a “Wendigo,” but that title was previously used for a (pretty good) 2001 film, so Antlers it is.

This adaptation of executive producer/screenwriter Nick Antosca’s short story The Quiet Boy was completed nearly three years ago but has sat on the Fox Searchlight shelf during the COVID-19 pandemic. The delay is in no way related to the film’s quality. This is an extremely well-made genre piece, with atmospheric cinematography by Emmy winner Florian Hoffmeister and a nerve-jangling score by Javier Navarette, who earned an Oscar nomination for Pan’s Labyrinth (2007).

The setting is a small logging and mining town in Oregon, which appears in the throes of economic and emotional despair. Much like the setting, most of the principal characters are cloaked in gloom. Julia Meadows (Keri Russell), the local schoolteacher, has returned home following the death of her father, an alcoholic whose abuse sent her packing years before. Living in the house where she and her brother Paul (Jesse Plemons) grew up, she’s forced to confront the demons of her past, and her longing gazes at liquor bottles in the grocery store indicate it’s an ongoing battle.

Julia becomes concerned by the behavior of one of her students, the shy and withdrawn Lucas Weaver (Jeremy T. Thomas). Having been the victim of abuse herself, she recognizes the telltale signs of abuse in others, but Paul, also the local sheriff, is powerless to do anything about it — at least until people start disappearing and bodies start turning up, torn to shreds. (The squeamish are hereby forewarned.)

Unlike many horror films, Antlers has zero laughs. It doesn’t send up or poke fun at the genre. It’s played completely straight and completely serious. This may not endear it to fun-seeking horror buffs, but it is a distinct change of pace. This is that rare horror film that will likely engender more critical attention than box-office bucks.

The screenplay, by Antosca, Henry Chaisson, and director Scott Cooper, grafts some pretty heavy dramatic threads onto a traditional genre piece. The traumas these characters have endured are just as bad, if not worse, than the supernatural menace they eventually encounter. Each one has been damaged, indeed irreparably, even before the horror erupts. There’s a distinct feeling that no matter what happens, things will never be right in their lives.

Having packed on a few pounds, Plemons bears an uncanny resemblance to the late Philip Seymour Hoffman, but within the limited confines of his role, he exudes a weary sincerity that is quietly affecting. Sheriff Paul’s in over his head — and he knows it — but he’s trying to do the right thing. Russell eschews any trace of glamour as the earnest Julia, who believes that by helping Lucas, she’s also helping herself. She recognizes the victim in Lucas because she’s been through similar circumstances herself.

The sturdy cast also includes Graham Greene, as a retired lawman who sheds some light on the Wendigo legend, the ever-reliable Amy Madigan as the school principal, and Rory Cochrane as Paul’s dutiful deputy — the sort of sidekick role that doesn’t portend a lengthy lifespan.

Best of all is Thomas, in an impressive feature debut. With his deep, doleful eyes and almost painfully reticent presence, Lucas seems to carry the weight of the world on his small shoulders. Constantly bullied at school and basically betrayed by his family, his attempts to maintain his secrets only make the problem worse — symbolizing how the circle of abuse can, and likely will, continue. The film’s obligatory twist ending does likewise. Antlers is not without its drawbacks, including a somewhat choppy storyline (no pun intended), but its attempt to link real-life horrors with supernatural ones is a laudable one. In addition to being scary, Antlers is somber and even sorrowful. It’s worth a look, for those who can take it — and that statement is not to be taken lightly.