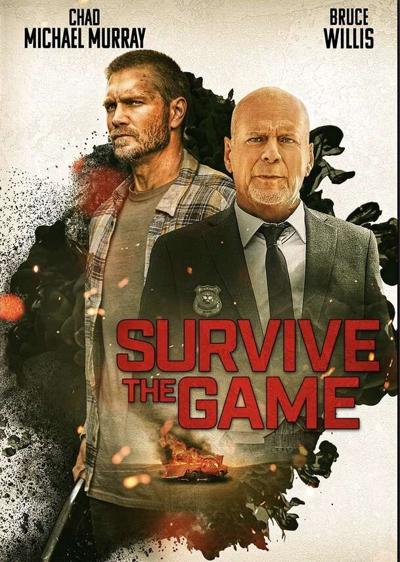 Survive the Game, directed by James Cullen Bressack, is the worst kind of bad movie. It’s not bad enough to be unintentionally funny or bad enough to make one lament the waste of talent involved. It’s a lazy, inept movie that barely has a reason for existing. The filmmakers, including first-time screenwriter Ron Peacock (who has nowhere to go but up), expend so little effort that it’s as if they hold the audience in contempt. The only surprise here is how poorly a conventional storyline can be rendered for the umpteenth time.

The simple-minded story begins when grizzled, aggressive cop Cal (Swen Temmel) and his wearier, wiser partner David (Bruce Willis) get the drop on Mickey (Zack Ward) and Violet (Kate Katzman) during some sort of undefined, but undoubtedly illegal, warehouse transaction. As villains, Mickey and Violet are straight out of Central Casting 101: He’s got the swagger, the bleach-blonde hairdo, and tattoos galore, while she resembles a third-rate Harley Quinn. They’re young, they’re in love, they kill people, and they’re annoying to the nth degree.

After the ensuing shoot-out — one of many in which everyone’s aim is off — Cal pursues Mickey and Violet in one of the slowest car chases in recent memory. In the confusion, he has managed to leave the wounded David behind, so that he can be conveniently captured by Mickey and Violet’s boss, Frank (Michael Sirow). The unflappable, black-clad Frank constantly makes threats, yet never seems to make good on them. He’s simply a bore who’s full of hot air.

Everyone ends up at the farm owned by Eric (top-billed Sean Michael Murray), a decorated combat veteran disillusioned by the recent deaths of his wife and daughter in a car accident. (Needless to say, he was driving.) Drowning his sorrows from his handy flask, he’s made a vow never to kill again. Naturally, that vow will soon become void.

Characters are held hostage, then escape, then are recaptured, only to escape once more. Bullets and fists fly, but nothing can save Survive the Game from endless, aggravating repetition. This is easily one of the most boring action films in a long time, and in one scene where Eric blasts one of the bad guys, someone forgot to dub the sound of the gunshot (!). Such inattention to detail is indicative of just how shoddy and sloppy the film is.

It all culminates in what could be described as the typical Mexican stand-off, except that the film was shot in Puerto Rico, which must make it a “Puerto Rican stand-off,” and there is absolutely no surprise how it all turns out. It just takes 97 endless minutes to get there.

The acting, for the most part, is dreadful. Then again, there really isn’t much the actors can do. They have nothing to work with. Baywatch beauty and one-time Playboy Playmate Donna D’Errico turns up as one of the baddies, and the nicest thing that can be said about her performance is she still looks good.

Willis, at least, seems more engaged here than he did in the recent Midnight in the Switchgrass, but it hardly matters because, incredibly enough, this is a worse movie, and it’s still yet another waste of his talents. If that weren’t enough, Willis and Murray co-starred in a home-invasion thriller — for some of the same producers, no less — called Survive the Night, which was released barely a year ago. Let’s hope their careers can “survive” any further embarrassments.

- Survive the Game is available on-demand and digital, as well as on DVD ($19.98 retail) and Blu-ray ($21.99 retail) from LionsGate Home Entertainment.