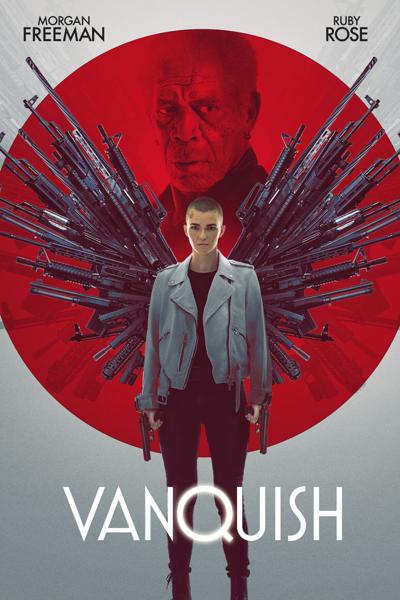 That Morgan Freeman and Ruby Rose headline Vanquish doesn’t make this dismal, dreary melodrama any better. It actually makes it worse because it utterly wastes them both — particularly Freeman, who looks terminally bored and literally phones in his performance. Rose, never a particularly expressive actor, stalks through her tight-lipped, one-dimensional turn, looking as if she wishes she were somewhere else.

Freeman, like all actors, has made bad movies in the past – The Bonfire of the Vanities (1990) and Dreamcatcher (2003) come to mind – but those at least were ambitious failures. They tried, and they failed. Not for a moment does Vanquish ever appear to be trying. Freeman recently provided the voice for a talking crab in a bubble-headed comedy called Barb and Star Go to Vista del Mar. Not only is that a better movie than Vanquish, but the actor gave a more believable and nuanced performance.

Vanquish doesn’t even try to be a B-movie distraction. It’s merely a slick compendium of clichés and dopey plot “twists” that yields almost nothing.

Once a highly decorated police officer, Damon Hickey (Freeman) was critically injured in a shoot-out years ago. Now he’s retired and paralyzed, living in an enormous post-modern mansion stocked with weapons and high-tech gadgetry. Evidently, he had a good pension plan.

Victoria (Rose) is Damon’s part-time caregiver, and a single mother whose ailing young daughter (Juju Journey Brenner) requires expensive medical treatment. Damon offers Victoria a solution of sorts by blackmailing her into going out and picking up bags of loot from a variety of unsavory underworld characters.

We learn that Victoria was once a drug courier for the Russian mob, which would undoubtedly explain Rose’s Australian accent (Moscow by way of Melbourne?). What’s more – or less, as the case may be – Victoria’s brother himself was a drug courier, and some of the foul folk she encounters were responsible for his death. Rest assured, she pays them back in kind. But then, we already knew that, didn’t we?

While Damon issues orders from his souped-up wheelchair as if he’s playing a video game, Victoria goes about her bloody business. One of the more remarkable, or absurd, things about Vanquish is that for all the damage and destruction she wreaks, the only cops around are Damon’s corrupt old cronies, who bide their time in a diner exchanging pithy tough-guy talk that’s as tiresome as the rest of the film.

The main culprit here is co-writer/executive producer/director George Gallo, who wrote the screenplay for Brian De Palma’s amusing mob comedy Wise Guys (1986) and the very funny Robert De Niro/Charles Grodin vehicle Midnight Run (1988). His directorial debut was the modestly engaging 1991 comedy 29th Street. He was also responsible for the dopey 1994-yuletide comedy Trapped in Paradise, which starred Nicolas Cage, Jon Lovitz, and Dana Carvey as extremely unlikely brothers trying to flee a bucolic town on Christmas Eve after having robbed a bank. Frank Capra, it wasn’t, by a long shot, but it was better than this, which is easily the nadir of Gallo’s career.

Vanquish isn’t a total loss, although it comes extremely, dangerously close. For one thing, it eventually ends, although not soon enough. Anastas Michos’s cinematography is appropriately flashy and would do justice to a better film. Finally, there’s the all-too-brief appearance of Joel Michaely as Rayo, an outrageously swishy drug lord whom Victoria encounters on one of her “stops.” The character may not be politically correct, but Michaely provides the film with its only levity and liveliness. So, naturally, he is dispatched within five minutes of his introduction.

Early on, Victoria tells Damon, “this whole thing is like a bad dream.” Consider that fair warning.

- Vanquish is available on Apple TV and anywhere you can rent movies, as well as on DVD ($19.98 retail) and Blu-ray ($21.99 each), each boasting audio commentary.