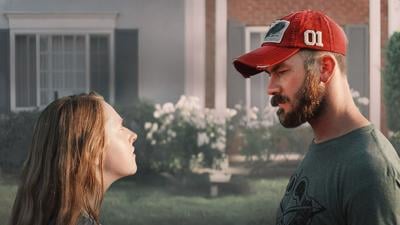 Joe, a tow-truck driver, has been flirting with the redheaded woman with a North Carolinian accent who needs a new battery in her stranded car. Kelli seems more amused than annoyed, at least until Joe, who is preparing to run her credit card, asks to see an I.D.

In her North Carolina driver’s license photo, Kelli wears a hijab. The expression on her face when she hands her I.D. to Joe suggests she anticipates his consternation, but probably not his next question.

(YES! Weekly won’t spoil the line, which is hilariously clueless.)

It’s also something that the real “Joe” said to internationally published Triad author and award-winning podcaster Deonna Kelli Sayed when Sayed’s car broke down in Greensboro in 2015. Sayed told the real story in her essay, “Contested Whiteness: True Tales of a White Muslim Woman.”

“I believe I came across Deonna’s piece on social media,” writer/director Ballivian told YES! Weekly in a recent email. “I didn’t know her then, and reached out to her almost immediately after I read it. I laughed so hard when I read Deonna’s piece because it rang true to my own experiences with being a post-hijabi white-passing Muslim.”

In a June 22 post at Islamicity.org, Ballivian wrote about how she drawn to Sayed’s essay because it spoke of shared experience.

Deonna and I are the same age. I am an "unidentifiable Muslim," considered "white" on face value, living post-hijab and having walked through different levels of life, love, marriage, divorce, children and the spirituality tied to these and independently.

According to Ballivian, both her film and Sayed’s essay implicitly ask the same question: Who is identified as ‘American’ by Americans?

“One example is when you are hijab-less,” Ballivian wrote. “You can hear the conversations without filters that people have about Muslims. Many of us have had to stop people from embarrassing themselves further as they share their xenophobic thoughts out loud. I once heard a conversation that involved talking ill about Muslims and they spoke in Spanish so that I couldn’t understand, which makes me laugh from the absurdity of it all. My Spanish is pretty fluent since I’m Latina.”

Where Sayed’s essay ends with another clueless observation from Joe, Ballivian’s film goes past that point in the encounter to close on a note of broader comedy, with the fictional Kelli seizing the power in the situation and literally sending Joe fleeing.

But Ballivian told YES! Weekly that any Muslim will recognize the unease that Sayed acknowledged in the following sentence:

I realize that I am in an enclosed truck with the kind of man who is excited about Texas being its own independent territory, and he has a Muslim sitting next to him, and that Muslims probably won’t be welcomed in the kind of Texas that no longer desires to be part of America.

“Yes, that’s a very important sentiment,” Ballivian wrote in an email. “I actually have a shot of ‘Kelli’ looking at the door after Joe’s Texas speech. I think that although this thought is very strong and carries a distinct and legitimate fear. Kelli, both in real life and in character, have better street smarts than most to get themselves out of this situation.”

In a Facebook message, Sayed told YES! Weekly that the incident happened about a month and a half after Donald Trump announced he would be a candidate in the 2016 election.

“I knew something was shifting in America at that moment, but I couldn’t define it. During that moment in the cab of the truck, I realized that I was directly in the face of whatever was about to emerge in America. I didn’t know how to respond to it (at that time), as it was so counter to what to that I thought to be the American experience.”

Ballivian said the film has been well-received by audiences.

“It’s been tough interacting with them because the film festival circuit this year has been all online. So, when we have Q&As they’re usually with fest programmers via Zoom, if at all. We were supposed to screen theatrically at a festival in Spain this month but they went into lockdown, so it’s pushed indefinitely. The response is mostly people who appreciate diving into such taboo topics as religion, religious identity and nationalists, especially right now. Many say they want to see more of this film expanded into other episodes to hear more of this dialogue.”

Ballivian also noted that practicing Muslims laugh with recognition at the moment when Kelli’s phone plays the athan, the Islamic call to prayer, and Joe reacts in confusion.

“It’s happened to almost everyone in different quiet settings with non-Muslims, I could probably make a comedic short just about this.”

Joe & the Shawl, which won the Audience Award at the Vox Feminae Film Festival in May, can be viewed on Vimeo and YouTube.

Ballivian also wrote and directed Driving to Zigzigland, a Palestinian-American comedy feature that had over 100 festival screenings and won international awards. She has two feature-length projects in development.

"Hijrah Baby is a feature screenplay about a Bosnian-American Muslim student who falls in love with a Syrian-American ISIS fighter online and travels to Syria to marry him, only to be trapped in a hell she can’t escape from until the day ISIS falls. Sleeping on Stones, which was selected for the Sundance Screenwriters Lab, is a story about Jacob, a 10-year-old Jewish boy from Brooklyn, who moves to the Palestinian town of Hebron with his parents as settlers. To his parents’ dismay, Jacob’s best friends and first love are Palestinian and he comes of age in the beauty and brutal occupation of Hebron until he turns 18, when he becomes a conscientious objector, refusing mandatory enlistment in the Israeli military."