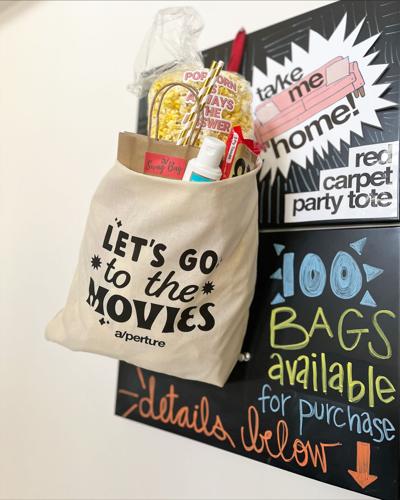 The 94th annual Academy Awards ceremony will be held on March 27, 2022, and broadcast live on ABC and a/perture cinema in Winston-Salem is celebrating Hollywood’s biggest night in its own unique fashion.

To celebrate a/perture’s Annual Red Carpet Party, a special tote bag is available that includes all the ingredients for a fun-filled Oscar night, including wine, a family-sized bag of fresh popcorn, official 2022 Oscar ceremony bingo cards and chips, Solarté shower cream, a discount coupon for an upcoming Winston-Salem Symphony presentation, and much more. All items in the bag have been generously donated by local businesses, which means that 100% of the proceeds will go toward supporting a/perture’s annual operating expenses.

There are only 100 Red Carpet Party tote bags available, each selling for $100. They can be picked up in the main gallery of the Milton Rhodes Center for the Arts (251 N. Spruce Street, Winston-Salem) on Sunday, March 27 between 3 and 6 p.m. To order a tote bag, visit https://aperturecinema.com/red-carpet-party-home/.

Each year, prior to the Oscars ceremony, a/perture assembles a dinner & movie raffle to celebrate the nominated films. This year, 11 raffles have been established for each of the 10 films nominated for Best Picture and a “kid-friendly” version to celebrate the films nominated for Best Animated Feature. All raffle items include dinner for two as well as other special items unique to each nominated film. Each raffle ticket is $10 and can be purchased at the front counter of a/perture cinemas (311 W. Fourth Street, Winston-Salem) or via the individual links here: https://aperturecinema.com/2022-best-picture-raffle/.

According to Lawren Desai, curator and executive director of a/perture cinema, these special, Oscar-related specialties “have been popular in the past because it’s a unique way to do a fund-raising gala — built around Hollywood’s biggest night, celebrating the cinema, and cheering on your favorite film. What’s not to like about that?”

Jane Campion’s The Power of the Dog leads all films with a total of 12 Oscar nominations (including Best Picture and Best Director) and is widely considered the odds-on favorite, but Desai — like many others — has her own personal favorites she’ll be cheering on.

The decision to shorten the televised ceremony, reportedly at the behest of ABC, in which the presentation for eight categories will take place in a pre-taped ceremony before the broadcast, has rankled fans and even Academy members, and Desai concurs. “Like many others, I am disappointed the (live-action and animated) Shorts awards were pulled from the live broadcast. We have been running the Oscar Shorts as a program for 13 years,” she said.

“The exhibition idea has been swimming in my head for a while, inspired by a colleague who several years ago shared how he had commissioned an artist to recreate two paintings that were on the wall in the film Amelie,” Desai explained. “I just thought that idea was so cool and original, and I wanted to do something similar here in Winston-Salem. So I reached out to artists to invite them to participate in an exhibition that was inspired by cinema, with the only parameter being that the piece had to be original and inspired by something related to the cinema — a film, a scene in a film, a cinematic concept, characters in films — really, it could be as broad as they wanted it to be. All the pieces will be for sale as a fund-raiser for a/perture, but the exhibit will be free for the public to see while it hangs in the main gallery at the Milton Rhodes Center for the Arts for all of April. It’s been a lot of work, but it is going to be so totally worth it when the pieces are hung in a few weeks.”

“Cinema Beyond the Screen” will open Monday, March 28 (the day after the Academy Awards ceremony) and run until Thursday, April 28. Purchasers of a/perture’s Red Carpet Party tote bags will be invited to a sneak peek at the exhibit on Sunday, March 27 from 3-6 p.m., during bag pick-up. A/perture patrons are invited to attend the gallery reception and mingle with the artists and fellow film fans on Friday, April 1 from 5-7 p.m. The official website for the Milton Rhodes Center for the Arts is https://www.intothearts.org/facilities.

For more information about a/perture cinema, call 336-722-8148 or visit the official website: https://aperturecinema.com/.