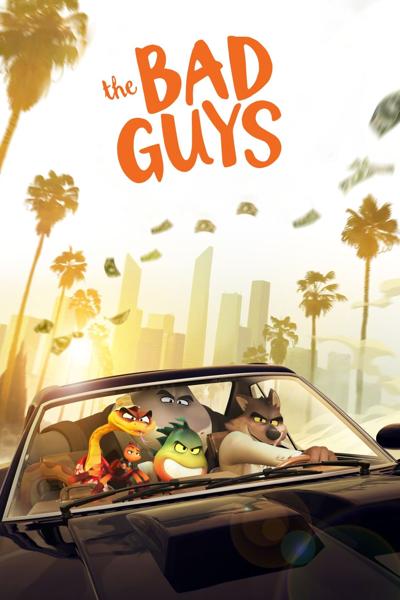 The Bad Guys, based on Aaron Blabey’s best-selling series of children’s books, is an entertaining animated feature that details the misadventures of its title miscreants, a larcenous quintet of critters whose motto is “Go bad, or go home.”

Leading the pack, so to speak, is Wolf (voiced by Sam Rockwell), who brings an insouciant swagger to his merry misdeeds, aided and abetted by Snake (voiced by Marc Maron), Shark (voiced by Craig Robinson), Tarantula (voiced by Awkwafina), and the perennially flatulent Piranha (voiced by Anthony Ramos). Boasting their collective badness, their reputation precedes them, as people tend to recoil in their presence, knowing full well that an elaborate heist or scam is sure to follow.

The latest target of The Bad Guys is the Golden Dolphin, a statue awarded each year to the city’s most esteemed citizen. But when the heist is foiled, the intended recipient of the prize — Prof. Marmalade (voiced by Richard Ayoade) — lobbies on their behalf that they be placed under his tutelage. This enrages local police chief Misty Luggins (voiced by Alex Boorstein), who has long made it her mission to vanquish The Bad Guys, but Gov. Diane Foxington (voiced by Zazie Beetz) is more amenable to the idea of rehabilitation.

Remarkably, it’s Wolf who first begins to feel remorse over his past actions, much to the chagrin of his cohorts, but being good makes him feel good. But just when it seems like The Bad Guys have turned a corner into chivalry, they are double-crossed by none other than Prof. Marmalade, whose billion-dollar scheme surpasses anything they’ve ever attempted in the past. They may be “bad,” but he’s worse — and now they’ve got to rejoin forces to bring him to justice and clear their own names.

The opening sequence in The Bad Guys, in which Wolf and Snake discuss their plans, smartly pays homage to Martin Scorsese and Quentin Tarantino — sans profanity, of course — and will undoubtedly amuse older viewers. After that, the film settles into a more exclusively, family-friendly groove. The kids will surely revel in the gadgets, gizmos, hard-driving, high-flying action, and director Pierre Perifel (making his feature debut) never lets the momentum lag. If a gag falls flat, no matter; the film is on to the next one, and the next one. The pacing is jazzy and the animation flashy, all the better to enthrall the kids, and some of the sight gags reach the level of lunacy of the classic Looney Tunes of yesteryear — including a climactic bridge jump that may be the film’s highlight.

There’s a definite Ocean’s Eleven vibe here, replete with references to George Clooney, and Wolf is the lupine equivalent of the suave, self-assured mastermind with a quip for every occasion. Like the Ice Age and Madagascar franchises, the voice cast exhibits a palpable chemistry, bouncing off each other — sometimes literally — with aplomb. Rockwell enjoys some snappy exchanges with both Maron and Beetz, and Lilly Singh does a nice turn voicing the prototypical bubble-headed news anchor reporting on The Bad Guys’ crime spree.

Needless to say, at the end of the day, good triumphs over evil, and The Bad Guys have learned their lesson … or have they? If The Bad Guys is meant to launch a franchise, it’s off to a good, fun start. There’s an old adage that crime doesn’t pay, but here it pays off.