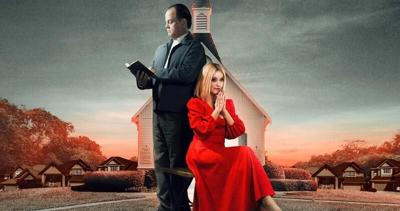 Horror comedies tend to be a mixed bag, and Jakob’s Wife is no exception, but there’s certainly enough in screenwriter/director Travis Stevens’s ambitious attempt to make it a worthwhile, if occasionally bumpy, excursion.

Barbara Crampton, who earned her “scream queen” stripes with the back-to-back H.P. Lovecraft adaptations Re-Animator (1985) and From Beyond (1986), occupies center stage as the titular character, Anne Fedder. Married 30 years to small-town minister Jakob (Larry Fessenden), Anne is bored. She feels neglected, is at loose ends, and has lost her zest for life.

Although Anne is able to rebuff the advances of old flame Robert Rusler (fondly remembered for his turn in 1985’s A Nightmare on Elm Street Part 2), she is not able to prevent his demise mere moments later, nor being bitten by “the Master” (Bonnie Aarons), a ghoulish vampire who’s a dead – or undead – ringer for Max Schreck’s original Nosferatu.

Actually, being undead makes Anne feel more alive, despite some major adjustments to her lifestyle, including a thirst for human blood. But she retains enough of her humanity in realizing the risk she poses to the people around her, and there’s also the matter of the Master, who’s still on the prowl and constantly urging her to do wrong.

Jakob’s Wife could be perceived as an analogy for menopause, with Anne’s emotions running rampant as she undergoes considerable physical changes. It’s that sort of sly touch that distinguishes the film from much of its ilk. This doesn’t reach the heights of the instant 2014 cult classic What We Do in the Dark – which catapulted the careers of Jemaine Clement and Taika Watiti — but it’s a worthy successor of sorts.

Stevens deftly balances the humor and horror for much of the film’s running time. There are some spooky moments, and Aarons (inspired casting) is legitimately scary, with Tara Busch’s effective score augmenting the suspense to a great degree. It should also be noted that the blood gushes freely throughout, so the squeamish are forewarned. (Others, of course, will be delighted.)

As befits her status as a cult icon, Crampton has frequently appeared in various horror and fantasy films, sometimes in cameo roles, but she’s also shined in more mainstream roles, such as the impatient Reverend Mother in UNCSA School of Filmmaking graduate Zach Clark’s offbeat 2016 comedy Little Sister. Here, she enjoys one of her best roles ever, a full-fledged star turn that is sure to delight her legion of fans. It’s easy to see what drew her to the role, and she even doubles as one of the film’s producers.

Fessenden, a genre favorite himself both as an actor (I Sell the Dead, Stake Land, Late Phases) and as a filmmaker (Wendigo, The Last Winter, Beneath), has a less showy role than Crampton’s, but he imbues Jakob character with a quirky dignity. Jakob’s not a bad guy, merely one who takes things – including his wife – for granted. He is therefore galvanized to both save his wife and to protect his community from further harm. Much as Anne must hold on to the remnants of her humanity, Jakob must dredge up whatever heroism lurks within him.

Jakob’s Wife plays fast and loose with traditional vampire mythology. The bloodsuckers are able to move about in daylight (although they prefer it shady) and, as Jakob is a minister, his and Anne’s house is adorned with a number of crucifixes, which don’t appear to affect her. On the other hand, the wooden stake remains a trusty weapon in vanquishing a vampire.

The film’s wrap-up is, however, something of a letdown. In a way, the narrative has boxed itself into a corner by that point, and a number of loose ends are left dangling, but the way it’s constructed, a sequel isn’t out of the question. Might that have been the intent all along? Who can say – or slay – for sure?