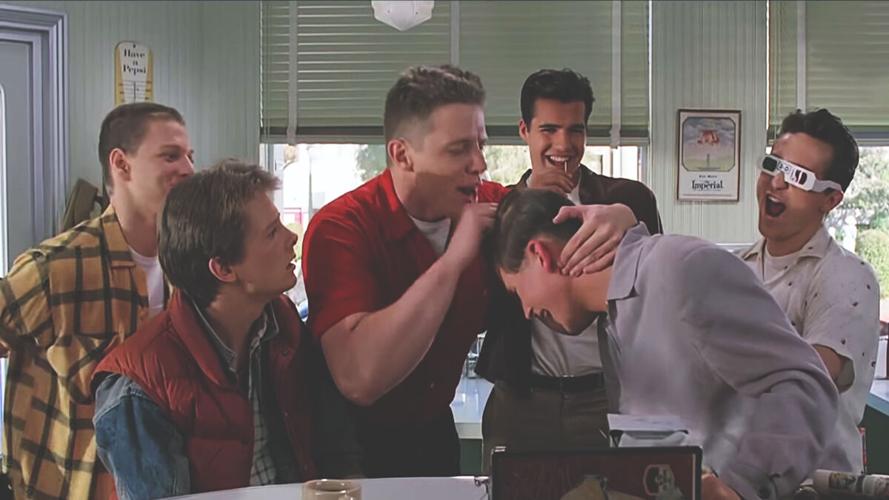 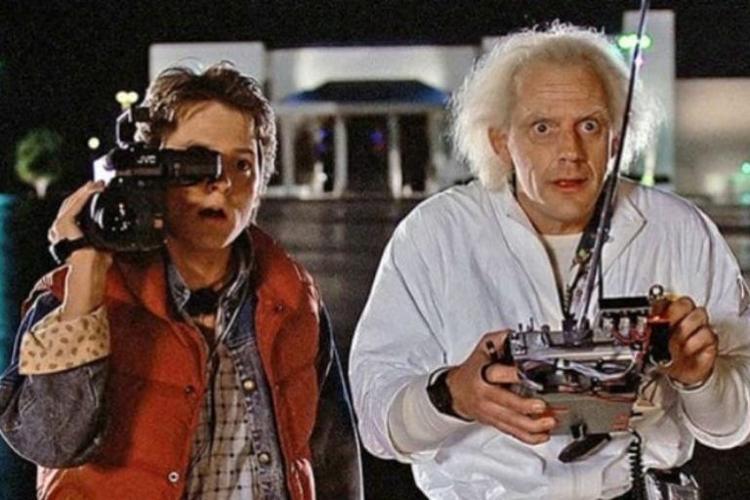 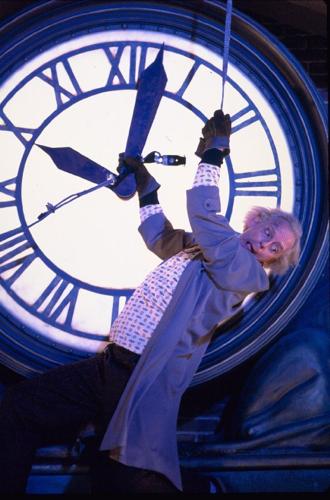 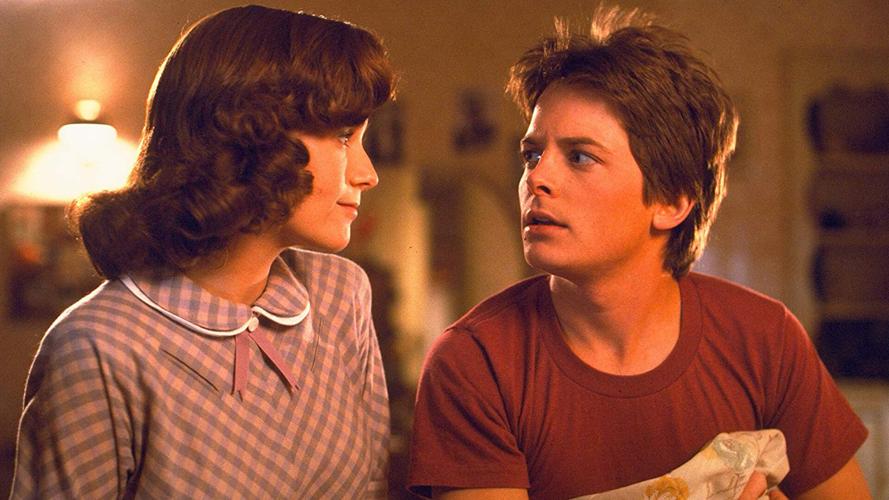 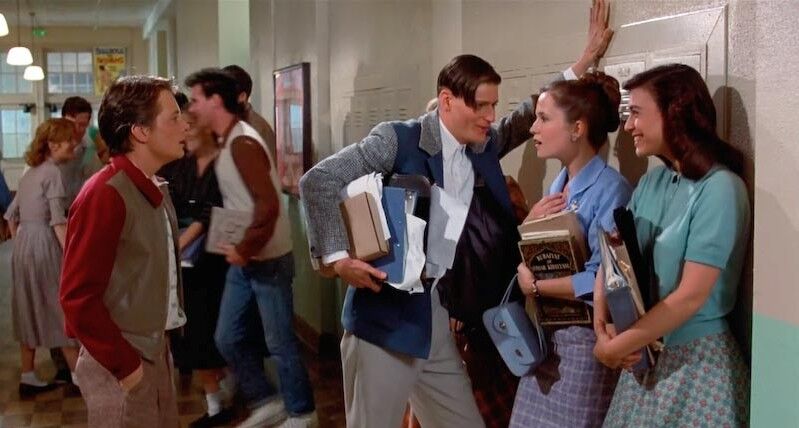 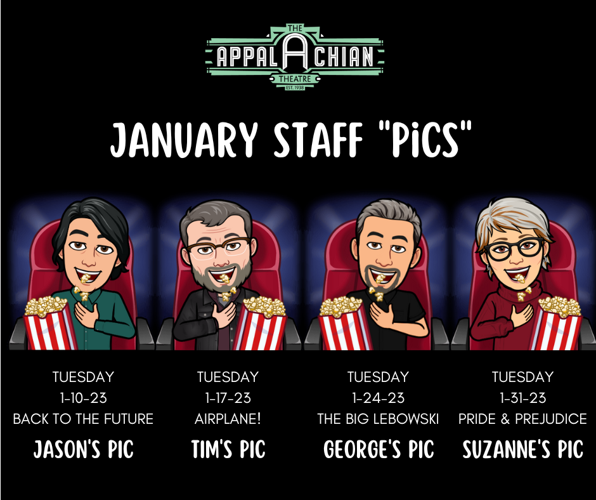 Now the App Theatre staff finally gets to have their say!

January 2023 will showcase favorite Classic Movie "Staff Pics" with five films scheduled at 7 p.m. on each Tuesday throughout the month. App Theatre’s Patron Services Manager Jason Deathridge chose “Back to the Future” for a screening on January 10. Finance Director Tim Early selected “Airplane!” on January 17, with Technical Director George Antczak’s choice of “The Big Lebowski” set for January 24. “Pride & Prejudice” on January 31 was the “pic pick” of App Theatre Executive Director Suzanne Livesay.

In addition, the entire staff chose the popular animated film “Frozen” for screening at a familyfriendly time of 2 p.m. on Saturday, January 21 in the historic theatre on King Street in downtown Boone, NC.

Note that all Films@TheApp are shown without movie previews or trailers, so please arrive a few minutes before the scheduled start time to secure tickets and purchase concessions. The general admission ticket price is just $6 per person, and attendees under the age of 13 must be accompanied by a parent or guardian.

“Back to the Future” is a 1985 American science-fiction film directed by Robert Zemeckis and written by Zemeckis and Bob Gale. It stars Michael J. Fox, Christopher Lloyd, Lea Thompson, Crispin Glover, and Thomas F. Wilson. Set in 1985, the story follows Marty McFly (Fox), a teenager accidentally sent back to 1955 in a time-traveling DeLorean automobile built by his eccentric scientist friend Emmett "Doc" Brown (Lloyd). While in the past, Marty inadvertently prevents his future parents from falling in love — threatening his existence — and is forced to reconcile the pair and somehow get back to the future.

Gale and Zemeckis conceived the idea for “Back to the Future” in 1980. They were desperate for a successful film after numerous collaborative failures, but the project was rejected over 40 times by various studios because it was not considered raunchy enough to compete with the successful comedies of the era.

A development deal was secured with Universal Pictures following Zemeckis's success direction of “Romancing the Stone” (1984). Fox was the first choice to portray Marty but was unavailable; Eric Stoltz was cast instead. Shortly after principal photography began in November 1984, Zemeckis determined Stoltz was not right for the part and made the concessions necessary to hire Fox, including re-filming scenes already shot with Stoltz and adding $4 million to the budget. “Back to the Future” was filmed in and around California and on sets at Universal Studios.

Following highly successful test screenings, the release date was brought forward to July 3, 1985, giving “Back to the Future” more time in theaters during the busiest period of the theatrical year. The change resulted in a rushed post-production schedule and some incomplete special effects, but the work was a critical and commercial success, earning $381.1 million to become the highest-grossing film of 1985 worldwide. Critics praised the story, its humorous elements, and the cast, particularly Fox, Lloyd, Thompson, and Glover. It received multiple award nominations and won an Academy Award, three Saturn Awards, and a Hugo Award. Its theme song, "The Power of Love" by Huey Lewis and the News, was also a success.

“Back to the Future” has since grown in esteem and is now considered by critics and audiences to be one of the greatest science-fiction films and among the best films ever made. In 2007, the United States Library of Congress selected the film for preservation in the National Film Registry.

The film was followed by two sequels, “Back to the Future Part II” (1989) and “Back to the Future Part III” (1990). Spurred by the film's dedicated fan following and effect on popular culture, Universal Studios launched a multimedia franchise, which now includes video games, theme park rides, an animated television series, and a stage musical. Its enduring popularity has prompted numerous books about its production, documentaries, and commercials.

While the App Theatre’s online ticketing system is accessible 24/7, customers can avoid the online service fees by visiting the lobby box office between 11 a.m. and 3 p.m. from Tuesday through Friday, or one hour prior to showtime for each film. For a complete performance schedule of all upcoming events, or to sign up for the theatre’s e-blast distribution list, visit the organization’s website at www.apptheatre.org

Events, days, dates, times, performers, and prices are subject to change without notice.

About the Appalachian Theatre

The mission of the Appalachian Theatre of the High Country is to revitalize and sustain this historic community touchstone as a quality home for diverse artists and audiences with a special focus on programs that celebrate our distinctive Appalachian heritage and enhance our capacity to serve as an economic catalyst for Boone and the High Country. Once a gorgeous 999-seat Art Deco movie house, the building closed in 2007 and sat empty and gutted for years. On October 14, 2019, the Appalachian Theatre reopened its doors after a $10 million renovation that brought the distinctive Art Deco details back to this historic theatre and created a new 629-seat, state-of-the-art, acoustically pristine venue for live concerts, films, plays, and dance performances. The historic Appalachian Theatre has entertained regional audiences in the heart of downtown Boone, NC since 1938. www.apptheatre.org