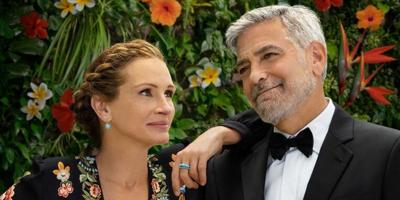 Ticket to Paradise marks the fifth screen teaming of George Clooney and Julia Roberts, and although their star wattage burns bright, this is a particularly flimsy, utterly predictable affair that does them no favors aside from granting a gorgeous filming location (Queensland, Australia — doubling for Bali).

David (Clooney) and Georgia Cotton (Roberts) were married for five years before parting with considerable acrimony. In the ensuing 20 years, they’ve competed for the affection of their daughter Lily (Kaitlyn Dever) while maintaining their ongoing animosity. One of the film’s biggest problems is that Clooney and Roberts’ insults and putdowns never feel genuine. It’s simply too obvious they like each other, and no points for guessing how it turns out.

A graduation trip to Bali sees Lily meeting Gede (Maxime Bouttier), a handsome, down-to-earth seaweed farmer who’s too good to be true. After a whirlwind courtship, they decide to marry, prompting David and Georgia to immediately fly to Bali in the hopes of preventing the nuptials, fearful that she’s making the same impetuous mistake to marry that they did.

After a crash course in Balinese culture, David and Georgia repeatedly attempt to sabotage the wedding when they’re not swimming with dolphins, playing beer pong, or trading increasingly lame barbs. The trajectory of the narrative holds no surprises — at all — and the screenplay by director Ol Parker and first-timer Daniel Pipski plays like second-tier Neil Simon, replete with soggy sentimentality. It’s almost remarkable how few laughs are generated. The story heaves with clichés, and nothing is ever really at stake. Ticket to Paradise is so laid-back it might as well be horizontal.

What is left is Clooney and Roberts (doubling as executive producers), coasting on good will and comfortable chemistry, because they’re not given much to work with here. Nor do Dever and Bouttier, who are attractive but bland. As Lily’s roommate, Billie Lourd plays the typical man-hungry, wise-cracking sidekick and appears perfectly game, but the film has no idea what to do with her, so she’s shuttled to the background like most of the film’s characters. No one rises above the rudimentary requirements of their roles.

In Ticket to Paradise, George Clooney and Julia Roberts got a nice trip, but the audience gets a pretty lousy movie.