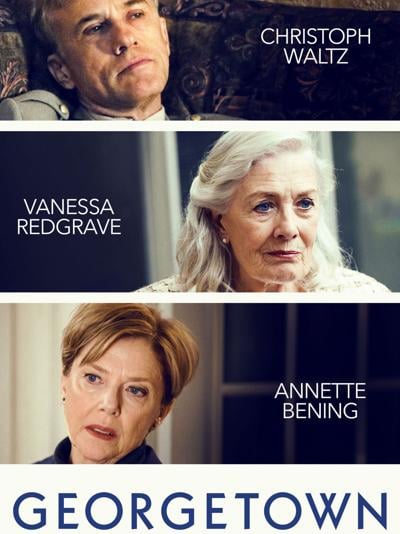 Christoph Waltz does not look like a man who can be trusted – at least onscreen.

Unquestionably he’s a fine actor, with a pair of Oscars for Best Supporting Actor, in Quentin Tarantino’s Inglourious Basterds (2009) and Django Unchained (2012), but like the late, much-lamented Alan Rickman, there always seems something crafty, shifty, even villainous, about him — even when he’s playing a good guy. He always seems to have a secret, nefarious agenda we’ve not privy to. This is, of course, a good part of his appeal. He’s the villain you love and love to hate.

Nowhere is that more evident than in Georgetown, a stylish thriller that showcases him at his most arrogant, duplicitous, preening – and irresistible. And if it’s considered typecasting, look no further than to the director of the film – a first-timer cheekily billed as “C. Waltz.”

The setting, as the title unmistakably indicates, is the tony Washington DC neighborhood, and the story – despite a very strange end-credit disclaimer – is essentially based on fact.

Waltz’s character, Ulrich Mott, is an unabashed and shameless social climber, which means he’s right at home in Georgetown. He sets his sights on Elsa Breht (Vanessa Redgrave), a wealthy and much-older society matron whom he woos and wins shortly after her husband dies, much to the dismay of her daughter Amanda (Annette Bening).

When he’s not name-dropping or claiming to have served in the French Foreign Legion and as a brigadier general in the Iraqi Special Forces – he even wears his uniform on occasion – he is systematically taking control of Elsa’s life, from acting as caretaker and chef to using her social and political connections to further his own career ambitions, whatever they may be.

The enterprising Mott establishes his own company, the Eminent Persons Group (EPG), in which he dutifully represents the rich and powerful at various social functions, further insinuating himself in the corridors of power.

Then, one fateful evening, Elsa dies in their Georgetown townhouse, and during the subsequent investigation, it quickly becomes evident that no one knows who the real Ulrich Mott is. When he is charged with her murder, he repeatedly attempts to thwart the efforts of the authorities – and even of his own legal team – to discern the truth from lies.

The narrative combines the mystery with some pointed political satire, not always successfully but often in an entertaining fashion. In addition to the wicked Waltz, who proves a more-than-competent director, there’s good work from Bening, who seethes with suspicion throughout, and Corey Hawkins as Mott’s attorney, who is consistently baffled by his client’s tall tales.

The real treat is Redgrave, enjoying the biggest, juiciest screen role she’s had in a long time. Alternately assertive and pitiable, her Elsa is initially flattered by Mott’s attentiveness and even comes to love him, but circumstances compel her to re-examine their relationship from a more objective and hardened standpoint, and the consequences prove dire. Redgrave and Waltz share some crackling confrontations here, with both actors in top form.

The ending notes that Ulrich Gero Mott is “not to be confused with Albrecht Gero Muth,” who is serving a 50-year prison sentence for murdering his much older, much wealthier wife Viola Drath in 2011. Yet the 2012 article “The Worst Marriage in Georgetown,” written by Franklin Foer for the New York Times Magazine, which detailed Muth’s crime — is specifically cited as the inspiration for Georgetown in the opening credits.

Then again, whether intentionally or not, the film feels like a puzzle in which the pieces don’t all fit or are missing altogether. It’s as elusive as its main character but offers some compensations along the way. Georgetown is well worth a look.

– Georgetown is available on-demand and on digital, and on DVD ($14.99 retail) from Paramount Home Entertainment.