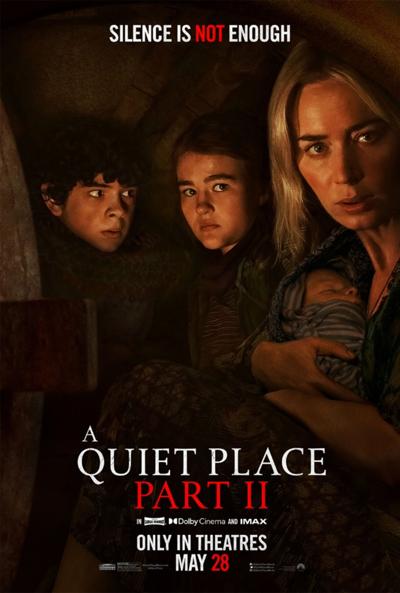 A Quiet Place (2018) was that rarity, a genre piece that was both a critical and financial success, as well as an impressive showcase for leading man/producer/director/screenwriter John Krasinski. The saga of an American family battling an alien invasion found a neat balance between characterization and special effects. As scary as it was, the characters were the principal focus – not the special effects.

A Quiet Place Part II, which sees Krasinski back at the helm, is also something of a rarity, a follow-up that retains and sustains the same level of quality as its predecessor. This is no mere retread but a smooth continuation, as worthy of praise as the first film.

The film opens with a flashback to the first day of the alien invasion, allowing Krasinski to briefly reprise his role as the heroic patriarch Lee Abbott. The narrative then shifts seamlessly to the conclusion of the first film, some 18 months later. Civilization has crumbled, or so it seems, but life does go on.

In an abandoned steel mill, the Abbotts unexpectedly encounter Emmett (Cillian Murphy), an old friend embittered by the loss of his wife and children. He has no faith in humanity or much sympathy for their plight. Indeed, he initially wants them to leave, not caring what happens to them – or himself, really.

The analogy to the COVID-19 landscape is obvious, but A Quiet Place Part II isn’t necessarily a message movie, although it does offer something of a tribute to family and community. It could be said that the storyline suggests John Steinbeck’s The Grapes of Wrath crossed with H.G. Wells’s The War of the Worlds. That may be a heady comparison but not an inaccurate one.

Once again, the heart of the film is the relationship between the characters. Evelyn, Regan, and Marcus must each tap their inner strength in order to survive, and it’s Regan – so wonderfully played again by Simmonds – whose resilience begins to sway Emmett, reigniting his own drive to survive and to care for others. Humanity may be in tatters, but it’s worth saving nonetheless.

As it befits its title and the nature of the aliens, the film is quiet in many places. There isn’t a great deal of dialogue. The actors are able to convey their emotions through gestures and movement. The action scenes, however, are anything but quiet – and Marco Beltrami’s pounding score follows suit.

Simmonds’s performance in the first film was one of the most remarkable performances by a child actor in a genre film since Haley Joel Osment in The Sixth Sense (1999), and she’s again the dominant force here. Jupe comes into his own as the fearful Marcus, attempting to adjust to now being the man of the family. Blunt and Murphy are also fine, and each – Blunt being British and Murphy Irish – nail their American accents.

In smaller roles, Djimon Hounsou brings compassion to the role of a sympathetic human and Scott McNairy just the opposite as a predatory thug singularly lacking in humanity. Neither is around for very long, but offer an interesting comparison of the good and bad in humankind when faced with seemingly insurmountable circumstances.

A Quiet Place Part II ends on rather an abrupt, “slam-bang” ending that’s par for the course in a sci-fi thriller. Given the film’s likely box-office success, another installment is hardly out of the question but were the franchise to end here, it would do so on a satisfying note.