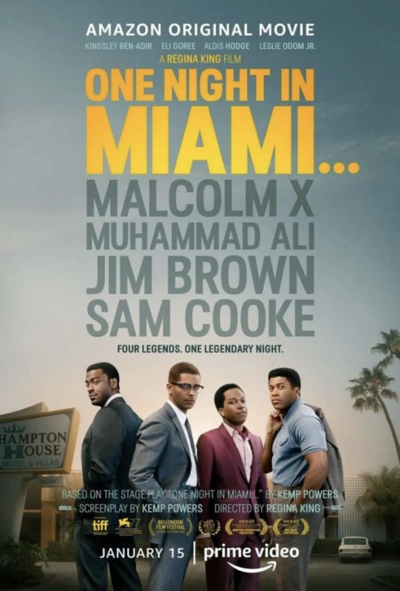 Malcolm X. Muhammad Ali. Jim Brown. Sam Cooke. These are the iconic figures portrayed in One Night in Miami, the screen version of executive producer Kemp Powers’s play, which he adapted himself. Calling the shots is Oscar-winner Regina King, who in her feature debut as director displays as much talent behind the camera as she has in front of it.

Each of the film’s principal characters was (and still is) a magnet for controversy, as reviled by some as revered by others – at a time and place in history not all that different from our own. The issues they debate and discuss are as timely now as they were 55 years ago. Indeed, that’s the whole point of One Night in Miami. It’s a reminder – albeit an unpretentious one – that we as a society haven’t come as far as we should or we’d like to think.

Nevertheless, this is first and foremost a piece of entertainment, and what’s particularly effective is that its points are woven into the fabric of the narrative. They don’t dominate. They don’t overwhelm. They’re not preached. The story and the characters come first; their message follows, and in ingratiating, unforced fashion. One Night in Miami is undoubtedly a drama, but it’s got heart and also humor. It presents its larger-than-life protagonists in human terms, which makes it easier for an audience to identify with them.

The film mostly takes place on one evening in February 1964, following Cassius Clay’s triumph over Sonny Liston to become heavyweight champion of the world. It is at Miami’s Hampton House Motel that Malcolm has invited the newly-crowned champion, football star Brown, and singing sensation Cooke. They’re expecting a party, but that’s not quite what Malcolm has in mind.

One Night in Miami isn’t so much historical speculation as historical fiction. What transpires on screen did not necessarily occur in real life, but it’s not out of the realm of possibility – if not probability – that it could have happened.

Like many actors-turned-directors, King allows her cast plenty of room to maneuver, which lends cohesion and credibility to the characters’ on-screen relationship. There are no star turns here. This is a very comfortable and compelling ensemble, with each actor enjoying his turn in the spotlight.

Muhammad Ali has always been a tough role to tackle, given Ali’s own personality, which was undeniably vivid, even unforgettable. Despite an Oscar nomination, Will Smith didn’t quite pull it off in Ali (2001). Nor, for that matter, did Ali himself in The Greatest, the 1977 bio-pic that couldn’t overcome an episodic, cliché-riddled script. But Eli Goree, having only to play the champ at one particular point in time, nicely conveys Clay’s youthful, brash energy and also his serious side, as in his conversion to Islam.

As Sam Cooke, Leslie Odom Jr. brings impish humor and an inner fire that occasionally erupts – usually when taken to task by Malcolm. If Cooke seems the odd man out in this quartet, it’s because he wasn’t a particularly political performer, and also because he was killed in December 1964, just as the Civil Rights movement was truly gaining momentum.

Kingsley Ben-Adir, recently seen as Barack Obama in the Showtime mini-series The Comey Role, conveys the inner struggle between humility and pride that simmers within Malcolm in a thoughtful, pensive turn that ranks very favorably alongside Denzel Washington’s Oscar-nominated performance in Malcolm X (1992). “The journey is different for each of us,” he tells Clay early on, likely unaware just how that sentiment will apply to him – and to each of them.

Ben-Adir’s Malcolm is completely aware that he’s putting his life in jeopardy when he decides to break with Elijah Muhammad, and the safety of his family and his own mortality are foremost in his thoughts. (History would, unfortunately, bear him out.)

Aldis Hodge doesn’t necessarily resemble Jim Brown, but the wary glint in his eye and the coiled temper are impossible to overlook. In a film filled with good performances, Hodge’s may be the most persuasive, and in some ways his character is the most practical, even pragmatic. Everyone’s very good, but Hodge just a bit better.

There’s good supporting work by Lance Reddick as Malcolm’s stalwart, stone-faced bodyguard Kareem X and Christian Magby as the more easy-going bodyguard Jamaal, whose gleeful enthusiasm when meeting his heroes Clay, Brown, and Cooke is both funny and touching.

The film is not without its faults, particularly a wrap-up that feels slightly rushed, but One Night in Miami is a stylish, good-looking film with fine performances and something very relevant to say. It’s a worthy endeavor on a number of levels, not the least of which being the chance to “spend time” with some fascinating figures in American history whose legacies endure.