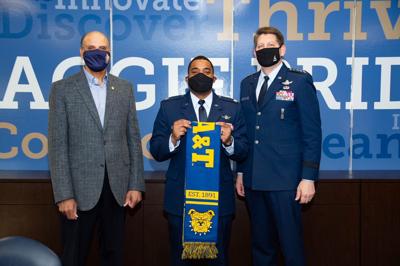 EAST GREENSBORO, N.C. (Oct. 16, 2020) – North Carolina Agricultural and Technical State University is being considered as the first of five universities in a consortium to be established by the U.S. Space Force.

A&T is the first university the Space Force has visited in its effort to establish the consortium, thanks to Maj. Romeo White ’08, who also participated in discussions about the issues of racial justice and equality.

“He spoke up and said, ‘Let me tell you about my alma mater,’” said Gen. David D. Thompson, vice chief of space operations.

Space Force leaders likely would have found their way to A&T eventually, but White’s testimony coupled with readily available information about the university made it easy to consider the nation’s largest public historically Black college or university for the consortium, Thompson said.

Martin provided an overview of A&T’s history as a land-grant institution under the Second Morrill Act of 1890 and its accomplishments as a result of strategic planning. A&T remains the No. 1 producer of African Americans undergraduates in agriculture and engineering and of master’s graduates in mathematics and statistics. Today, as a doctoral research intensive institution, 45 percent of the student population at A&T is in a STEM degree program.

In fiscal year 2020, A&T received $61 million in research funding, secured six new patents, established four new research centers of excellence and established partnerships with RTI India, Verizon, IBM, Cree and the National Security Agency, among others. The results of an analysis released in August show A&T has a nearly a $1.5 billion economic impact across the state.

The Space Force is creating the university consortium to help meet the responsibilities of the newly-established branch of the U.S. military, which monitors the 26,000 objects circling the globe right now.

It must fulfill the needs of a technology-focused, 21st century digital service, Thompson said. To do so, it is charged with recruiting and educating a competent, diverse and inclusive workforce, in addition to pursuing a relevant, state-of-the-art research and technology department.

The Space Force also must leverage and support the nation’s research universities, as well as provide motivation and opportunities for the universities’ students to pursue science and technology degrees.

It seeks to create a consortium of select universities in world-class research and leadership, identify and pursue research areas of mutual interest with those consortium members individually and collectively. The Space Force also intends to establish scholarship, internship and mentorship opportunities for students and ROTC cadets, in addition to continuing education and leadership development opportunities for its officers.

Following a tour of the A&T campus and the Joint School of School of Nanoscience and Nanoengineering (JSNN), Thompson participated in a forum with members of ROTC Detachment 605, where he detailed the purpose and goals of the Space Force. Cadets asked Thompson questions about how to join the Space Force and what career opportunities are available and sought his advice and insight based on his 35-year career in the Air Force before he was transferred to the Space Force on Oct. 4.

If chosen as a member of the consortium, A&T will be able provide expanded research opportunities for students and faculty, particularly in the College of Engineering, College of Science and Technology, the Center of Excellence in Cybersecurity Research, Education and Outreach, and JSNN. It also will create a pipeline for students to pursue aerospace careers upon graduating with STEM-related degrees, said Stephanie Luster-Teasley, Ph.D., interim vice provost for undergraduate education.

As university visits have just begun, a timetable for announcing the Space Force consortium members is not yet available.

North Carolina Agricultural and Technical State University is the nation’s largest historically Black university, ranked number one among public HBCUs by U.S. News & World Report. It is a land-grant, doctoral high-research classified university by the Carnegie Foundation and constituent member of the University of North Carolina system. A&T is known for its leadership in producing graduates in engineering, agriculture and other STEM fields. The university was founded in 1891 and is located in Greensboro, North Carolina.