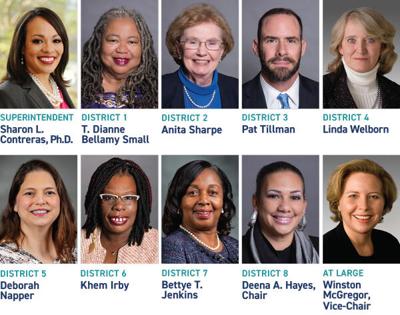 A proposed policy on technology use by the Guilford County Board of Education may require its members to explicitly state their social media posts reflect only their personal views and not those of the board.

Proposed policy code 2127 is titled Board Member Technology Use. An April 13 media release states that the policy “directs Board members to use district technology in a manner that is ethical, respectful and supportive of the Board’s duty to provide students with the opportunity to receive a sound, basic education.” In subsection 3a of Section C of the policy code, titled Board Member Use of Personal Social Media, the policy states:

This is one of five proposed policies the Board released for a 30-day public comment period before voting on whether or not to approve them. The other four are described in the following summaries:

2340 – Parliamentary Procedures – This policy notes which parliamentary procedures the Board will use for its meetings. The “Suggested Rules of Procedure for Small Local Government Board, 2nd ed.,” will be used.

2341 -- Quorum – “Policy 2341 – Quorum” defines what a quorum is and how it affects the ability of the Board to conduct a meeting. The policy says a quorum is defined as a majority of the members of the Board. It also says if a quorum is not present, the meeting cannot move forward.

2342 – Voting Methods – This policy dictates how voting will be handled and what counts as a vote. It also declares that no secret ballots are permitted. All votes and who cast them will be shown in the meeting minutes.

She complained of the other Board members using Zoom’s chat function to send her links during virtual meetings and questioned if those chat messages were public information, to which Chairperson Deena Hayes-Green replied that they were.

Sharpe stated, “I am unable to raise my hand,” meaning the Zoom “Raise Your Hand’ command was not working for her, and that the links other members were allegedly sending her in Zoom chat were “irritating” because they distracted her when she was trying to get the Chair’s attention.

No one has acknowledged that the policy was drafted in response to a controversial January Facebook post by District 2 representative Anita Sharpe. However, it appears aimed at curbing the kind of social media activity that inspired Sharpe’s critics to call for her resignation.

On January 10, Sharpe publicly shared a video by retired U.S. Airforce Lieutenant General Thomas McInerney, in which McInerney falsely claimed that US Special Forces had infiltrated the “Antifa” mob storming the Capitol and seized Nancy Pelosi’s laptop. McInerney alleged that the laptop contained potentially damaging information about Pelosi, which was why the House speaker was pushing for the president’s impeachment.

Sharpe’s post, which Facebook removed for containing false information, caused an uproar in the county and for many to call for her resignation or removal.

When asked about her unapologetic sharing of the video, Sharpe responded to YES! Weekly: “I am not a fact-checker.”

Last week, this writer asked Sharpe about one of her old Facebook posts in a new comment under that post. On Feb. 11, Sharpe shared a meme that stated [sic] “LET’S STOP CALLING ‘FACT-CHECKED’ BY ITS REAL NAME. CENSORSHIP.” I commented: “Do you believe that school board members have an obligation to determine the veracity of claims before they share them, particularly if those claims are alarming, hyperbolic, or conspiratorial?” As of Monday, Sharpe had not responded.

On March 14, Sharpe created a Facebook fundraiser for The Pregnancy Network, located on Fulton Street in Greensboro, which describes itself as “a 501(c)(3) nonprofit, Christian organization.” According to Greensboro City Council Members Tammi Thurm and Michelle Kennedy, staff and volunteers from the Pregnancy Network have parked the organization’s ultrasound van outside of A Woman’s Choice of Greensboro and take part in anti-abortion demonstrations there. Thurm and Kennedy have also described demonstrators obstructing patient cars and “bullying” women seeking the clinic’s services.

Last Wednesday, I sent Sharpe a question via Facebook Messenger, the medium she has used to respond to YES! Weekly in the past. The message asked, “If the proposed technology use policy passes, will you add a disclaimer to your fundraiser for the Pregnancy Network that this is only a statement of your belief and does not reflect the position of the board?” Facebook has marked the message as having been read by Sharpe, but she has not responded.

YES! Weekly has also asked school board Chair Deena Hayes-Greene and Attorney Jill Wilson if the proposed policy would apply to posts such as Sharpe’s, whether the member was holding a fundraiser for a controversial organization or sharing inflammatory or contra-factual statements from a third party. As of press time, neither had responded.