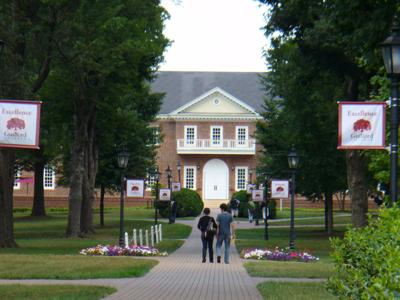 Guilford College faculty have no confidence in interim president Carol Moore and the 183-year-old private liberal arts college’s Board of Trustees.

That was the declaration of a Zoom meeting held on Friday, Nov. 11, in which 94% of the 70 attending faculty members voted “no confidence” in Moore, and 93% voted they have none in trustee leadership (Zoom’s onscreen statistics only show percentages, not the number of votes).

Following Quaker tradition, Guilford’s faculty uses a decision-making model to conduct its business. The American Friends Historic Committee defines Quaker decision-making as a process in which, “Friends do not simply vote to determine the majority view, but rather they seek unity about the wisest course of action.”

This was the first time in the institution’s nearly 200-year history that faculty have taken such a vote on its leadership. According to a Friday media release from the faculty members who organized the meeting:

The vote of ‘No confidence’ reflects a deep dissatisfaction with the interim president, who was hired in August by the Board of Trustees without a traditional national higher education search process…It also reflects a deep distrust of the Board’s leadership, and their ability to govern the college.

The meeting at which the votes were recorded was held in response to letters of intent sent out by administration on Nov. 6, which announced that 20 full-time faculty members would be terminated and half of the current majors offered on campus would be eliminated.

The list of positions to be terminated included those of 15 tenured faculty (including some who held endowed professorships and others who had won teaching awards), one tenure-track faculty member currently in the middle of a tenure review, and four long-term Visiting Assistant Professors who had each been teaching full-time on campus for over a decade.

Among the “questions that deserve answers” listed on the press kit from the Nov. 11 meeting is:

How can you uphold executive contracts for administrators making over $100,000 each and simultaneously fire 20% of your tenured faculty—at a campus that prides itself on social justice and integrity?

As of noon on Tuesday, Interim President Moore had not responded to either YES! Weekly’s request for comment, or our inquiry about her current salary. The only public record of what Guilford College administrators earn is the institution’s Form 990 for 2017. It lists then-president Jane Fernandez, who resigned in July of this year, as earning a salary of $284,983 with an additional $39,404 “in compensation from the organization and other organizations.”

The highest-paid administrator on the 2017 form who is still employed by the college is Vice President for Administration and Finance Len Sippel, with a salary of $191,53 and additional compensation of $11,458. President Moore is the head of the President’s Cabinet, which the college’s website states is responsible “for the strategic oversight and management of the College and its respective divisional units.”

“I expect [past President] Fernandes’ parachute is similar,” said a faculty member who asked not to be named but whose job at Guilford ends with the Spring 2021 semester. “I don’t want to give them cause to fire me before then. I realize that these salaries aren’t unusual for academic administrators, and some might even call them low, although that word sticks in the throats of those of us who were making far less before we were fired. ‘Gutted’ describes both how I and my colleagues feel, and what the Trustees and interim president will have done to the college by this time next year.”

How did a 183-year-old institution, built by Quakers on land that was a part of the underground railroad, get betrayed by its own Board of Trustees?

How did a 183-year-old institution, built by Quakers on land that was a part of the underground railroad, betray its own community and core values?

Why is the interim president hired by the Board of Trustees saying we can’t “afford to be a liberal arts or Quaker college” after only being on campus for 60 days?

Why does a Quaker-founded school with “integrity” in its core values pressure terminated employees, even alumni ones, to sign non-disclosure and non-association agreements in order to get any severance?

The Nov. 6 “Update Message from President Carol Moore” post on the on Guilford College’s website includes the following paragraph:

Change can cause anxious moments, but it is also a time of opportunity. Over the next weeks and months, we will be turning our attention to developing the College’s future path. Indeed, the Futures Task Force has already begun that work, and we look forward to sharing information with you as it develops.

While much of this change is exciting, the discontinuation of some majors will result in the loss of some of the College’s faculty members at the end of this academic year.

Several faculty members who spoke to YES! Weekly on condition of anonymity said that they understand the college is facing major financial issues, but that they don’t understand why it won’t follow its own stated policies for dealing with such a crisis, which include declaring financial exigency and following that procedure for making cuts.

They also accused the Trustees of breaking tenure contracts while “protecting the Vice Presidents who got us into this mess.” Every single one interviewed expressed anger at Moore’s use of the word “exciting.”

One professor who gave a statement for the record is Geology professor Dr. Dave Dobson. Dobson is also a game designer and writer, who invented Snood and is the author of three fantasy novels.

Guilford has been a really special place for me for going on 24 years. I have loved the students, my colleagues, the community, and the commitment to values, both Quaker and human. I know that running a small liberal arts college with a big heart, particularly one that doesn’t cater to wealthy students, is a challenge. That said, we are where we are because of poor leadership and really bad financial decisions in recent years, not because of anything the faculty or staff or students did wrong. The cutting process they’re going through now makes a mockery of our contracts, shows a disregard for standards in higher education, and is constantly accompanied by false statements, the invocation of counterfactual data that is never cited or provided, and endless posturing and cruelty. If I need to leave this place that I’ve loved and supported, I wish it were happening with the integrity and community that I have so valued. Instead, I and others are being discarded through a shamefully fake process by a hired gun who showed up a few months ago. Guilford won’t find new hope and new life this way. It should be trying to rally its friends and family and work with them to build a future, not lying to them and alienating them and then callously tossing aside those who’ve given the best of their labor, their time, and their love, and who had to meet strict standards over multiple reviews to earn their tenure. I know that the faculty who remain are great educators, hard workers, and care deeply about students. I hope they are able to do the work at which they have excelled for many years to come. It seems that will have to happen despite the current leadership, not because of it.