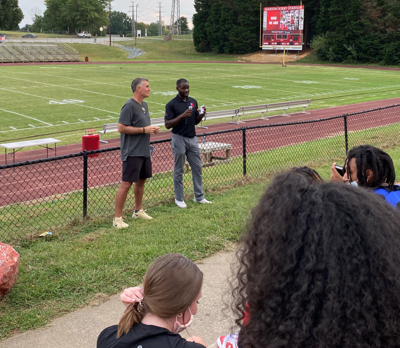 Greensboro, N.C. – September 16, 2021 – Get In the Game’s (GITG) Tom Walter, joined by Walter Hines Page High School principal, Erik Naglee and GITG Director of Community Relations Kevin Jordan, announced yesterday that GITG is launching its programming to all Page Pirate student-athletes this year and plans to expand to more students in the 2022 academic year and beyond.

ABOVE PHOTO - Tom Walter and Kevin Jordan addressing a group of Page student-athletes at a GITG kickoff event on Sept. 15.

“We are excited to be partnering with Page High School as we take another next step toward Get In the Game’s goal of equipping students with the information, technology, resources, and opportunities to better understand themselves and others. Growing our footprint in Greensboro and across the Triad is the latest example of resounding success we experienced in the 2020 academic year and a glimpse of what is yet to come,” said GITG founder Tom Walter. “We are grateful to Principal Naglee, Athletic Director Matt Harder, and the dozens of Page coaches and administrators who will play an integral role in our program for their support and commitment to the personal development and empowerment of their students.”

“We are thrilled to be implementing the Get In the Game programming this fall,” explained Naglee. “Today’s students are socially active and engaged and are frustrated by the level of divisiveness in the world. The GITG program will help them harness their passion and commitment and leverage it to address issues of inequity in our community.”

Wake Forest University head baseball coach Tom Walter, in collaboration with his former player Kevin Jordan, founded GITG in the summer of 2020 amidst the nationwide outcry for racial justice and equity. The two men share a unique bond that served as a platform to use their story to inspire change.

In 2010, Walter learned that his freshman player, Kevin Jordan, was suffering from Anti-Neutrophil Cytoplasmic Autoantibody (ANCA) vasculitis and would need a new kidney to survive. Upon hearing that none of Jordan’s family members were suitable donors, Walter immediately got tested and turned out to be a match. In February of 2011, Walter, a white man, donated his kidney to Jordan, a young Black man, saving Jordan’s life and inspiring a nation to see beyond the color of a person’s skin. At the time, Walter and Jordan spread the message that, regardless of skin color, “our blood is the same.”

Nearly a decade later, the two men recognized that the world needed to hear their message of shared blood more than ever. They decided to build on their story of togetherness and create Get In the Game. In its inaugural season, GITG launched programs for middle and high school students in North Carolina and Washington, D.C. and recently expanded into Cleveland, OH. Facilitated by trained educators, students known as GameChangers participate in a three-season curriculum designed to help them learn about themselves, what they stand for, and ways to drive intentional change and reframe equity in their schools and local communities. After completing the program, GameChangers’ “off-ramp” to continue this engagement on Equity Avenue, an online community and app which provides resources to help them further their commitment to equity, serving others, and creating change.

GITG is also in discussions with additional schools across the Triad and is making plans for further expansion in Fall 2022. Educators and administrators interested in implementing GITG programming are encouraged to visit getinthegame.org and submit an interest form.

Get In the Game, Stuart Scott ENSPIRE Award:

In July of 2021, Walter, Jordan and Get In the Game were recognized at ESPN’s Sports Humanitarian of the Year Awards with the Stuart Scott ENSPIRE Award. The Sports Humanitarian of the Year Awards honor leagues, teams and individuals within the sports world who positively impact their community. The Stuart Scott ENSPIRE Award, created in honor of former ESPN anchor Stuart Scott who battled cancer until his passing in 2015, celebrates someone who has taken risks and used an innovative approach toward helping the disadvantaged.