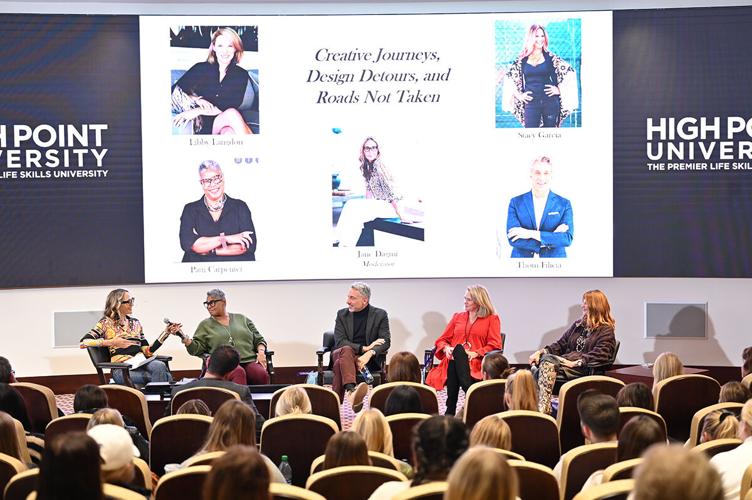 A panel of celebrity designers shared their creative journeys with High Point University design and merchandising students who filled the Callicutt Auditorium on Oct. 20. Pictured are moderator Jane Dagmi, left, passing a microphone to designer Patti Carpenter, as designer panelists Thom Filicia, Libby Langdon and Stacy Garcia await their turns to speak during the event on High Point University’s campus. 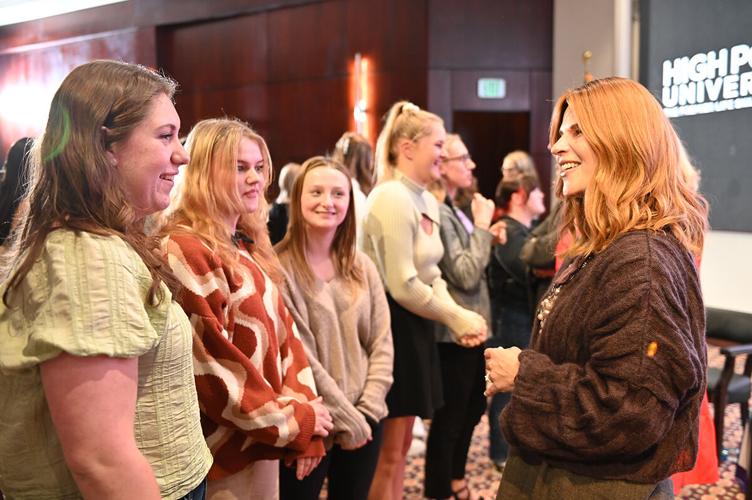 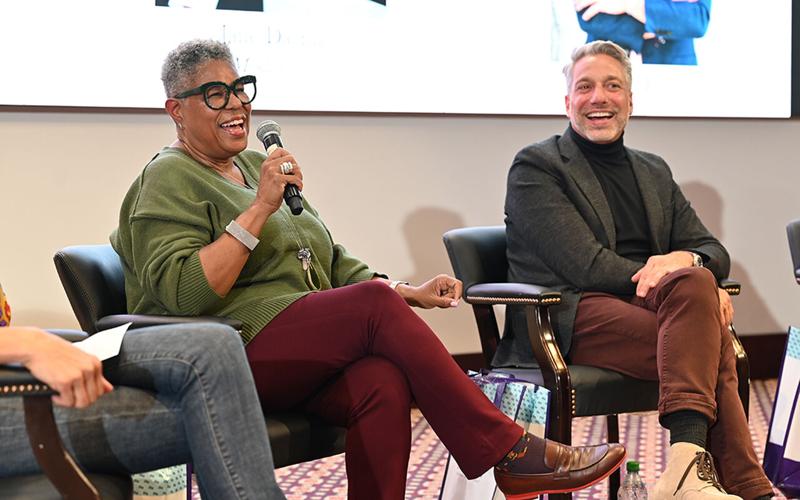 Patti Carpenter, left, laughs along with Thom Filicia and audience members as they share a humorous adventure in their design journey. 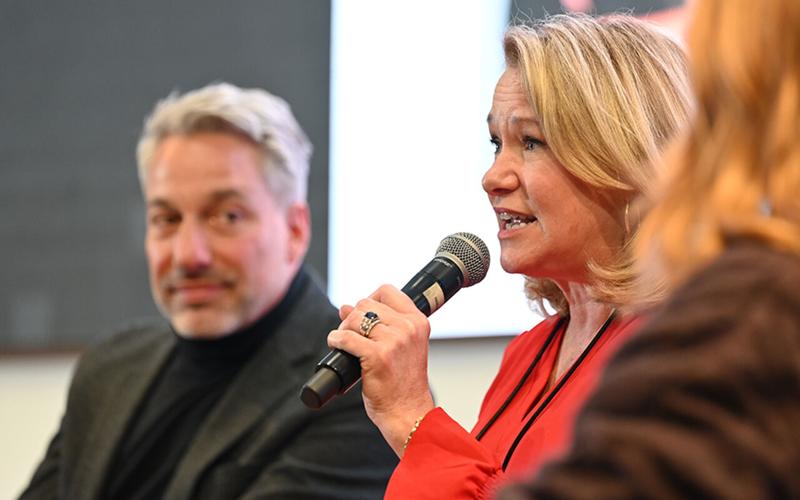 The event attracted students and emerging designers, as well as anyone in a creative industry.

“Connecting our students face-to-face with celebrated industry professionals is one of the differentiators of our design and merchandising programs,” said Jane Nichols, chair and associate professor of home furnishings and interior design. “Students meet and mingle with interior and home fashion product designers they have seen in magazines and on television, and they get direct career advice from professionals at the top of their fields.”

Before the panel, Nichols said her goal was to demonstrate to students that their careers will not be smooth linear paths but rather often bumpy roads with twists and turns that result in unexpected opportunities and rewards. Each of the designers echoed that theme as they described their experiences and detailed how they achieved success in their career.

“The design panel provided valuable insight into the normality of twists and turns one’s path might take, especially within the design industry,” said Hayley Bracci, a junior interior design major from Stow, Massachusetts. “Knowing that this is normal and can provide even more valuable opportunities is comforting to a young professional like me, who is unsure where their career might lead.”

“The professional designers on the panel were very insightful about how they began their journey into interior design, each having their own unique path,” said Botwinick. “They were also very encouraging about how that path is not always in the upward direction as one may think, but even so to never give up on your ambitions.”

Growing up in High Point with her mother working as a designer and her father working in textiles, Langdon said she initially wanted to be a fashion designer. That path changed after she accepted a role as a makeover television personality. The tearful elation of her first makeover client directed her toward a career as an interior and product designer, author and the creative force behind New York City-based design firm, Libby Interiors, Inc.

“Definitely my mentor in interior design was my mom,” said Langdon, who noted her mother in the audience. “She taught me to listen to what people want. She helped guide me to work with people, and that’s part of my success now.”

“It’s never a straight line in a creative field,” said Carpenter. “And change is the only constant.”

Filicia, founder and principal of New York City-based Thom Filicia, Inc., expanded recognition of the design world when he was cast as the interior design expert in the Emmy-Award winning hit show, “Queer Eye for the Straight Guy,” which led to numerous TV appearances and hosting shows for the Style Network, HGTV and a current design show with Carson Kressley on Bravo called “Get a Room with Carson & Thom.”

“It twists and turns even when you’re doing what you think you’re supposed to be doing,” Filicia said. “Working in television was something that totally changed my path. Back in the early days of television design, it was not the most powerful thing to have on your resume. You had to dance a little longer and sing a little louder to get jobs on Park Avenue as an interior designer. Sometimes your biggest challenge is also the thing that pushes you forward and gives you that strength. That big curveball is what really pushed me forward.”

Garcia, who started her career in surface pattern design, advised students to give themselves permission to try different things. Garcia is the founder of textile supplier LebaTex, Inc.; creator of Stacy Garcia, Inc., a licensing and design company that produces fashion and interior products, and publisher of “Life-Styled by Stacy Garcia,” a digital design publication that covers the intersection between design, fashion, travel and entertaining.

“Life is never linear, whether you’re a creative or not,” said Garcia. “We’re all the hero of our own story. You have to surround yourself with people who believe in you.