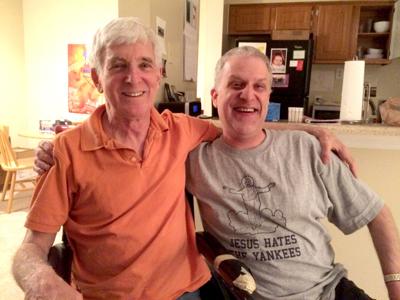 The lovely and talented Mary-Louise Parker, a 1986 graduate of the University of North Carolina (UNCSA) School of Drama, won her second Tony Award as Best Actress for her performance in The Sound Inside at the 74th annual Tony Awards last month.

Parker earlier won a Best Actress Tony for Proof in 2001, and her long list of accolades and awards includes an Emmy and Golden Globe award for the HBO production of Angels in America (2004) and another Golden Globe in 2007 for the long-running Showtime series Weeds.

On a less triumphant note, the UNCSA School of Filmmaking reported last week that former faculty member Ronald Roose (1945-2021) had passed away in New York City after a long battle with Parkinson’s Disease.

“With heavy hearts, we announce the passing of Ron Roose on September 15th,” the statement read. “He died peacefully at home surrounded by his family, after having lived with Parkinson’s for 15 years. He was beloved by our students and those of us who knew him, worked with him, and called him friend. He had an indomitable spirit, a mischievous sense of humor, a kind heart, and a passion for teaching. He will be sorely missed.”

During my 20-plus years in North Carolina, I’ve gotten to know a great many of the UNCSA faculty members. I consider Dale Pollock and Richard Clabaugh among my best buds, I’m very friendly with Julian Semilian and Michael R. Miller, and I also considered Ron a very good friend.

We’d only met in passing before Pollock held a small Super Bowl party. The teams playing were the New England Patriots and the New York Giants. As a Philadelphia Eagles fan, the only satisfactory resolution to the game would have been if a sinkhole suddenly opened up and swallowed both teams.

Ron and I got to talking, and I quickly realized that he would be the perfect subject for a YES! Weekly cover story. Titled “Cutting Class: The Wit and Wisdom of Ronald Roose,” he discussed his work, his battle with Parkinson’s Disease, his love of sports, and the circumstances by which he came to teach at the School of Filmmaking.

It was the cruelest kind of irony, but it came with a silver lining. Having been diagnosed and gone through a divorce, his potential nest egg was decimated thanks to the insidious chicanery of one Bernard Madoff. Ron almost never spoke disparagingly of anyone, but his eyes would go cold when the subject of Madoff came up, and who could blame him?

The story, which ran in 2011, remains a personal favorite — even if the editor at that time misspelled Ron’s last name as “Rosse” (on the cover, no less!). This prompted gruff e-mails from me and from Ron’s friend, noted author and filmmaker Nicholas Meyer, but Ron just laughed it off. That’s the kind of guy he was. Even Ron’s sister Gina e-mailed me how thrilled she was with the piece.

Afterward, Ron and I would get together for dinner periodically on weekends. We’d talk movies, of course, and sports — and he’d never let me forget how many championships New York had as opposed to Philadelphia. He hadn’t expected to have a “third act” as a teacher, but he fell in love with it and took great pride in his students and, indeed, UNCSA as a whole. He loved the school, and the school loved him right back.

It was due to Ron that I had the privilege of corresponding with Nicholas Meyer, whose work I’ve admired for years. They were best friends literally since birth, born an hour apart on Dec. 24, 1945. One of their collaborations, the Cold War spy thriller Company Business, starred my favorite actor, Gene Hackman, and it could legitimately be said that I regard Company Business with more affection and fondness than the people who actually made it!

That said, it was due to that film that Ron was able to cross into East Berlin shortly after the Berlin Wall came down, which he described as an unbelievable feeling. While editing the film in London, his wife gave birth to their daughter Emma, so Ron’s memories of the film weren’t all bad.

I didn’t see Ron after that, but occasionally we’d talk on the phone. Then, unfortunately, there came a point where he couldn’t. I would leave a message saying I was thinking of him and hoping he was taking care of himself. As saddened as I am by his passing, part of me is glad that he’s out of pain.

Meyer e-mailed a heartfelt statement to UNCSA last week, noting: “In the end, the only thing (Parkinson’s Disease) couldn’t destroy was his heart. What does that tell you? And now, mercifully, he is gone. For the first time in my life, I am in the world without him. I have no idea how this works. I seem to be staring into an abyss.”

I will miss Ron Roose, but when I think about him, I’ll smile, and so will a lot of people. Those who knew him were blessed. If I brought a little light into his life, he most certainly brought some into mine. He never lost his sense of humor, and he never wallowed in self-pity. “Self-pity is a waste of time,” he said, “and I don’t have the time to waste. None of us does, really.” Here, here.

The Roose family has asked that, in lieu of flowers, donations be made to the UNCSA School of Filmmaking at www.uncsa.edu/giving, to be made available to students in need. Under “tribute” information, people can select “in memory of” and type in “Ron Roose.” If you would like the family to receive a letter acknowledging your gift, simply enter the following address: Gina Roose, 70 Riverside Drive Apt. #4-C, New York, N.Y. 10024.”