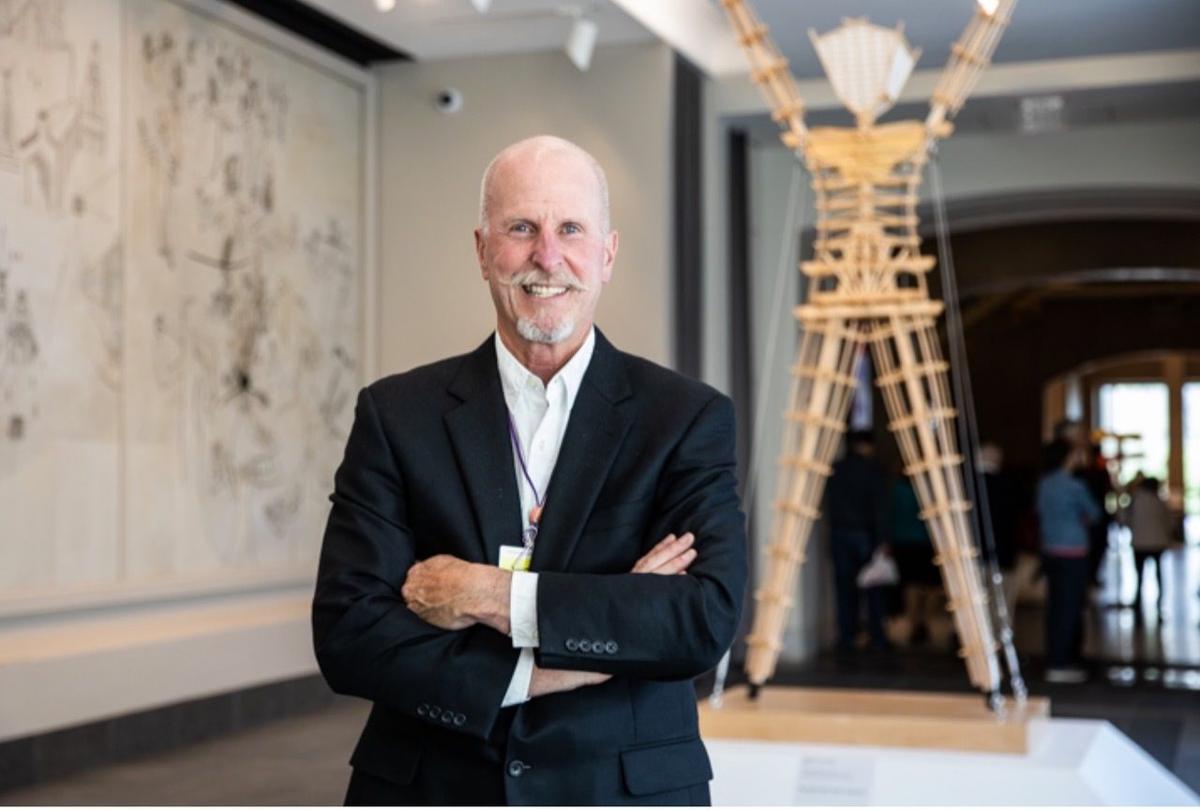 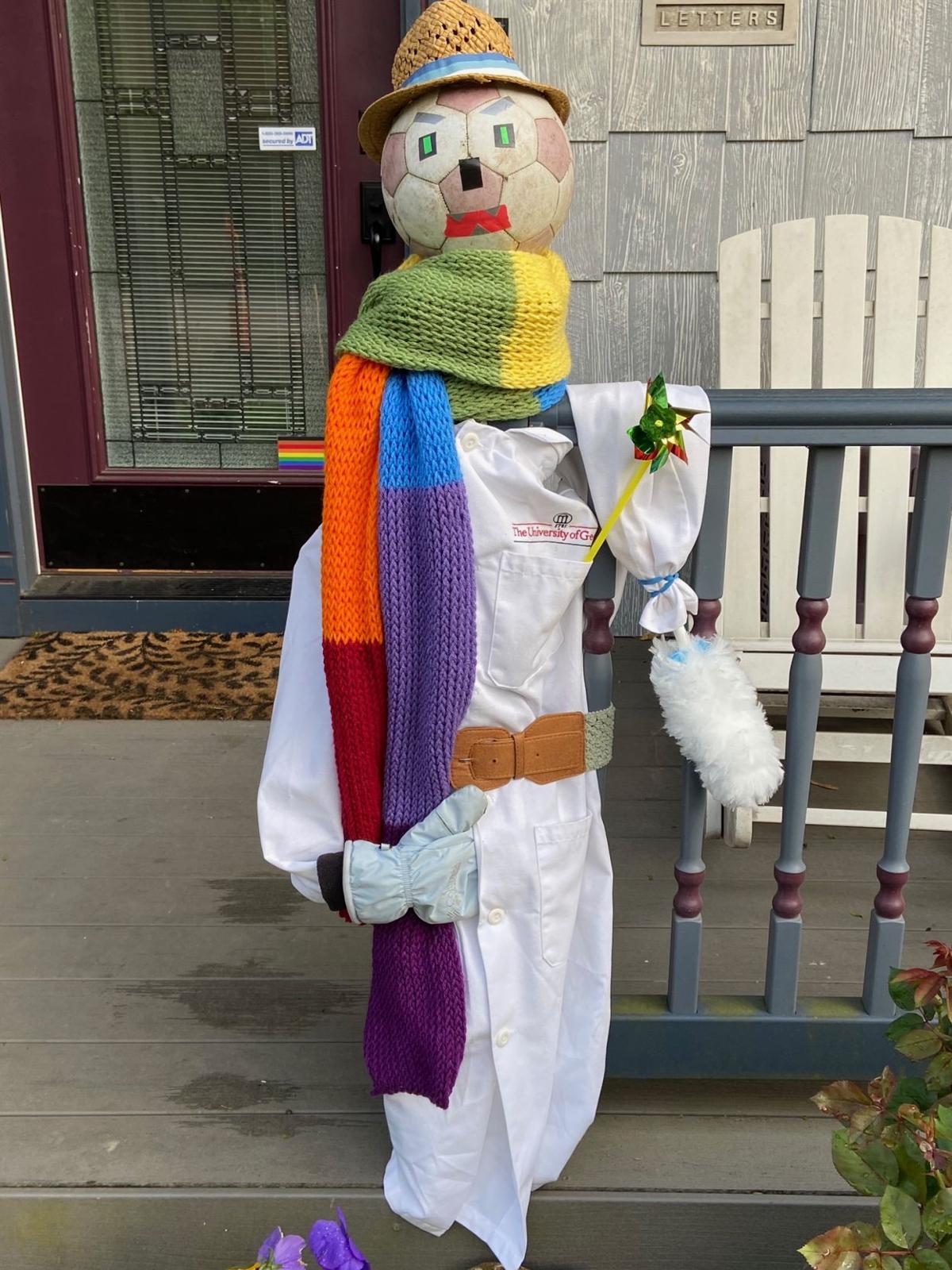 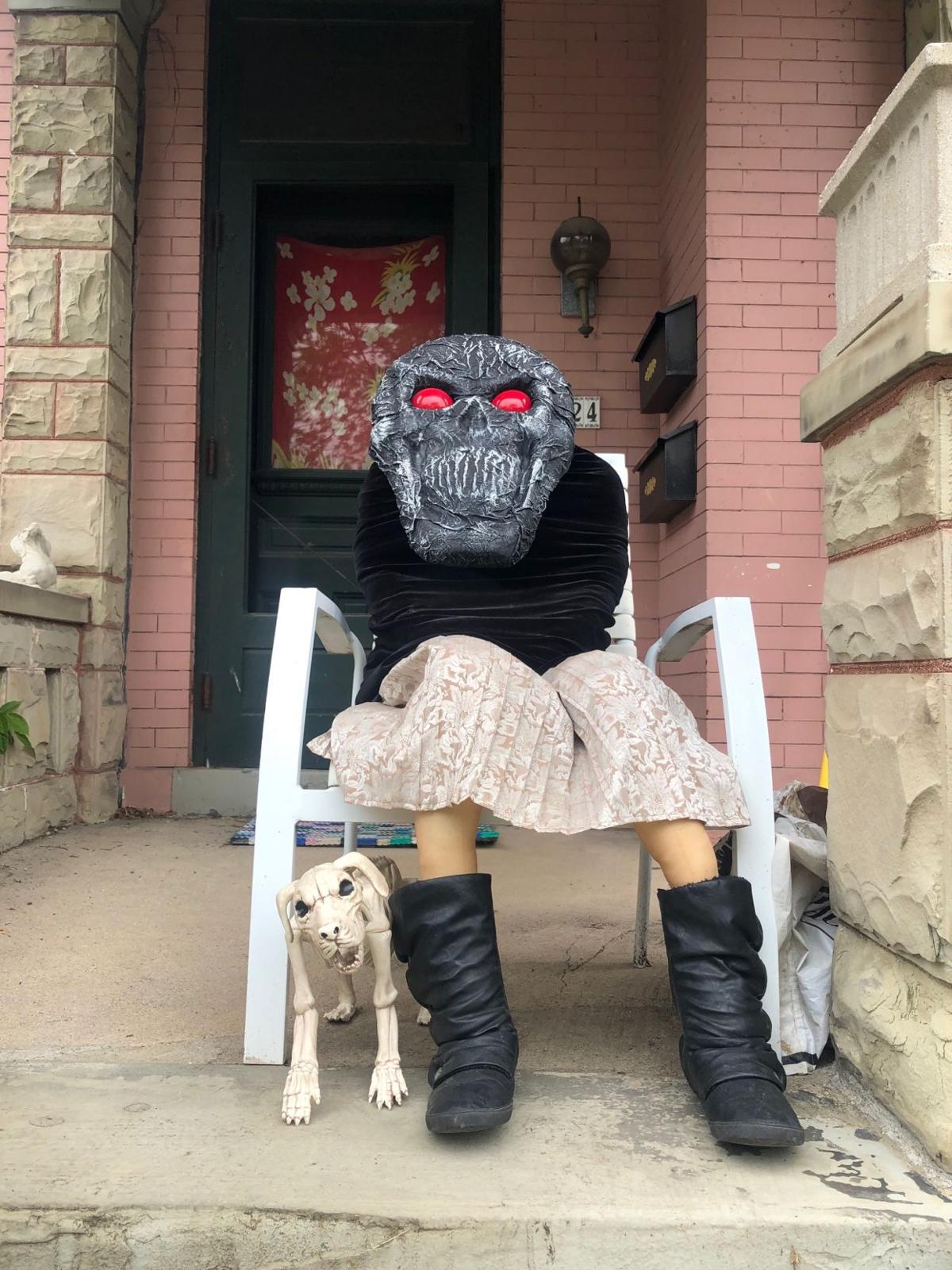 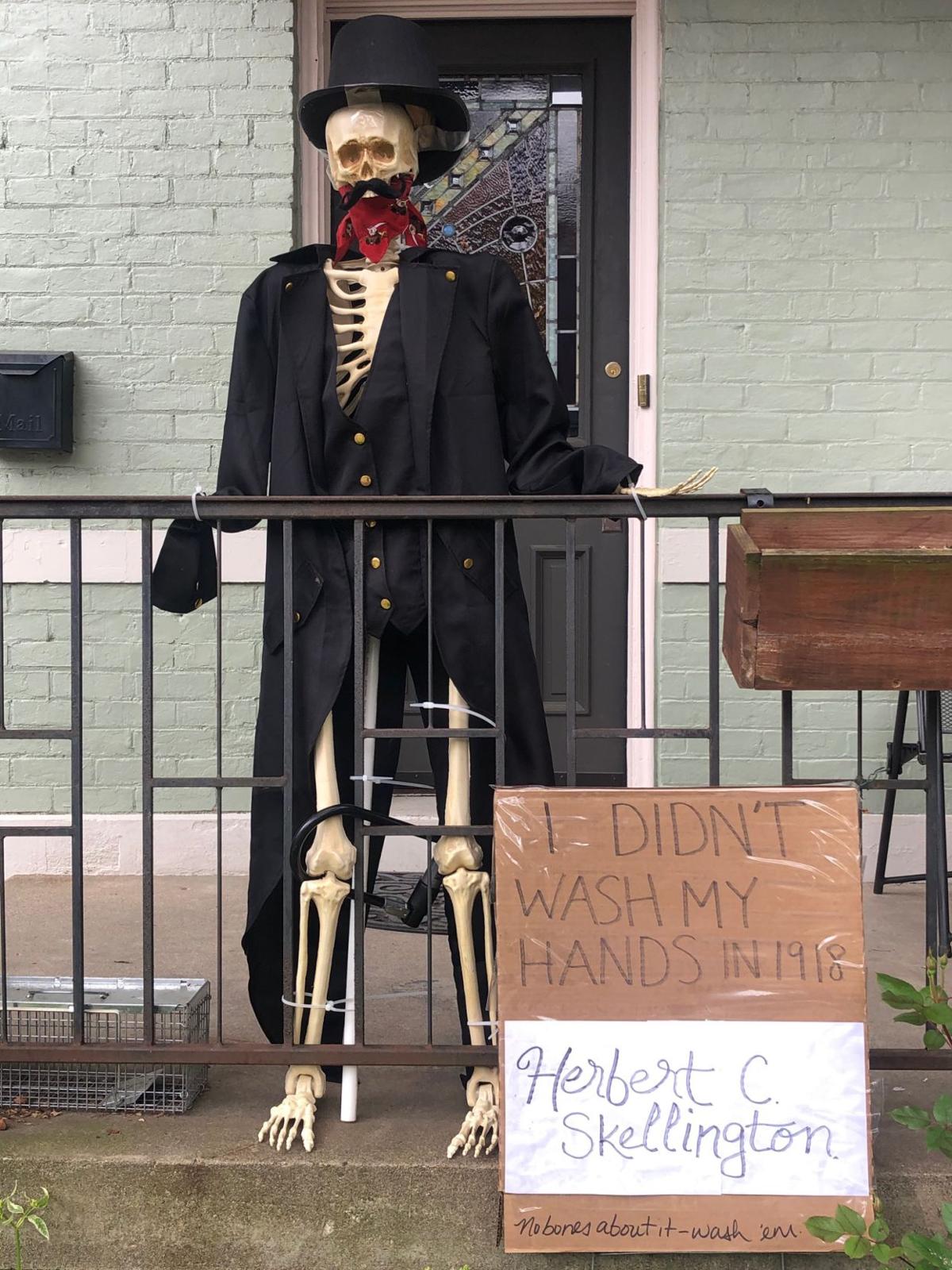 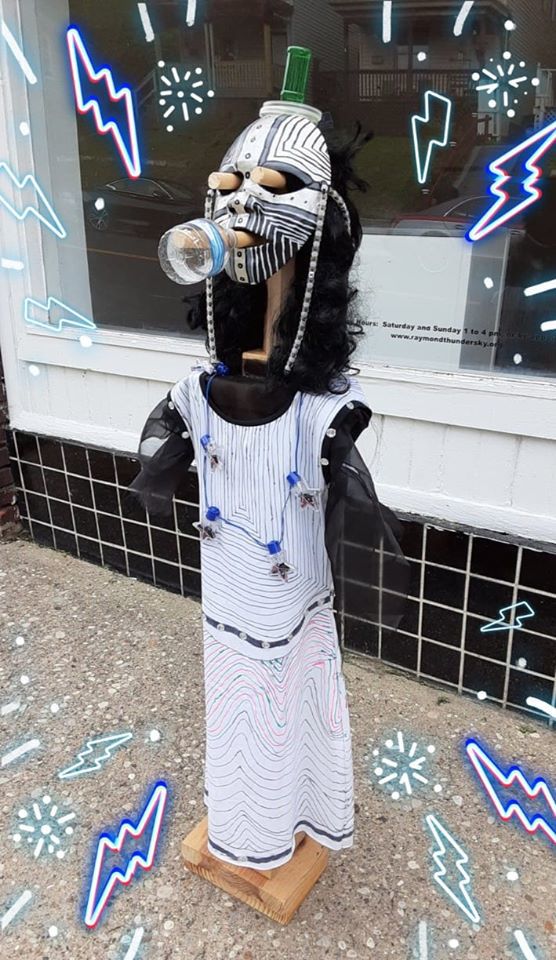 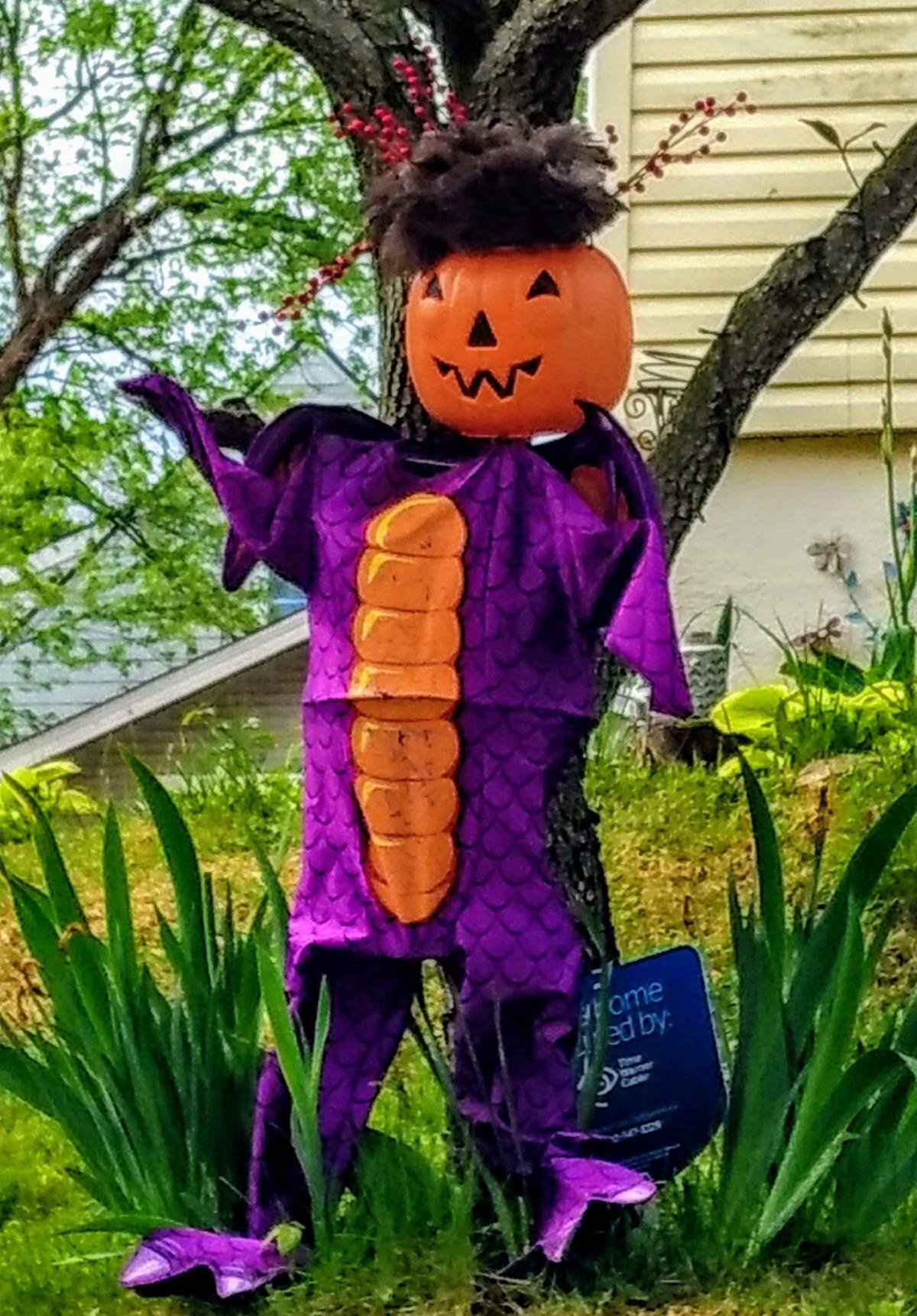 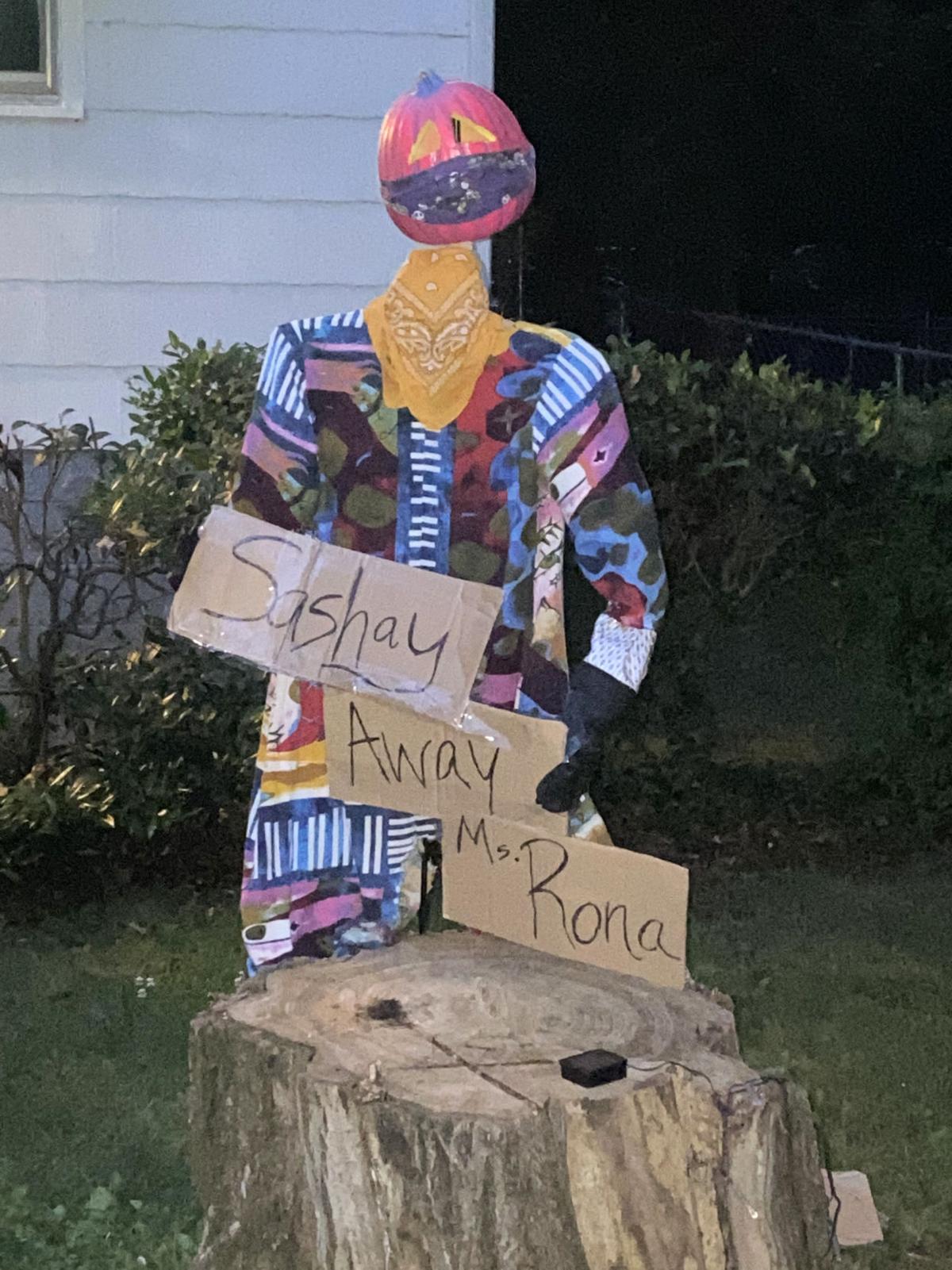 From the Northside neighborhood in Cincinnati to the City of Winston-Salem and beyond, ScareCoronas are coming.

Homemade scarecrows are being put up in yards across the nation, giving those stuck at home something to do to raise spirits and cope with this unprecedented health crisis.

“Individuals and families are working together to create these wonderful, silly and informative structures and share those with their neighbors,” said David J. Brown, director and co-founder of the DENT Creative Reuse Center and Art Laboratory. “It could spur more discussion if you aren’t already tired of talking about what we are dealing with, in terms of the virus and what’s next, all of those things. I think it will promote a lot of goodwill. It is a chance to get outdoors, join gloves rather than hands, and create something on your property you are able to share.”

DENT is a Winston-Salem 501 (c)(3) nonprofit with a mission “to encourage activities, environmental awareness, and building community by making a ‘dent’ in the waste stream, one art project at a time.”

Brown said that DENT is strongly rooted in environmental advocacy and engaging the community artistically. He describes DENT as being composed of “a great little group of concerned citizens and misfits.” The board members of DENT include co-founders Maria Blevins, Trena Sides, as well as Board Chair Jim Connor, Lyndon Bray, Amy Clinton-Corbett, Nancey Cost, Drew Gerstmyer, Duncan Lewis, Jennifer O’Kelly, and Christine Toole.

Brown is a visiting professor at the University of North Carolina School of the Arts and devotes his time to DENT as well as other art projects here and there. Brown has worked as the chief curator at the Cincinnati Art Museum, and he has also worked with art and music legends, Yoko Ono and David Byrne. Brown said he moved to Winston-Salem from Cincinnati in 1999 to serve eight years as the lead curator at the Southeastern Center for Contemporary Arts. Recently, a friend of his from Cincinnati sent him a picture that immediately caught his attention. The picture was of their “ScareCoronas,” which is an appropriately-named scarecrow made from recyclable material found at home.

“I thought, good artists borrow and great artists steal, so let’s bring this to Winston-Salem and open it up to the entire city. It really aligned with what we are trying to do with the DENT Creative Reuse Art Laboratory group here,” Brown said. “It’s my story, it’s yours—and it is about leadership that has been failing us, everybody is scratching their heads trying to figure out how to cope with this thing.”

The ScareCorona project, Brown said, was originally started at the beginning of May by a visual and performing arts photographer, Tina Gutierrez, and her long-time neighbor, a former principal dancer of the Cincinnati Ballet, Rene Micheo, in the Northside neighborhood of Cincinnati. I spoke with Gutierrez via Zoom on Monday, and she said that the project had been a group effort with Micheo, and Reggie Kuhn, whom Gutierrez gives high praise and credits as a key organizer of the project.

“We live in a really artistic neighborhood, and it is known in the city as being a little bit wacky,” Gutierrez said. “I had this idea in the middle of the night... I was unemployed, he wasn’t getting any work, and at that point, I was just in the groove of just trying to exist.”

Gutierrez said she loved the idea of scarecrows because they are already something recognizable. She thought this project would be the perfect opportunity to repurpose these human-like structures into something visually-striking, creative, and informational. She said it took some time for ScareCoronas to catch on in her neighborhood, but when it did, it’s spread to states such as Nevada, Nebraska and now, North Carolina.

“The idea of amulets, or talismans or even armor goes way, way, way back,” Brown explained. “Those things are still in use, and [this project] kind of plays off that.”

Brown said that this project is open to everyone in Winston-Salem, and he said he’d love to see it spread to the rest of the Triad. Gutierrez said she believes the project caught on so well in Cincinnati because of how it was organized: Loose, Inclusive and Long, or “LIL.” She said the Northside ScareCorona Art Show was loose, meaning there were no rules on what people could make or put on their sculptures. She said the project was inclusive for everyone because it didn’t matter what neighborhood people lived in or their housing situation—even those living in apartments could participate. Gutierrez said the exhibition in Cinncinatti lasts a whole month to give everyone a chance to see all the ScareCoronas they can. Brown decided to adopt these guidelines for the project in Winston-Salem.

“I think, at the time, it was out of a desperate need to create,” said Gutierrez, when asked why she felt like she had to start this project. “I really felt like it came from that place of survival. We adapt, and this was a way to survive and get through this. It came from the gut in a way that didn’t really ask permission.”

Brown said the official community exhibition in Winston-Salem starts on June 1 and runs until July 5. (More information can be found on the Facebook event page, “OPEN CALL: The ScareCorona Community Art Project.”)

“People are certainly more than welcome to keep them up as long as they want to, but officially it will last us five weeks,” he said.

Since the exhibition is open to anyone, Brown said probably the safest and best way to see others’ ScareCoronas would probably be to drive around to each stop or by walking around if enough people in a neighborhood participated.

“Reuse any materials you have; it could be branches from trees on your property, clothes, masks— all sorts of things, it is meant to scare off the virus,” Brown said of some of the materials that could be used in building a ScareCorona.

“You can just start with a clothes hanger, and then you attach two more clothes hangers, and then, you can put a pair of pants and stuff it,” Gutierrez said. “People used gardening [tools] for arms, and kitchen utensils—I have seen colander heads. Some people just used a rake. They tied a crossbar on their rake, dressed it and jammed it into the ground, or tied it to the porch. People used flower pots for eyes— you can make a face out of anything.”

When asked if he would participate and make his own ScareCorona, Brown said he would, but he hasn’t started yet. He said he might have big plans for his sculpture.

“I am looking at things lying around, and there is a 6-foot sailfish that we have in the basement that might find its way, but we haven’t decided yet.”

Recently, I made my own ScareCorona, which I have affectionately named St. Quarantina Van Cartier Dupree Excelsior. The materials I had at home to make my sculpture was a ripped up romper, a broken mop handle, a broken curtain rod, a bunch of cardboard, pillow stuffing, old dishwashing gloves, a cloth mask I made too small, some thread, clear packing tape and a hollow Jack-o-lantern for the head. All in all, the project took about two hours to conceptualize and set it up. (I made signs for St. Quarantina to hold up that read: “Sashay away, Ms. Rona,” and “Register to vote in 2020.”)

After one year of being a nonprofit, Brown said DENT is looking to the future in hopes of raising enough funds for a brick-and-mortar location that would serve as an active donation drop-off site and retail store. Brown said space is also needed to host unique and hands-on workshops.

“We are in the process of trying to create a DMU, DENT Mobile Unit,” Brown said, adding that a 1968 van was donated to DENT by one of the board members. “We want to make sure that we have a DENT on wheels and go out in neighborhoods and do programming.”

Brown said Reconsidered Goods in Greensboro is an example of the creative reuse model DENT plans to employ, but with some unique tweaks. Brown said that the organization hopes to be more activism-based with an array of thoughtfully curated recycled materials for resale, with many community partners and collaborations.

“I guess, in some sense, there is a little bit of a silver lining with the pandemic coming through,” he said. “It has opened up some windows of what the world might be like or could be like. I don’t think we are going back to where we were; I think this has caused a big fundamental change in the way that all of us operate. Somehow, we have to figure out how to get together and have the kind of leadership that promotes a healthy, sustainable environment to help everyone and still allow businesses to operate.”

Brown hopes that the ScareCorona project will also help shed some light on the biggest threat facing humanity that isn’t the COVID-19 pandemic: climate change.

“Climate change is real, we are certainly in it and involved in it and affected by it every single day,” Brown said. “I don’t have any time for deniers with specific agendas—I just don’t think it’s a great way to go. So, how are we going to deal with this thing? On a personal level, you do whatever you can possibly do.”

Check out the Facebook event page, “OPEN CALL: The ScareCorona Community Art Project." To learn more about ScareCoronas, and visit the website to see more pictures of the ScareCoronas in Cincinnati.