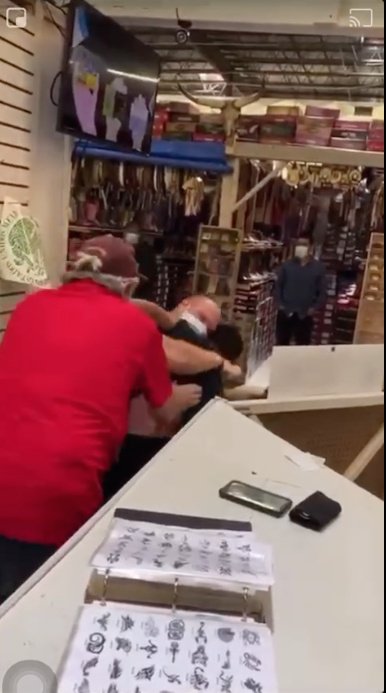 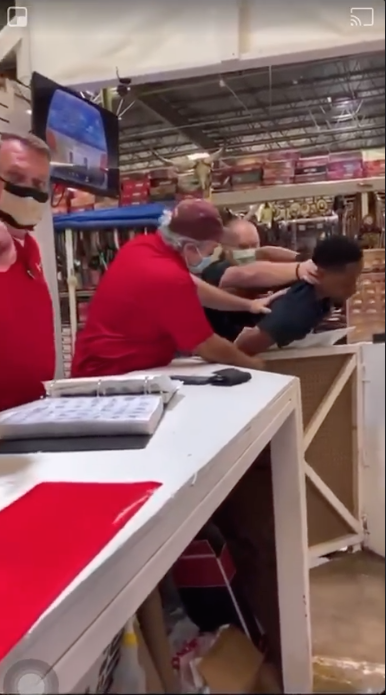 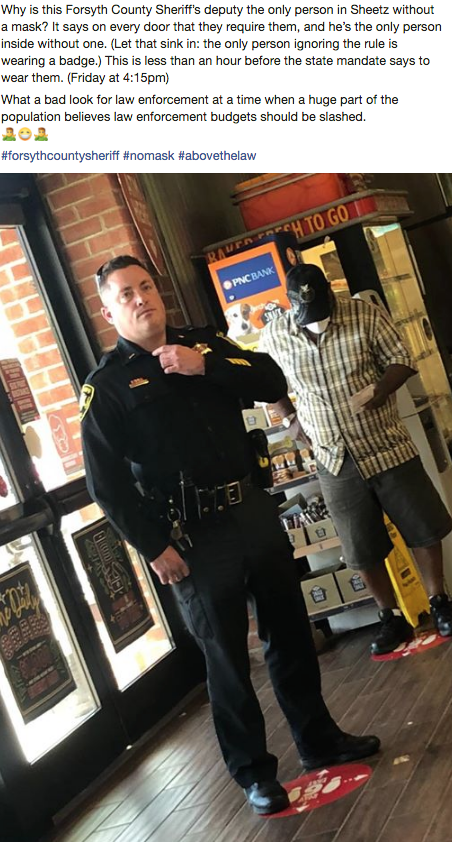 The Forsyth County Sheriff’s Office received flak this weekend after a video went viral on social media, portraying what appeared to be a white FCSO  deputy restraining a Black man (with help from two white men and one black man, appearing to be civilians) at Cook’s Flea Market, located at 4250 Patterson Ave. in Winston-Salem. As the video clip circulated through social media, so did allegations of “excessive use of force” by the deputy.

According to an email on June 28 by FCSO Public Affairs Officer Christina Cooley Howell, the deputy in the video was working an extra duty assignment at Cook’s Flea Market, which regularly employs deputies for security. Howell identified that the others involved “offering assistance were residents and not additional FCSO deputies.”

“Saturday afternoon, flea market staff asked the individual seen in the video to leave the premises. They then asked our deputy to escort him to his vehicle,” Howell wrote, stating that this is a regular occurrence for deputies working at the flea market. “The individual declined to leave. Our deputy again asked him to leave. The individual refused to leave even after multiple requests and then resisted arrest.”

Howell also sent YES! Weekly a response from a representative of Cook’s Flea Market stating that “on Saturday, June 27, an individual at the flea market was asked repeatedly to comply with the state mandate to wear a mask. After verbally refusing to put on a mask, the individual was asked by management multiple times to leave the property. When the individual declined to leave, a Deputy Sheriff providing security at the market was called to escort the individual to their vehicle and was subsequently charged with Trespassing and Resisting a Public Officer.”

Sheriff Bobby Kimbrough, Jr., held a press conference on June 29, where he summarized what transpired before and after the widely-shared video clip. At the press conference, it was announced that the FCSO would not release the body-worn camera footage of this incident to the public.

The sheriff concluded that no excessive force was used in this arrest. “When we are wrong, I want to be the first to come and say to you that we are wrong, and how can we make it right,” Sheriff Kimbrough said. “But when we’re right, and you come for us unnecessarily—I represent all the people of this county—not Black, not white, not Hispanic, not the north, south, east or the west, I represent the county, and I take that oath seriously. But I was irritated and angry all day yesterday and today, over what happened. And what, in the words of one, the ‘shit-stirrers’ tried to create in this community.” Sheriff Kimbrough said he received outrage from as far away as California, and he had received emails calling him “nazi” over the incident portrayed in the video clip. Winston-Salem Urban League President/CEO James Perry, Bishop Todd Fulton, Pastor Tembila Covington, Rev. Alvin Carlisle, Al Jabbar, and District Attorney Jim O’Neill were all invited to view the entire body-worn camera footage and share their perspective with the community during the press conference that day.

Perry agreed with the sheriff and suggested that there were more important things to focus on in the community.

“This wasn’t an issue of racial profiling, in my opinion,” Perry said at the press conference. “If anything, my greatest frustration is that the state prevents the full body camera footage from being shared.”

Jabbar, a Winston-Salem native and community activist said he agreed with the sheriff.

“With no uncertain terms, [the body camera video]shows very clearly to me that the sheriff’s department acted according to the policy that they have been held accountable for,” he said. “There are those of us, as Sheriff Kimbrough adequately stole my words today, who in our community are shit-stirrers, who look for every opportunity to create division and discord amongst this great city. And we are not going to stand and be silent.”

Rev. Carlisle, the president of Winston-Salem’s chapter of the NAACP, agreed with the sheriff’s conclusion.

Bishop Fulton, the pastor at Mt. Moriah Outreach Center, said he also agreed with the sheriff.

“As a Black male, I understand racial profiling, as a Black male, I understand what it means for someone to treat me differently because of this Black robe I have on,” he said. “Upon watching the video, the camera footage from the officer’s video, I find no fault in the way that the officer handled the situation. I am not saying this to be friends with anybody in this room; I am saying it as a Bishop in the Lord’s church because it is the truth.”

While Fulton said he appreciated the media coverage and the community’s concern, “there are so many positive things in our community that happens that never gets covered. But when we make an issue out of something that is Black or white or looks a certain way without looking at the facts, we are doing a disservice to our community. As children of God, we are doing a disservice to our Lord and Savior.”

At the end of the press conference, one reporter asked if the men assisting the officer could be charged with simple assault by the District Attorney.

“I don’t know where you are going with that, but they were assisting the officer in the struggle, so no, the district attorney didn’t say,” Sheriff Kimbrough replied. “There is a statute if I am not mistaken...The Good Samaritan Law.”

(YES! Weekly reached out to the man arrested in the video, who said he’d love to comment but needs to speak with his legal counsel first. As of 6 p.m.June 30, YES! Weekly has not received a statement.)

Before the incident at Cook’s Flea Market occurred, Winston-Salem resident Tom Peterson shared a picture of what appeared to be a uniformed Forsyth County deputy inside of a gas station not wearing a mask. The post stated:

Why is this Forsyth County Sheriff’s deputy the only person in Sheetz without a mask?  It says on every door that they require them, and he’s the only person inside without one. (Let that sink in: the only person ignoring the rule is wearing a badge.) This is less than an hour before the state mandate says to wear them. (Friday at 4:15pm) What a bad look for law enforcement at a time when a huge part of the population believes law enforcement budgets should be slashed. #forsythcountysheriff #nomask #abovethelaw

“It struck me as an ironic situation, there were roughly 20 people in the store, all of whom were wearing face-coverings. (The store requires them.) The only person not wearing one was in uniform, in a tax-funded role that is to ‘protect and serve,’” Peterson wrote in a Facebook message. “I think it is a particularly bad look at a time where many Americans are pushing for reductions in law enforcement budgets.”

“I’m sure he’s a good officer, but I’d respect the individuals and the institution a lot more if they would simply wear the face-covering when it is required,” he added. “It’s not that effortful, and we could use their leadership and good example in a time of national and local crisis.”

YES! Weekly emailed Howell the morning of June 27 with the following questions: If the photo is of a FC sheriff’s deputy, what would be Sheriff Kimbrough’s response? Does he require his staff to wear masks while on duty? Also, is Sheriff Kimbrough one of a number of sheriffs in North Carolina that aren’t enforcing masks?

Howell responded with the following statement:

“As with all of the restrictions implemented in response to this pandemic, if we encounter violations of the order, we will engage the involved individuals in conversation. We first and foremost seek to educate individuals with the goal of achieving voluntary compliance based on concern for the health of our entire community. We have reiterated the importance of wearing masks while interacting with the public in compliance with the executive order. It should be noted that some of our deputies fall under the exception categories, and there are circumstances in which masks are not appropriate for  various reasons (i.e., officer safety). We appreciate our community’s concern for the well-being of others and for holding us accountable.”