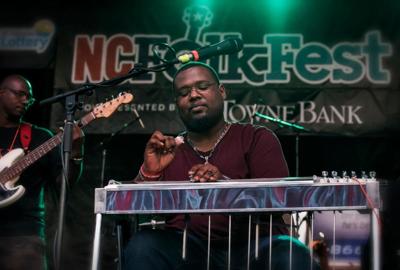 Greensboro, N.C., July 13, 2020 — The North Carolina Folk Festival announced that due to ongoing community-wide health concerns related to COVID-19, and the logistical challenges of creating a safe in-person event experience, this year’s Folk Festival will take place virtually. The pre-recorded live performances will be streamed online the weekend of September 11-13, 2020.

“While we will miss gathering together in downtown Greensboro this September, we believe the high quality virtual festival experience that can be enjoyed from home in small groups of family, friends, and neighbors is the best way to ensure the health and safety of our audiences, staff, and artists during these unprecedented times,” said Amy Grossmann, President & CEO of the North Carolina Folk Festival.  “We are excited to produce a new way of showcasing folk traditions and performances through streaming and broadcast platforms. We will announce this Festival’s performers over the next few weeks.”

The 2020 virtual N.C. Folk Festival will be produced in partnership with 7 Cinematics, the EMMY Award-winning video, music, and streaming production company based in Greensboro.  7 Cinematics previous work has included streams and broadcasts of performing artists such as The Red Hot Chili Peppers, Kanye West, Jack White, and Dead and Company, among others. “Growing up in Greensboro and then returning here to raise my children, I could not be prouder of our partnership with the Folk Festival,” said Adam Paul, CEO of 7 Cinematics.  “We are very honored to help during this year of transition and look forward to creating some special moments of happiness for music fans around the state, country, and even the world.”

About 7 Cinematics: 7 Cinematics is a three-time Emmy Award-winning production company, known for producing the world’s foremost live-music broadcasts and video streams. With hundreds of live shows produced to date, the company has redefined an industry, by creating and producing groundbreaking broadcasts, including: The Red Hot Chili Peppers Live from the Great Pyramids, Kayne West’s Sunday Service, The Brothers 50 at Madison Square Garden, The Raconteurs (Jack White) Live at the Ryman Auditorium, Dead and Company Live at Folsom Field. The company’s work has aired on NBC, Direct TV, PBS, CBS, Netflix, YouTube and other streaming platforms.  Headquartered in Greensboro, North Carolina the company also has studios in Nashville and Los Angeles.

About the Piedmont Blues Preservation Society:

The Piedmont Blues Preservation Society (PBPS) is a 501c3 charitable non-profit dedicated to the preservation and presentation of the culture & music known commonly as the Blues; this form of music having evolved historically from the culture & experiences of African-Americans including work songs and spirituals. Our organization documents and preserves both the African-American and North Carolina Blues traditions, and presents educational programs, seminars, and workshops meant to revive, maintain, and grow interest in Blues in our regional community. We represent Blues culture through educational programs, workshops, and with a focus on historic accuracy and cultural authenticity. We collaborate with other non-profits and with regional and global businesses to highlight the Piedmont as a place to not only live but a place to experience rich culture and history. Our services support public health issues, educational initiatives, and societal concerns while promoting local businesses, tourism, the Arts, and education. https://piedmontblues.org/.