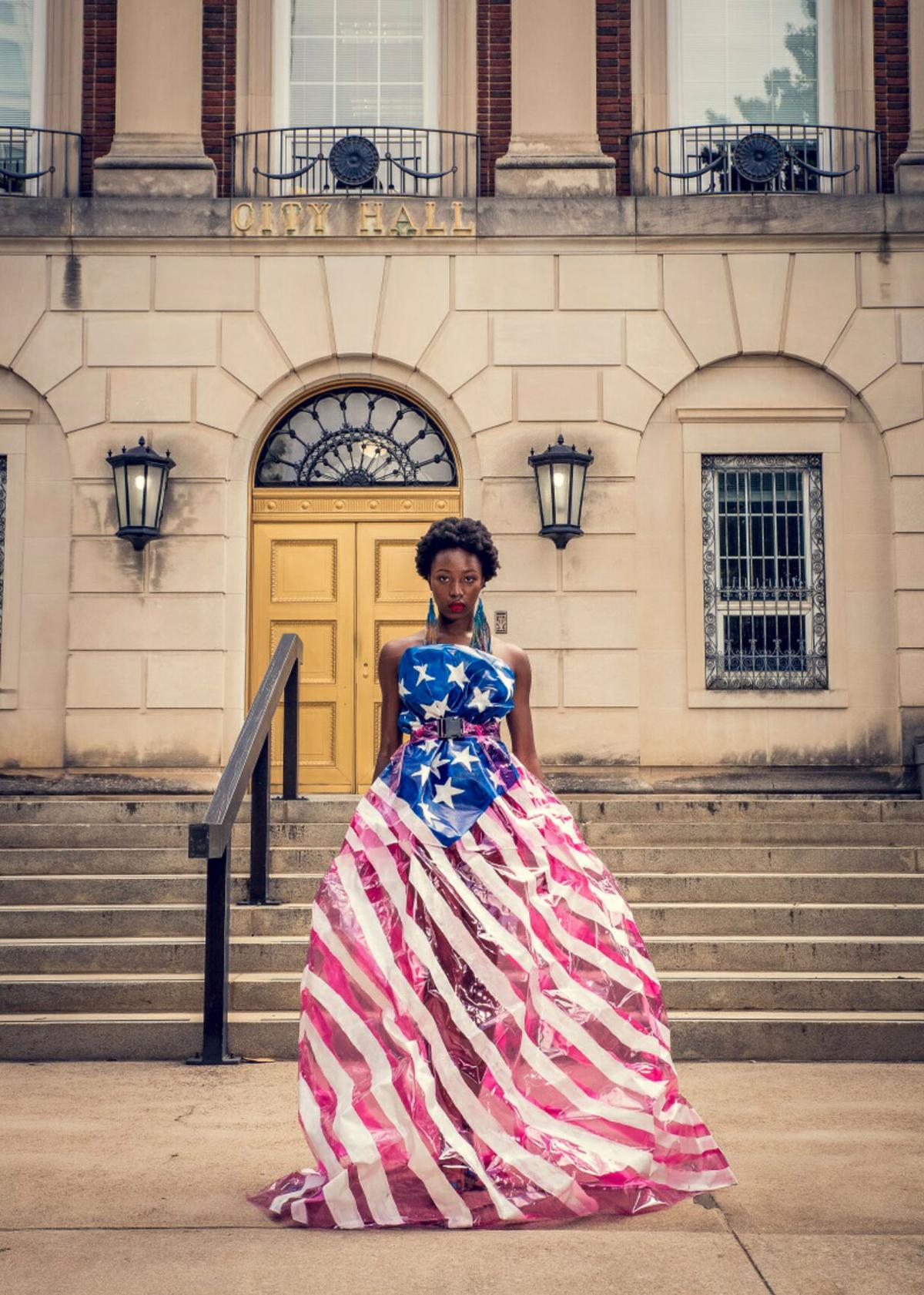 Photo from No Punching Bag’s “Ballot Collection,” a fashion line that advocates for voter participation in the 2020 election 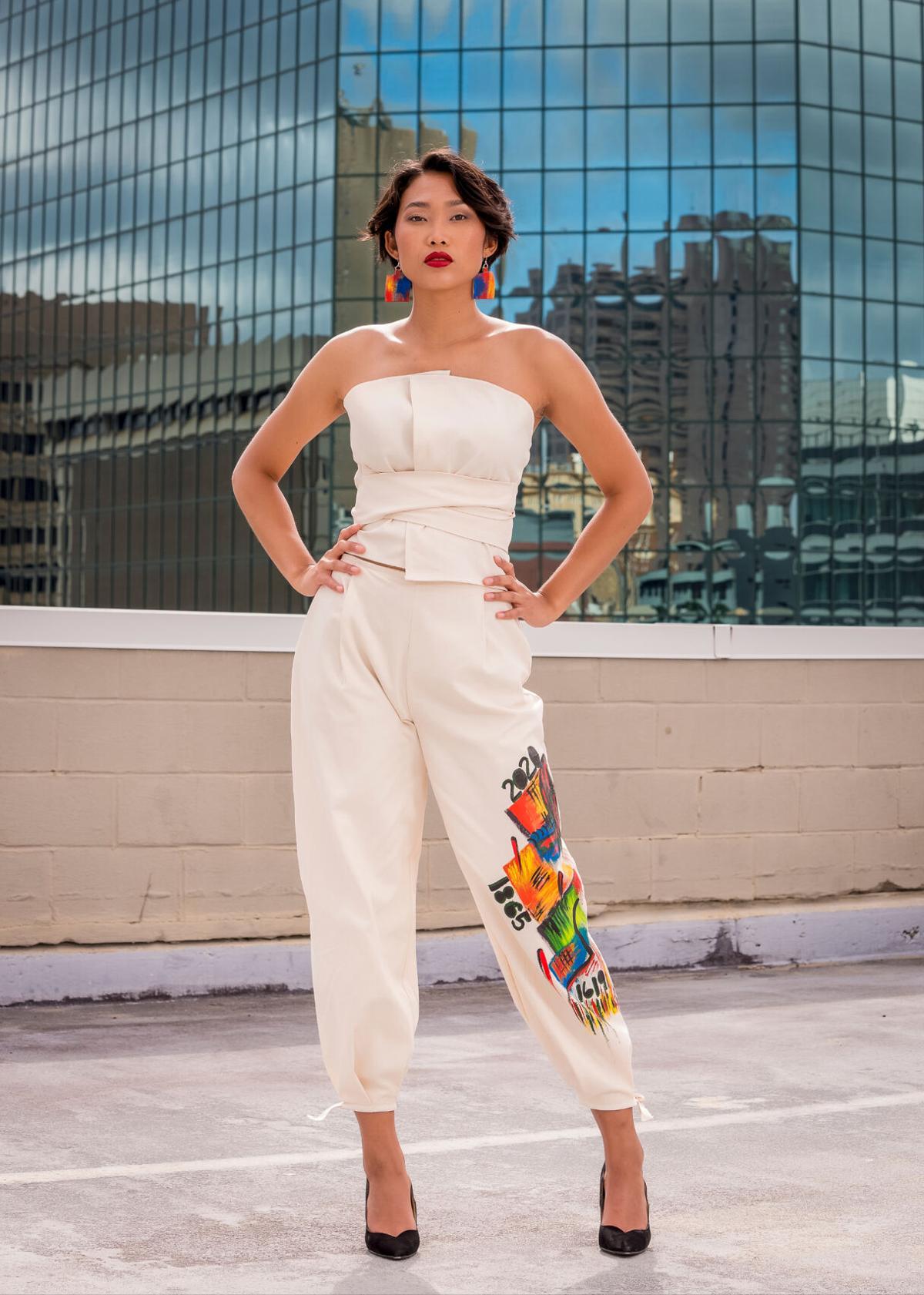 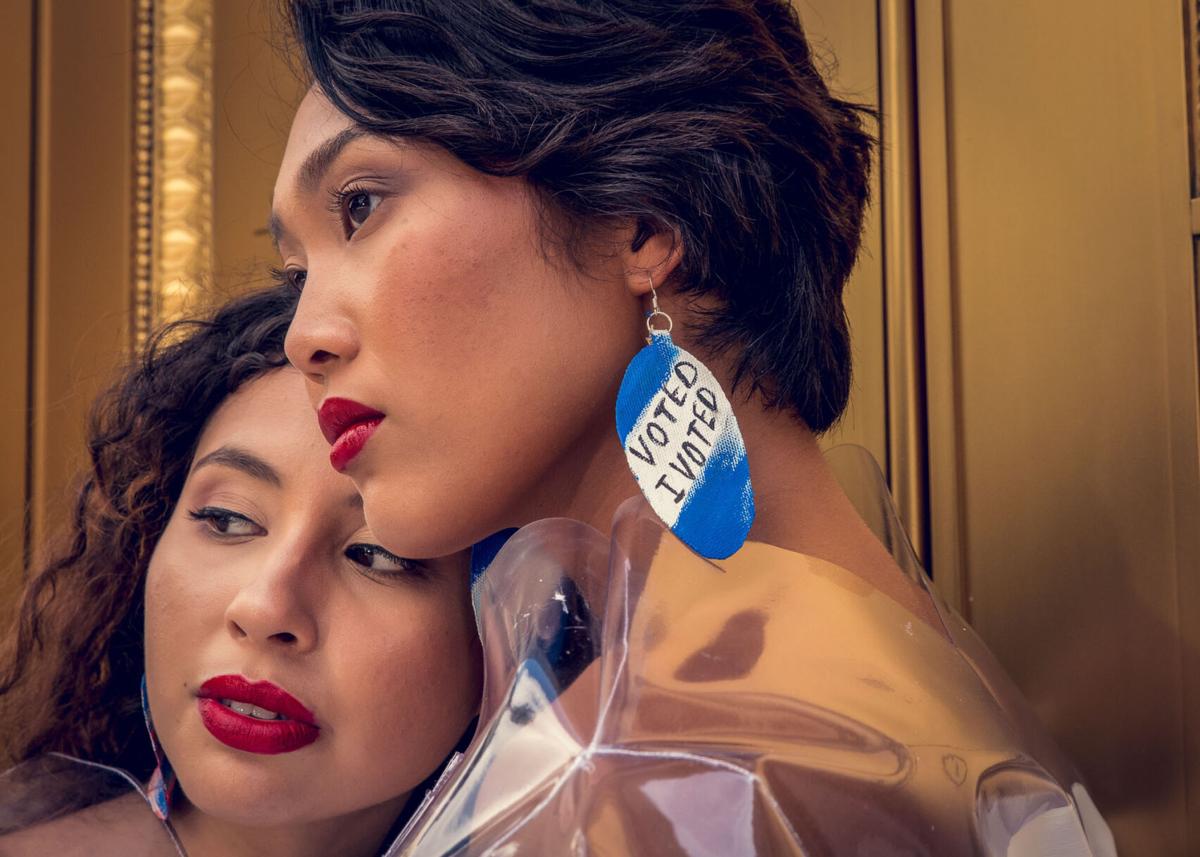 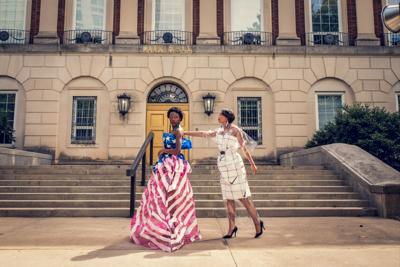 Photo from No Punching Bag’s “Ballot Collection,” a fashion line that advocates for voter participation in the 2020 election

The socially conscious family of fashion designers are not strangers to making a statement through their art. The mother-daughter trio of No Punching Bag have embedded their brand in advocating change for various social issues plaguing the United States, such as beauty stereotypes, gun violence, domestic violence, and racism. Now, they are using their platform to promote voter participation in one of the most important elections in the history of the United States.

Matriarch Angel Fant and her daughters Danielle and Tenijah Renee created the “Ballot Collection,” which features 15 garments that each highlight the importance of voting in the United States, and especially in the 2020 election.

“Due to everything that is going on and has been going on, I felt like people really needed to be advocated by voters,” Angel said. “Voting is about creating a better community and a better world. I just wanted people to know how important it was.”

The collection was released via Facebook three weeks ago and was prefaced by a video (produced by Franklin Terry) designed to immediately grab the attention of the audience. Danielle said that the dystopian horror flick The Purge was the inspiration. The video encourages viewers to “stay woke and vote” because, in this election, voting “is not just for you; it’s for all of us.”

“I don’t think that people realize how critical voting is,” Angel said. “A lot of people only vote during the presidential elections, and they don’t vote any other time.”

“When I went to go vote early, I thought we were just voting for the president,” Tenijah Renee said of her first time voting in the primaries. She hopes that the collection not only advocates for voter participation but also encourages more first-time voters, like herself, to get involved in the democratic process and stay involved on the local and national levels.

The COVID-19 pandemic canceled the majority of No Punching Bag’s plans this year, including their plans to showcase their work at numerous out-of-town fashion weeks. Angel said they already had the idea of the “Ballot Collection” last year, but the pandemic’s effect on the country and the national response— or, rather, the lack thereof— motivated No Punching Bag to follow through with their idea and create this fashion line designed to change the mood around voting.

“For me, it is like an awakening,” Angel said of voting. “You are activating the America you want by voting— the ballot is what is key to the United States of America. That is why they didn’t want Blacks and women to vote— they didn’t want us to have rights.”

“I feel like we are making voting cool, especially with our ‘I VOTED’ earrings,” Danielle added. “It is like voter’s pride. That is really just like the feel we have given to the collection and vibe of voting.”

No Punching Bag wanted the “Ballot Collection” to represent and show the history of the United States’ troubled past through a futuristic fashion lens.

“Even though we aren’t necessarily fans of a lot of history,” Angel said. “It is still history, and we wanted to represent that, and normalize the African-American with the flag— to say that this is our America, too. We are here, too, so acknowledge us.”

This summer, amid nationwide unrest regarding the deaths of George Floyd, Breonna Taylor, Ahmaud Arbery, and countless others by racism and at the hands of police, No Punching Bag organized several car parades they called “Rides Against Racism” to protest while also practicing social distancing. Even though the convoys saw over 200 cars, Angel said many still view Black Lives Matter as a trend. Angel said the unrest was also a catalyst to create the “Ballot Collection.”

“There are a lot of people, as time goes on, that are not acknowledging the Black Lives Matter movement,” Tenijah Renee said. “At the beginning of the video, we made sure to let people know that Black lives still matter, and it continues with voting.”

Two of the most striking pieces of No Punching Bag’s “Ballot Collection” can be seen through the powerful picture of two models wearing Danielle’s designs.

One of the models, who is Black, wears a handpainted, traditional American flag gown made out of vinyl, and the other model, who Angel said is of Asian descent, wears Danielle’s handpainted black and white “ballot” dress also made out of vinyl. The model wearing the ballot dress is photographed, reaching their arm out to try to grasp the model wearing the American flag dress.

“As far as the dress and race, it says that America includes Black people,” Angel said of her interpretation of the American flag dress. “You aren’t someone that just happens to be here— you are actually part of the foundation of America.”

“A lot of people make us feel displaced, but it’s the opposite,” Tenijah Renee added. “It is our America, too.”

Angel called it “divine intervention” that both of these models ended up being people of color.

“That is something that was destined to happen,” she said. “[Thorugh this picture] we are saying, America is built up of everyone, not just one race. It means a lot, and I think this is one of the most important collections that we have done.”

Angel said she hopes this particular photo translates how important voting is to democracy, especially to those that look like her.

“Some people don’t vote; I know all races don’t vote, but particularly, a lot of people from where I am from say, ‘our vote don’t matter,’ or ‘our vote doesn’t count,’” she said.

“They think nothing is going to change,” Tenijah Renee added.

“I think that other races that are also considered ‘minority,’ also believe that [voting] doesn’t affect them,” Angel continued. “They don’t have a voice in the race. Some say it is a ballot between white and Black as if nobody else is here. For instance, with the situation regarding the hysterectomies and all of that— where is the outcry? We have to stand up for [all] communities.”

Angel said that at first, No Punching Bag was uncomfortable about incorporating the American flag in their designs because of how the flag has recently been weaponized against people of color.

“Especially as African-Americans because we didn’t want to necessarily celebrate the flag,” Danielle explained. “With everything going on, it is hurtful.”

The designers decided to reclaim the flag to send a message of hope to the historically oppressed and marginalized people of the United States. To tell them through art that they belong in this country and that they are a crucial part of this election.

“We are going to show people that we have to vote,” Danielle said. “We have to let people know we are here and we are not going anywhere. We should be able to celebrate America.”

“One thing that 2020 and the marches have taught me is that when you are talking about all these years ago, and we are still here, but it just looks a different way, that means we have been spoon-feeding the whole situation,” Angel said. “This doesn’t make any sense; we need people to get out there and vote. Until we get it right, we aren’t going to make much progress.”

Being Black women in an industry still dominated by white men, Angel said No Punching Bag had experienced discrimination just because of the color of their skin.

“We don’t like how we have been treated as designers, Black designers— we have gone places and were treated differently because we were Black,” Angel said emotionally. “It’s embarrassing, and it hurts, especially because my kids are doing this, too.”

Tenijah Renee said that she feels like they are often held to a higher standard because of their race, and that “it seems like we are always proving ourselves,” Danielle added.

Tenijah Renee also has an American flag dress design, but it’s a bit more of an abstract interpretation. Her American flag vinyl dress design is shorter and is embellished with gold paint, to represent the greed within America.

Angel discussed the meaning behind her design of the white outfit, with three dates handpainted on the side of the leg. Angel said the dates 1619, 1865, and 2020 are all important years in African-American history.

She said the year 1619 was when enslaved Africans were forcibly taken from their homes and brought to what is now America, to be brutalized and enslaved by the white man.

The date 1865 represents President Abraham Lincoln’s Emancipation Proclamation, the so-called liberation of enslaved Africans. Angel noted that it wasn’t until 2013 that Mississippi ratified the amendment that officially abolished slavery. And 2020, the last date on the garment, Angel said, is another important date that highlighted “the awakening of what is going on with Black people in America— and now it is time to re-address this.”

“Slavery isn’t just people out in cotton fields anymore—it is now happening to kids and women, and all of this is still going on in America and around the world. Kids are being kidnapped and sold into sex slavery,” she added. “Even with ICE, I feel like that is another form of slavery. What are the plans for those people? If [the United States] wanted to send them back, then send them back, but [the government] is holding them here and torturing them. It is not OK. These are humans. You shouldn’t even do that to animals. To me, how is it possible to do these things to people? I just don’t get it; why do we need to create new laws to protect people that are already supposed to be born with rights?”

No Punching Bag’s “Ballot Collection” brings uncomfortable, yet much-needed discussions about race in America to the forefront, while also highlighting the importance of democracy for future generations.

“The vote is for all of us,” Angel reiterated. “You can’t just vote for yourself—nobody is out to get other people’s stuff. We all just want to be treated equally.”