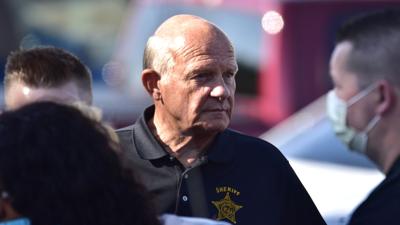 *Editor’s note: This article was updated on Sept. 14 with additional information about ICE and the number of total cases.

“Just let everybody know we dying.”

That’s the message an inmate in the Alamance County Detention Center who recently tested positive for COVID-19 conveyed to YES! Weekly via a Greensboro relative, along with a request not to be identified due to fear of retribution.

The North Carolina Department of Health and Human Services has reported no deaths for the Alamance Detention Center, but the Sept. 11 update of the department’s twice-weekly COVID-19 Ongoing Outbreaks in Congregate Living Settings bulletin lists 116 inmates and 10 staff members as having tested positive— 23 more inmates and four more staff than were reported on Sept. 1.

In response to YES! Weekly’s inquiry about what precautions are being implemented to prevent outbreaks at the Forsyth Detention Center, Christine Howell, Public Affairs Officer for the Forsyth County Sheriff’s Office, sent the following statement from Dr. Christopher Ohl, professor of infectious diseases at the Wake Forest School of Medicine.

“The Forsyth County Detention Center has a robust and well thought out testing and quarantine process for all incoming detainees. There will be COVID positive detainees brought into the Detention Center; these cases are identified and isolated appropriately. All new detainees are quarantined for fourteen (14) days as an additional precaution. The Forsyth County Detention Center is being regarded by the Department of Health and Human Services consultants as a model for how to prevent cases and integrate best practices during this pandemic.”

Along with quoting Dr. Ohl, Officer Howell wrote that all staff are checked daily for symptoms and fever; all newly admitted inmates are interviewed by the center’s contracted medical services provider regarding exposure to and symptoms of COVID-19; all staff that interact with new inmates wear N95 respirators; all detention and contract staff wear surgical masks while interacting with inmates; and staff wear masks when they cannot practice social distancing while interacting with coworkers.

Howell said current inmates at the detention center have received surgical masks to wear, and each housing unit has foaming hand sanitizer readily available to residents.

Guilford County Sheriff’s Attorney Jim Secor described similar measures at the Greensboro and High Point jails. Secor said new inmates are quarantined for 14 days— all employees, attorneys and vendors are given daily temperature checks; masks are provided to all inmates; all detention officers are required to wear masks while on duty; and all employees are encouraged to practice social distancing whenever practical.

“Since March, the Sheriff’s Office has followed specific COVID safety measures. Some of these include: increased cleaning and sanitizing (which is in addition to the state and federal guidelines that are extremely high) and implementation of COVID screening for arrestees. All arrestees have been screened for COVID by ACSO medical staff before being allowed inside the detention center. Anyone with symptoms would be taken to Cone Health for testing and further screening. If returned, jail staff would follow all recommendations from Cone Health regarding the individual.”

Mills stated that the first COVID-19 case in the detention center was identified Aug. 24. To Blunk’s question as to what additional protocols have been put in place since, Mills responded:

“This process has not changed as arrestees will continue to be screened, but moving forward, medical staff with support from the Health Department, will test all inmates and detainees who will be quarantined until their results are received. There were also numerous internal precautions that were implemented. Some of them include: limiting the number of visitors inside the Sheriff’s Office lobby, staggering of administration staff, and distributing PPE. The Health Department is also conducting ongoing testing each week, contact training, and surveillance for both inmates and staff for the foreseeable future. Anyone who tests positive is in quarantine until released by the Health Department.”

Relatives of multiple inmates the Alamance County Detention Center have expressed concern about conditions there, alleging that no “hygiene kits” or even hand sanitizer bottles have been distributed, that their family members held there have not received new toothbrushes for weeks, that new inmates are not being quarantined and that guards rarely wear masks.

YES! Weekly has been investigating the allegations about the Alamance County Detention Center, as well as allegations by a Forsyth County Detention Center inmate that his roommate was only put into isolation for eight days after testing positive. In late June, photos circulated on social media of what appeared to be a uniformed Forsyth County deputy without a mask inside a Sheetz, in which all other customers were wearing face coverings. This writer has repeatedly observed similar behavior from Alamance County Sheriff’s Department officers on the streets of downtown Graham.

“Just let everybody know we dying.”

As previously reported, when an activist asked the controversial Alamance County Sheriff Terry Johnson why he wasn’t wearing a mask at a neo-Confederate counter-protest, he replied that she was “breaking the law” by being a member of Antifa, and stood by laughing as she was threatened by two unmasked neo-Confederates, one of whom shouted directly in her face.

Another activist, Ashley Reed, told YES! Weekly that, when she was arrested at a Graham protest on Aug. 15, “the only person at the jail who had on a mask was the nurse.” Reed said that Graham Police Lt. Duane Flood, who handcuffed her while waiting for the patrol car, refused to put on a mask even after she asked him to, although he “pulled two out of his pocket to show me had them.”

Reed also alleged that Officer Newsome, who drove her to the jail in his patrol car, only put on a mask after she said she wouldn’t get in it unless he did. “You could tell he wasn’t pleased, but he did it.”

Reed also alleged that the Magistrate wore no mask. “We did transfer papers and a pen to each other, and there was no hand sanitizer anywhere. The cop’s safety is to important I had to stand there and remove my necklace, my nose ring, my belly button ring. I was fine with that, but they wouldn’t even put on a mask for me.”

On Sept. 8, there was a protest at the Alamance County Commissioners meeting about the COVID-19 outbreak at the detention center and the alleged refusal by county and city law enforcement and detention officers to wear masks.

When protesters stepped into the jail parking lot next door to the government building, Sheriff Johnson and his deputies quickly arrested four of them. As is his usual practice, Johnson did not wear a mask, even when personally arresting several masked protesters.

According to the Burlington Times-News, three protesters were arrested for being in the street and parking lot (both public spaces), and a fourth for “cursing.” Protesters allege that Johnson regularly arrests them for doing that, while ignoring or even laughing at obscenities uttered by neo-Confederates.

“He didn’t lock us up,” said one arrested protester. “Just exposes us to a deadly virus and releases us back into the world.”

Alamance County’s Detention Center is the only jail in North Carolina that, under a special service agreement, can temporarily house migrant detainees on behalf of Immigration and Customs Enforcement. According to Siembra NC director Andrew Willis Garcés, it “has become the ICE processing center of North Carolina.”

On Sept. 9, North Carolina Health News reported  that “At least one death can be traced to a transfer from Alamance to another detention center with an ongoing outbreak.” The death was that of Jose Guillén-Vega, a 70-year-old detainee from Costa Rica, who was held in the Alamance County Center before ICE moved him on July 15.

Guillén-Vega was sent to Stewart Detention Center in rural Georgia, a for-profit facility with 323 cases. He was awaiting deportation after serving time on a felony conviction when he was picked up by ICE in North Carolina. He contracted the virus during his travels in the detention system and died on Aug. 10.