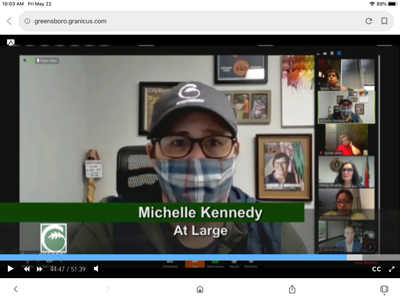 “I do want to make sure masks or face coverings are required for city employees,” said representative at-large Michelle Kennedy during Thursday morning’s special meeting of the Greensboro City Council. “I’d just like to hear from the city manager where we stand on that.”

“It’s hard, human resources and personnel wise, to provide a disciplinary action for something along this nature,” replied city manager David Parrish. “But we are again, repeatedly encouraging and asking folks to wear the masks as appropriate.”

District 5’s Tammi Thurm said that she often sees city trucks containing as many as four people close together, none wearing masks.

“I think we ought to consider making masks be one of that safety protocols that are non-negotiable.”

Kennedy agreed. “I think that this is a policy issue and it’s something we have to enforce.”

“I’m not trying to be funny, but we don’t enforce policy in other areas. I understand this is serious, but we need to enforce consistency of accountability.”

Kennedy compared masks to hardhats or seat belts. “I absolutely don’t see this as a punishment issue, but we have an obligation to protect our employees and the public that they serve.”

“We will certainly add this to the review of those teams and make sure we follow those best guidelines,” Parrish said.

“He is our employee, and directing him to do what he feels best for the 35,000 employees is the way I would like to see this go.”

“They walked out on us a couple of weeks ago, but we can still see that they’re operating the buses, and they’re not all wearing masks. I think that our employees, when they’re out in the community, they should be wearing masks.”

“I don’t disagree with you, Madame Mayor,” Hightower said. “I just think that there’s a way to convey that message so that it doesn’t come across as a punishment.”

Kennedy pulled the mask she’d been wearing around her neck up over her mouth and nose. “This is what I look like about 14 hours a day, every day, everywhere I go. It’s not my favorite thing in the world, sometimes It fogs up my glasses, and its miserable and everything else. But this is the reality of the situation, because I committed to the people I’m responsible for”

She said that the city needed a firm policy for its employees. “That fact of it is, in the community it’s still not being followed, so it’s time to move to another level of compliance.

“I don’t feel comfortable as a city council that we need to make this policy,” Abuzuaiter said. “It’s very much like what came out a couple of weeks ago to make everybody in the City of Greensboro wear one. Well, that seems an impossibility to me, because we would have to have 600,000 masks. So, I feel comfortable in directing the city manager to do what he feels is best, in consultation with medical professionals and the HR department.”

“Some folks act like it’s going to pass,” Wells said. “I know about 20 people who have died of this thing, somebody just died yesterday. So, it’s real. It’s really real.”

Parrish repeated that he would be discussing this with staff later that afternoon. Vaughan said council would follow up on at their next meeting on May 26. “I think after the city manager has the ability to meet with his department heads, and we can see some progress, we should be able to revisit this.”