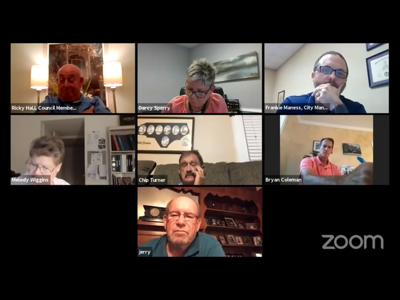 One was silenced and another interrupted while speaking about Alamance County’s Confederate Monument. A third criticized the council for allowing Councilwoman Jennifer Talley to vote for her husband Chuck Talley’s appointment to the Alamance County Historical Museum Advisory board, a move the speaker called “nepotism” before being shut off.

The reason cited by Mayor Peterman for shutting off discussion of the monument was litigation over free speech.

Peterman and the city council are listed, along with City Manager Frankie Maness, Police Chief Jeffrey Prichard, Alamance County Sheriff Terry Johnson and County Manager Brian Haygood, as defendants in NAACP Alamance v. Peterman (Protest Rights), an emergency lawsuit filed on July 2 by the American Civil Liberties Union of North Carolina on behalf of the Alamance branch of the NAACP and nine civil rights leaders. The lawsuit seeks to end the city’s anti-protest ordinance, which, the ACLU of N.C. alleged, has been “used to suppress protests against racism, police brutality, and white supremacy.”

On Aug. 1, the city and county restricted protest to “free speech zones,” banning anti-monument demonstrators from the courthouse grounds, steps and sidewalks. On Aug. 14, Judge Catherine Eagles issued a preliminary injunction striking down that ban, stating it violates protesters’ First Amendment rights. The object of this contention is the Alamance County Confederate Monument, which stands on the site where Black constable and political organizer Wyatt Outlaw was lynched and was erected by the Klansmen who lynched him. Protesters want the monument moved out of the pubic square and into a museum or a cemetery.

At the Aug. 11 meeting, the first item of new business was discussion of the efforts by Graham, Mebane and Alamance County to entice United Parcel Service to locate a proposed regional headquarters and distribution facility in the North Carolina Commerce Park. At 34:19 of the meeting, a speaker identified only as Maggie asked UPS representative Kevin Zaletel if he was aware that Graham “has a history of working with known white supremacists and will not vote to take down the statue that is bringing armed white supremacists downtown.”

“All right, let’s stop that one and go to the next,” Peterman said. The next speaker, Nikki Cassette, condemned Peterman for muting her predecessor.

“I think that’s a really valid point, that if UPS really wants to bring their business into a town, a lot of businesses would really like it to be a town that . . .”

“Mayor, I think this is irrelevant.”

Carey Kirk Griffin, a frequent speaker at council meetings, also said she was bothered by speakers being cut off. While Griffin was not silenced then, she was during the Boards and Commissions section of the agenda, after Councilwoman Talley voted for her own husband for the Historical Museum Advisory Board.

At 1:10:46, Griffin said that Talley should have recused herself, but instead nominated her husband.

“Do you understand what nepotism means?”

Mayor Peterman cut her off and asked City IT manager Jeff Wilson “have we got anyone else?”

Peterman later addressed Griffin’s comments by stating “it doesn’t have anything to do with nepotism, as there’s no money involved.”

Councilwoman Melody Wiggins disagreed.  “While it is not illegal in local government to put forth that information and to nominate your own spouse, it is highly unethical in the oaths on ethics that we have taken, so they are partially correct, in that it is unethical and inappropriate.”

The last half-hour of the meeting was devoted to items not on the agenda. No further speakers were cut off, but the mayor and council members did not respond to criticisms and refused to answer several questions. Speaker Janet Ethelberger said it was “uncomfortable to see the discord in our elected officials making it all the way to a feature article in the Washington Post,” and that “for decades, Graham and its surrounding area have practiced undeniable racism.”

In the video, titled “Looters Beware,” two young men display a small arsenal of weapons, including a stainless-steel K-frame revolver, a composite stock AK, another AK with a thumbhole stock, two AR-15s and a 9mm pistol. “Get this on video” says one young man, unzipping a case to reveal a heavily accessorized AR-15. “Sick!” responds the other. They then turn the camera on a Black driver parking across the street. “Get back in your car, take your sign, and go home,” There was no indication the driver, who carried no sign and was too far away to hear what they were saying, was there to protest.

“Can you clarify your public statement regarding that infamous video showing armed people inside your business outside normal operating business hours?” asked Cassette. “Councilmember Talley has stated that the person was unknown, but many in the community, including present employees, know who he is, and that he has done business there in the past. Further, Talley’s daughter also appears in the video, and that, plus the persons with guns clearly having access to the business when it is closed, seems to counter your public statement. Can you clarify?”

“I would advise Jennifer not to say anything about that,” Mayor Peterman said. “We are still under litigation. If you’ve got any other comments, please direct them to me instead of attacking one of the council members.”

Cassette then directed a question to Maness.

“Has the city of Graham or its police department followed up on questions about that video as well?”

Maness did not answer.

Griffin then asked how the video was relevant to the ongoing litigation.

“Isn’t the lawsuit in regards to protesting?

“The lawsuit is in regards to the First and Fourteenth Amendments,” the mayor said.

“Is that video in litigation?” Griffin asked. “Is that what you’re telling us?

“I am telling you that we are still under litigation,” the mayor said, “and I don’t know if that video is part of it or not.”

“I feel like your lack of answer is definitely voluminous and I understand what you’re saying,” Griffin said.

At 1:38:00, a speaker Eric Christman asked why Councilwoman Talley does not appear onscreen during the city council’s virtual meetings, even though all the other council member do (there is also no photo of Talley on the Graham City Council website).

“If it’s a public meeting, I think we ought to be able to see everyone that is attending the meeting. It certainly would not be acceptable for a council member to attend the meeting in the council chamber and sit behind a screen where we could not see that council member’s face.”

“We had some members that didn’t want to be seen,” Mayor Peterman said. “We ran it through the attorneys, and they said it was her priority, or whatever that word is.”

Johnson said that downtown Graham had become uncomfortable for him and his 5-year-old son in the past few weeks, that he had been called the N-word five times, and that he had been addressed as “boy” on several occasions since the last council meeting. He also referred to the signs in Talley’s shops that read “Keep Graham like it is,” by asking, “Why would anyone want to keep this town dangerous and unwelcoming to local residents and their friends and family?”

An email from citizen Amy Cooper dated Aug. 11 also expressed concern about people of color being made to feel unsafe downtown.

“There are Black and Brown families in your community that are being targeted by Confederate supporters who are drawn to our town because we have the last standing Confederate statue in North Carolina. No one is addressing this issue. It is appalling to me that the public safety of everyone is not of vital importance to the members of county government. Your silence on this issue speaks volumes. Your community is suffering. Will you respond?”

Neither the mayor nor any council member did.

An Aug. 11 email from Bennett Harris also referred to the video shot in the Talleys’ hardware store.

“My questions (to follow) are not in any way against the Second Amendment or open-carry, but instead are about public safety (during protests) and also about the soul of Graham and the image we want to share with the world of Alamance County.”

“Has law enforcement (Graham PD or the Sheriff’s Office) identified the people in this video, and if so, have they spoken to them? Is there any other information available?”

“Will each of the city council members and the mayor be willing to state publicly that they disagree with vigilante action by citizens, and that bringing weapons (concealed or open-carry) to protests is not allowed by North Carolina state law? Further, will each of you publicly state that you are against members of ACTBAC, pro-statue counter-protesters (who have been bringing open carry weapons to past events), as well as any protesters or anti-statue people bringing weapons to Downtown Graham?

“Can you admit (if not publicly, then at least to yourselves personally) that even though the actions by the young men in this video are solely their own responsibility, that continued curfews, states of emergency, and public statements about the dangers of protests (that have thus far been peaceful on the part of the anti-statue protesters) may have helped to create the environment of fear that pushed these young men to do this action?”

The response from the council and mayor was several minutes of silence, during which one council member appeared to have fallen asleep, and it became evident that Mayor Peterman’s video had frozen.

“I think that you froze at the end of Darcy’s last letter,” said Maness once Peterman’s feed was restored.

“Hate I missed part of that,” Peterman said. “I’m sorry, Darcy. I’ll read ‘em tomorrow when I see you.”

The meeting then adjourned.