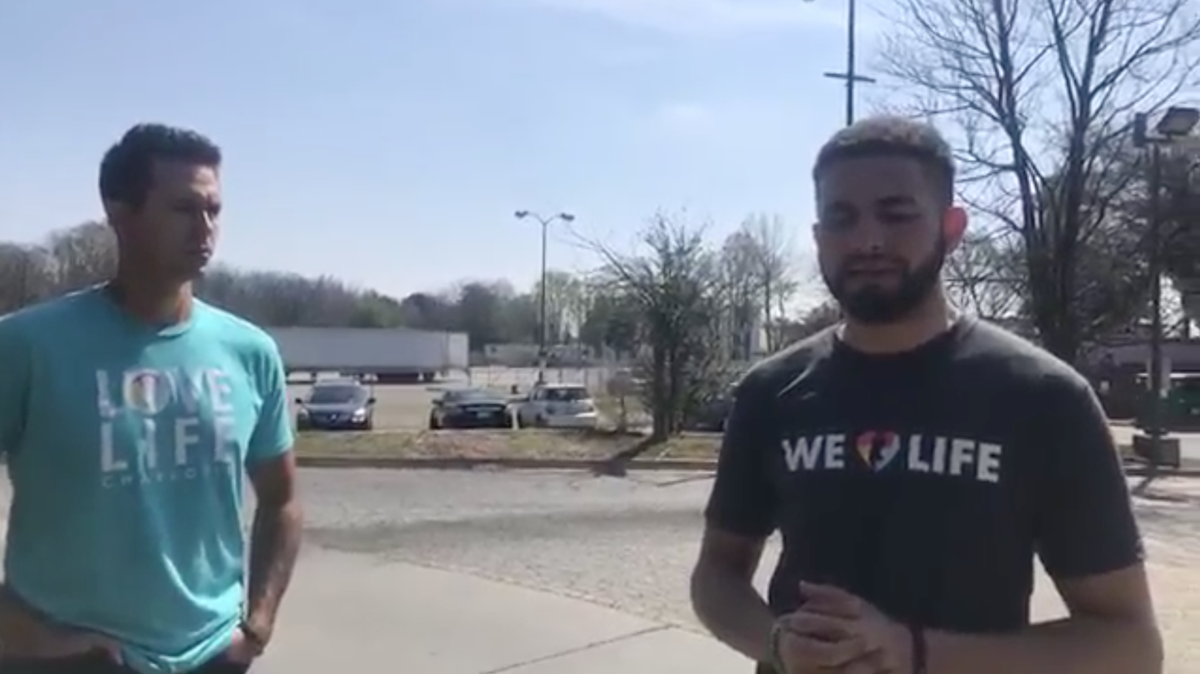 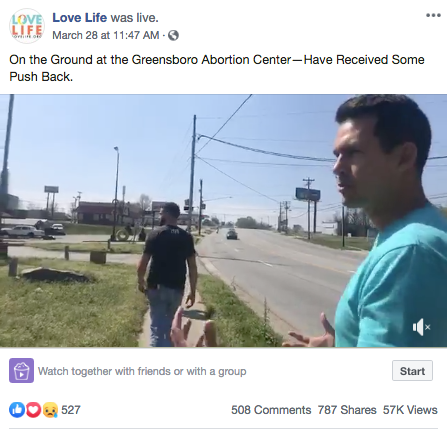 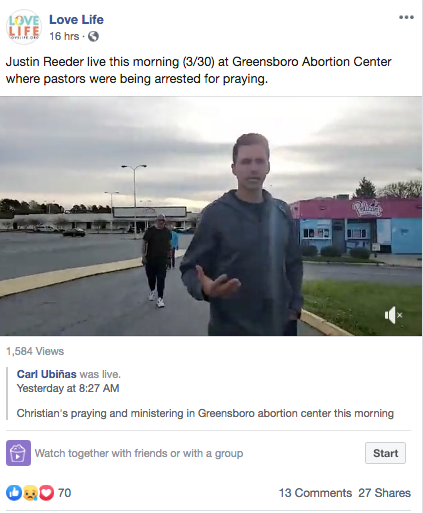 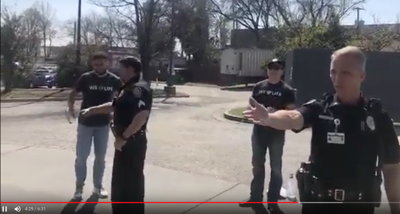 On March 28, two different groups violated Guilford County’s “stay-at-home” order by protesting in front of A Woman’s Choice, Greensboro’s only abortion provider. The first complied when the Greensboro Police Department ordered them to depart. The second refused and were arrested, making them the city’s first arrests for violating the “stay-at-home” order in response to the COVID-19 pandemic.

Three members of the second group returned to the clinic on Monday, March 30, and were arrested again.

As medical facilities are an essential service, the clinic, which provides STD testing and treatment, ultrasounds, parenting/adoption services and abortion, was open. The first patients passed the protesters unshielded by the rainbow umbrellas of volunteer escorts, who had agreed to stay home.

As previously reported, protesters have used the Midori Express parking lot, which overlooks A Woman’s Choice, for several years as a literal platform for prayers, speeches and anti-abortion demonstrations directed at patients of the clinic. On Saturdays, members of the “Abolition” movement— called “street preachers” by clinic escorts— and other protesters set up a PA system at the edge of the clinic’s property, taking advantage of the grassy knoll at the edge of the Midori parking lot that puts them in the path of arriving patients.

On Saturday, the first protester to do so set up his P.A. system at 7.55 a.m., and told one patient, “I come from Doxa Church in Burlington,” and after nine minutes of preaching, two members of the “Abolition” movement joined him. Seven minutes later, four GPD officers arrived under the command of Lt. Dan Knott. The three protesters argued that they were “broadcasting” and thus, as “media,” were performing an essential service. The officers were polite but adamant, and the three men left.

Later on, four men from Love Life arrived and livestreamed on the group’s Facebook page that they were in the Midori parking lot because, “We got a report that, in Greensboro, the police have pushed against people being out here to pray, even though we’re doing social distancing.”

The speaker in the video then says, “We just came up here because they basically ran off the prayer walkers, they ran off the sidewalk counselors, and the abortion center remains open.”

Early in the video, they claim to have spent “the last hour” talking to “a young man” whose girlfriend was inside the clinic. They alleged that the patient had had been prescribed the abortion pill, and expressed satisfaction at having allegedly persuaded her boyfriend to “attempt to convince her to reverse it.”

While the experimental procedure sometimes called “chemical abortion reversal” has been touted by conservative lawmakers, a clinical study reported in the January 2020 issue of the peer-reviewed journal Obstetrics & Gynecology declared it ineffective and highly dangerous.

Three-and-half minutes into the livestream, Lt. Knott interrupted and made clear that he knew the men were here to confront the GPD, and was less willing to debate them than he had been with the three “street preachers.”

“I’m here to tell you now that you need to return to your vehicles,” Knott said on the live stream video. “You can choose to comply with what I’m telling you, or you’re going to be charged.”

The four refused to comply, and sat on the ground to be handcuffed. In the arrest records, they are identified as Justin Reeder, 34, of Huntersville; Carl Ubinas, 52, of Mooresville; Jason Oesterreich, 42, of Locust (Stanly County); and Isaiah Burner,23, of Statesville.

According to the Love Life website, Reeder is the organization’s founder and Ubinas is its “Pastor / Chief Operating Officer.” Two days earlier, on Thursday, March 26, Love Life posted a website banner titled “COVID-19 UPDATE” on the then-upcoming protest. It read, in part: “In the best interests of the born and pre-born, we will not be gathering as a group to abide by CDC recommendations. However, since abortion centers REMAIN OPEN, we will be prayer-walking INDIVIDUALLY.”

YES! Weekly asked Assistant City Manager for Public Safety Trey Davis if this would be violation of the “stay-at-home” order.

“Yes, this activity would be in violation of the order,” wrote Davis on Friday morning. “GPD has contacted the group to inform them of the order and seek to gain compliance.”

In his reply, Davis expressed gratitude for the information that Love Life appeared intent on defying the “stay-at-home” order.

In a Saturday afternoon email, GPD public information officer Ronald Glenn told YES! Weekly that all four men were, “arrested under the stay-at-home order” and that Reeder, Ubinas and Oesterreich were “also arrested and charged with one count each of Resist Delay Obstruct Public Officer,” which is a Class 2 misdemeanor. Later that evening, Glenn confirmed that all four had been released. Glenn also said that these were the city’s first arrests for violating the stay-at-home order, also a Class 2 misdemeanor.

On Monday, the GPD issued a news release stating that Reeder, Oesterreich, and Burner returned to the clinic location that day and were arrested for the second time in 48 hours. Arrested with them were Andre Gonzalez, 42, of Mooresville; Richard Whittier, 46 and John Mcatee, 56, both of Mint Hill; and Leroy Stokes Jr., 58, of Greensboro. All seven were charged with “violation of the Guilford County Stay at Home Order and Resist Delay and Obstruct a Public Officer.”

In response to these violations of the “stay-at-home” order, Greensboro police chief Brian James released a video asking for compliance.

“As you know, we are fighting a worldwide pandemic; and we’re fighting it right here in Guilford County,” James said. “Our goal is gain compliance and not to make arrests, so I ask you to please help everyone, and help your community, by staying at home to reduce the spread.”