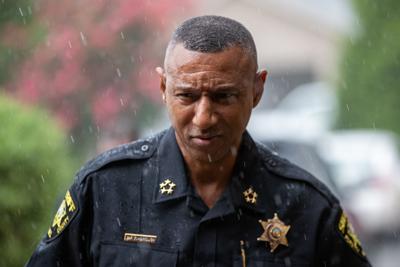 After activists from Triad Abolition Project and Prisoner Outreach Initiative hosted a drive-by protests at the Forsyth County Law Enforcement Detention Center on Sunday, the Forsyth County Sheriff's Office publicly addressed the recent explosion of COVID-19 cases at the jail on Monday morning.

At 11 a.m. on Dec. 21, Sheriff Bobby Kimbrough Jr. held a press conference for the purpose of clearing up "a lot of the misinformation that is floating around in our community."

Kimbrough said that a false report had circulated that an inmate from the FCLEDC had been taken to the hospital due to COVID-19. He also addressed the allegations surrounding the alleged mistreatment of inmates.

“Last week, we decided, with the recommendation of the CDC and the health department, that we would test every resident including staff inside the detention center,” Kimbrough said. “During that process, to prevent cross-contamination, we allowed residents to stay in their cells for the 72-hours. But here is what I need for you to understand, during that time, the residents have sinks in every cell, running water (hot and cold water), a towel, washcloth and soap. The purpose of that was to punish anyone but to prevent the spread.”

During the Monday press conference, Kimbrough reported that 68 inmates tested positive for COVID-19 out of a population of 575.

“If you do the math, that is 12%,” Kimbrough asserted, comparing the seemingly low positive percentage with the national average positivity-rate for detention centers, which is currently 20%.

But that math became a bit confusing after the FCLEDC’s Director of Nursing, B. Williams took the podium and said that out of only 149 results that had come back, 68 of those were positive.

“We are continuously getting test results in as we speak of the 568 tests that we took on the two-day mass testing event,” Williams noted. “Right now, we are waiting on 419 test results to return to our facility.”

Several reporters present at the press conference disputed the Sheriff’s original math by clarifying that out of 149 test results that had come back, 68 were positive meaning that the positivity rate would have been about 45%.

One reporter kept asking how the FCSO could come to the conclusion that only 12% of the FCLEDC population were testing positive without knowing the results of the remaining 419 outstanding tests.

“As of this moment, we can confirm that 12% of the population has tested positive. As test results continue to—”

The reporter interrupted to ask if the 12% came from the 568 that were tested or the whole 575 population that Kimbrough initially stated.

“We are not going to posit how many are coming back,” Howell replied. “Right now, we can only confirm that only 12% are positive, and that number will be adjusted as we receive more test results.”

According to a subsequent Facebook post made by the Forsyth County Sheriff’s Office on Dec. 21 at 12:07 p.m., the agency had received the remaining results:

We have JUST received the results of the COVID tests for all 568 Detention Center residents. 68 tests were positive, which is 12% of the Detention Center population. (In the press conference earlier today, we were still awaiting test results, but we now have ALL of the results and ONLY 68 residents of the entire population tested positive.) 3 of those residents came into our facility already known to be COVID-positive. The process of contact-tracing is currently underway, in collaboration with our contracted medical services provider and the Forsyth County Department of Public Health. The national average for Detention Centers and Prisons is 20% of the population being positive for COVID.

So, why did the director of Nursing just report that only 149 test results had come back? To be clear, are you stating that you all have just received the remaining 419 test results— and all of which were negative?

As stated in the post - the information released during the press conference was the current information at that time. We are now updating that information to say that the remaining test results were received and all were negative.

After more questions surrounding the "oddly timed" (as one Facebook commented put it) results of 419 tests, the FCSO Facebook account replied on Dec. 23 with the following statement:

The Housing Units containing individuals exhibiting symptoms were tested first, thus the large number of positives in the initial tests returned. As the press conference was being held, we were receiving results on the other tests but could not guarantee when we would have all of the results.

That same afternoon, I received an anonymous tip from several sources indicating that test results were still coming in, despite what the FCSO Facebook account reported not even an hour after the press conference on Monday.

I emailed Howell to ask if these claims were true and if so, why the FCSO reported that the remaining test had come back negative on Monday.

“The information we released Monday was accurate as of that time,” Howell wrote. “The population of the Detention Center is ever-changing, sometimes even hour-by-hour as individuals are arrested and processed into our custody and others meet the conditions of their release and are processed out. The information we gave at the 12/21/2020 press conference (from the mass testing event for the Detention Center residents that started on 12/16/2020) was accurate at that time, and when the other results (that were literally being returned during the press conference) were all received and compiled, we did update the public with that information immediately. In the results from the mass testing event for the Detention Center residents that started on 12/16/20, some test results were classified as invalid by Public Health. After retesting those individuals, and with the addition of test results from new intakes, 28 additional individuals have been classified as COVID-19 positive. The updated total number of COVID-19 positive cases in the FCLEDC is ninety-five (95) individuals as of 12/22/20. The Detention Center resident population on 12/22/2020 was 575, resulting in 16.52% of the population as being confirmed COVID-19 positive. Please note that these numbers will continue to change as individuals are brought into our custody and are tested, and as they are also released from our custody. Additionally, 30 residents are scheduled to move from positive to negative status on 12/25/2020 as they have exhibited no symptoms and will have completed the proper quarantine requirements (per Public Health) at that time.”

Julie Brady, executive director of the nonprofit Forsyth County Community Bail Fund, said in a phone interview on Dec. 20 that the group recently organized a mass bail out of people after hearing reports of the jail's current COVID crisis. Brady said they were able to bail out 14 people with Class H or lower felonies since last Thursday.

"People just assume that when you are in jail, you are homeless and people don't love you and it's just not true," Brady said. "We are cheering for them by getting them out from this oppressive, abusive environment and home to their community— to our community. It is not like these are interlopers coming in from afar; they are fathers, brothers, sons, husbands, wives, mothers, and sisters of people in Winston-Salem."

Brady said that the FCSO and jail staff has failed to manage COVID-19 and criticized a Facebook post made by the agency on Saturday, which addressed the Forsyth County Community Bail Fund demands from a recent press release.

(In that post, the FCSO erroneously stated that the press release was disseminated by Triad Abolition Project.)

We are a law-abiding law-enforcement agency. We have done - and we will continue to do - what is moral, what is legal, and what is right. When there are no more criminal acts being committed, we will cease to make arrests. We have an obligation and a commitment to serve and protect OUR community. We are the Office of the People.

"What we are doing with the Bail Fund is protecting the public health of our community," Brady said in response. "While the sheriff is posting condescending BS on Facebook, we are the ones getting people out of that death trap and to the homes of their families. We have helped the health of our community way more than Sheriff Bobby Kimbrough has. "