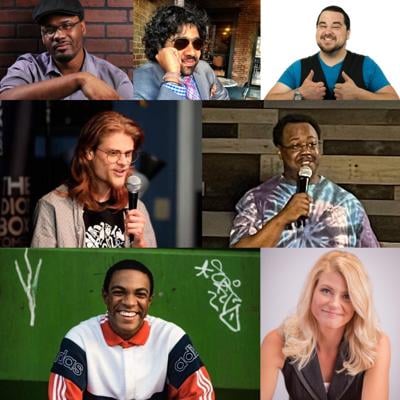 If laughter is the best medicine, we could all use a booster shot — which is precisely what The Idiot Box Comedy Club has in store for audiences Nov. 6 at Marketplace Cinemas, 2095 Peters Creek Parkway in Winston-Salem. The stand-up comedy show, which is recommended for audiences 18 and over, will begin at 7:30 p.m. Tickets are $6 and are available from Marketplace Cinemas: https://www.mpcws.com.

The idea to present regular stand-up comedy shows stemmed from Marketplace Cinemas having hosted the North Carolina Comedy Festival last month. According to Marketplace general manager Zack Fox, the response was beyond expectations. “The one-night event at our cinema was a hit, to say the least,” he said. “One of our largest theaters was completely sold out, filled with laughter and happy people, which was a fantastic sight given the last 18 months. It really showed that people still want to go out and enjoy a Saturday night with a shared group of people.”

Jennie Stencel, the owner and creative director of The Idiot Box Comedy Club, concurred. No sooner had the festival concluded than preliminary plans to bring a regular stand-up comedy show to Marketplace Cinemas were put into motion. “We loved partnering with Marketplace,” Stencel said. “We love the spot and the family that owns it are great folks.”

Stencel will be one of the comedians performing Nov. 6, along with Zo Myers, Nevin Sharma, William Spottedbear, David Decareaux, J.D. Etheridge, and Dejahzh Hedrick, all of whom performed during the North Carolina Comedy Festival. One of the indoor auditoriums has been converted into a “bar cinema,” with popcorn, beer, and wine available for purchase.

Stencel acknowledged that “the (COVID-19) pandemic was pretty rough. No shows or classes for months, but we were able to get things going again safely, and we’re having fun again.”

Should the stand-up shows prove successful, “we plan on having monthly performances at Marketplace and hopefully growing that to weekly.”

Fox first met Stencel during the production of Uncle Otto’s Truck, the award-winning 2019 short film adapted from Stephen King’s short story by screenwriter/producer/director Dan Sellers. Stencel starred as The Narrator and Fox, himself an award-winning filmmaker, served as cinematographer. (Truth in disclosure: Yours truly was an associate producer on Uncle Otto’s Truck, although I spent no time on the set.)

“(Jennie) and I got along great during production and she’s hilarious to be around,” Fox recalled. “I believe I said, ‘You should do comedy’ at some point, and she simply replied, ‘I own The Idiot Box Comedy Club ...!’ I suppose that was my foot — in mouth! Since then, I’ve become one of the founding members of her new improv troupe, ‘The Everlasting Improv-ers’ at The Idiot Box, and our next show there is Nov. 20!”

Although Marketplace Cinemas will continue to run regular movies, drive-in, and special events, Fox confirmed that they’re pivoting into live shows. “In addition to our new ‘bar cinema,’ we are currently in the process of working with a terrific local community theater group on converting another theater into a ‘black box theater’ for additional stage and live events. 2022 is going to be exciting for our cinemas as we move out of just movies and into a multi-arts venue.