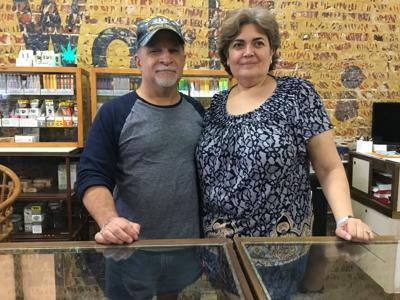 In a case drawing attention from legal experts across North Carolina, a Hispanic US Navy veteran was arrested Monday for allegedly selling “marijuana” at his store in downtown Greensboro.

On Monday, six Greensboro police officers arrived at the home of Hector Sanchez and Kattya Castellón, co-owners of Essential Hemp on 529 South Elm St., and arrested Sanchez on charges of Felony Possession of Marijuana, Felony Possession with the Intent to Sell Marijuana, and Felony Maintaining a Dwelling for the Purposes of Keeping a Controlled Substance. According to the warrant, the arrest was not based on a search of the home, but on retail products seized from the store on Sept. 14 or purchased there by undercover officers in August.

Sanchez’s attorney Brennan Aberle called the arrest retaliation for Sanchez’s contacting the media about the alleged illegality of the September seizure, in which GPD sergeant and Homeland Security investigator D. S. Rakes confiscated merchandise and cash from Essential Hemp, but did not press charges for 41 days.

In a Sept. 24 letter to Greensboro Mayor Nancy Vaughan, Sanchez stated the seized products represented a $9,500 wholesale value and a potential retail value of over $25,000. In an Oct. 22 interview, Sanchez called this “a clear violation of the Fourth Amendment prohibition against unreasonable search and seizure.” In an article published that day by the News and Record, he was quoted as saying “I think it was shakedown . . . we are in their backyard downtown and they don’t like that.”

Although Sanchez has now been charged, the arrest is problematic, according to not only Sanchez’s attorney Aberle, but an expert consulted by YES! Weekly.

“Hector embarrassed the GPD by publicizing that they had seized his property, weren’t giving it back and had not arrested him,” Aberle told YES! Weekly on Monday afternoon. “In apparent retaliation, they have doubled-down with these baseless charges.”

According to both Sanchez and the manufacturers, the product seized by Det. Rakes contains only delta-8 THC, which is less potent than delta-9, the psychoactive ingredient in cannabis. The 2018 Farm Bill made delta-8-THC legal in North Carolina, while delta-9 is not.

Sanchez showed YES! Weekly over a dozen certificates shipped with the products he purchased from manufacturers. “These are a third-party analysis of all the products. All the manufacturers provide those to us, and we are very confident that they are right. These US-based companies have a lot to lose if they got lenient or relaxed their standards.”

After obtaining copies of the search warrant and arrest warrant, I shared them with Dr. Phil Dixon of the UNC School of Government. Dixon, whose specialties include cannabis and hemp law, criminal law and procedure, and search and seizure, said that he finds both documents lacking in regards to probable cause, and called multiple statements made by Det. Rakes in the September search warrant “particularly troubling.”

After identifying himself as a detective “currently assigned to the Vice/Narcotics division” and “a Task Force Officer with the Department of Homeland Security,” Rakes wrote that, in August, he “received information from a concerned citizen” about Essential Hemp, and wrote that he “knows through training and experience that smoke shop retail stores frequently sell loose marijuana flower products that claim to be legal and under the .3% THC guidelines,” but that that “the majority of marijuana flower items sold are above the legal THC guidelines, thus making it illegal to possess them."

Dixon called these claims “news to me” and noted that “nowhere does he state just how he knows that.”

On Aug. 24, Rakes entered the store, where he “observed many jars of what appeared to be suspected marijuana flower on a shelf behind the counter,” as well as “many vaping cartridges in the glass display counter that advertised ‘delta-8’ and ‘delta-10.’ One of the cartridges observed was a brand named ‘3 chi’.” Nowhere in his statements did Rakes note that delta-8 and delta-10 are legal in North Carolina. Instead, he wrote, “I know through many investigations and arrest that this particular brand contains illegal levels of THC.”

Rakes stated that he purchased a Blue Dream cartridge and approximately 3 grams of the “Moon Rock flower,” which he transported to Avazyme Laboratory, an “independent local North Carolina Laboratory in the Raleigh Durham area,” for testing.

Professor Dixon noted that Avazyme’s procedures and records are not public. “If it was the state crime lab, you could request their standard operating procedures and certifications of their analysis, as all that stuff is public record, but it’s not that way with the private lab, which is afforded a little secrecy in terms of their methodology.”

Avazyme is owned and operated by Dr. Volker Bornemann. When reached by phone on Friday, Bornemann said that his lab offers a variety of tests and that some are both less extensive and less expensive than others. While he said he could not disclose which tests were done on the products from Essential Hemp, he acknowledged that his cheaper tests could not determine how much of the THC in a sample is delta-9, if the product also contains delta-8.

“It cannot accurately measure delta-9 if the delta-9 signal is obscured by the delta-8 signal, which happens when you have large quantities of delta-8 present.”

“The limit is .3% and the product came back at 1.5% and 3.0%. Yes, that’s over the legal limit if it’s delta-9, but if this was an actual illicit marijuana product, those percentages would be much higher, like 15, 18, or even 22%, as that’s what pot contains these days. So, it looks like those are incidentally over. It may be by design, it may be because the metabolites have degraded over time when exposed to certain environmental factors.”

Dixon was also troubled by statements made in Rakes’ request for a search warrant, in which the detective claimed “it is common for persons involved in the distribution of narcotics to consider guns essential tools of the drug trade” and “for subjects to conceal weapons on their persons, in their residences, and/ or businesses,” where the firearms “are used to protect and secure a drug dealers property;” and also called it “common” for those involved in “drug trafficking” to “keep sums of money either as a result of scheduled drug sales.”

Calling these statements “bizarre,” Dixon said “this appears to be a family hemp shop that’s trying to comply with the law, and he treats them as if they are drug traffickers. The state would have a hard time prosecuting under these circumstances.” He also said it was “hilarious” that Rakes stated that the store’s sign depicted “a marijuana flower.”

“You can’t look at a flower and say it’s marijuana as opposed to hemp, just as you can’t look at the dried flowers in jars on the walls of the store and say ‘they appeared to be marijuana.’ Not when you know it’s a hemp store and there is such a thing as smokable hemp.”

Dixon made these statements before Sanchez was arrested, but on Monday called the felony charges problematic.

“Probable cause requires knowledge. Drug possession means you knowingly possess a controlled substance. If his product comes from a distributor that marked it as legal, with a lab analysis saying so, and he truly believed it was legal, then he would be not guilty. Now, that is something where he would have to raise that evidence at trial, and it would be up to the jury to decide they believed him, and it could be a long and expensive journey to get to the point where he can argue his case.”

Shortly after being charged on Monday afternoon, Hector Sanchez was released without bond on a written promise to appear in court for trial. GPD public information officer Ronald Glenn told YES! Weekly that the department cannot comment on the case at this time.

Sanchez and his wife Kattya Castellón, who is the store’s co-owner and business manager but has not been charged, alleged that Sanchez was arrested because they would not quietly accept the seizure of merchandise and cash, and said they are outraged by what they called retaliatory charges, and that the GPD has tarnished their reputations.

“Kattya is a longtime member of the community, and so am I,” said Sanchez. “We do a lot of community work, and cannot live with the stain that these guys have put on our store and our persons, which is just unacceptable”

Sanchez grew up in New York and served in the US Navy from 1979 until 1994 as an electronics technician on nuclear-powered fast attack submarines. Castellón was the UNCG Associate Director of Undergraduate Admissions until she retired to open the store with her husband. She said that, during her 19 years at UNCG, she worked on special projects that helped increase admissions from under-represented communities, that her legacy there included the creation of a summer camp in which High School Juniors spent a week on campus to learn about higher education opportunities available to them. She is currently a Board Member of the Community Foundation of Greater Greensboro and a Board member of the Latino Community Coalition of Guilford County. Sanchez is also a member of that coalition.

“They have tried to make our store look like a drug haven,” said Sanchez, “but the majority of our customers are looking for hemp solutions for their medical ailments. Our customers say that they have had positive experiences with hemp for arthritis, anxiety, irritated bowel syndrome, and they buy delta-8, and it works for them.”

Castellón said that the seizure and subsequent arrest have undermined her faith in law enforcement and the legal system.

“I have always believed in going by the book, always making everything right, by law. And when I think about police, I think, these people are on our side because we go and do everything correctly. And now they come against us with all this that is just beyond my understanding. They’re supposed to be the good guys. They’re supposed to help us citizens do the right thing to carry on our business. And now I feel they’re against us, with no reason.”