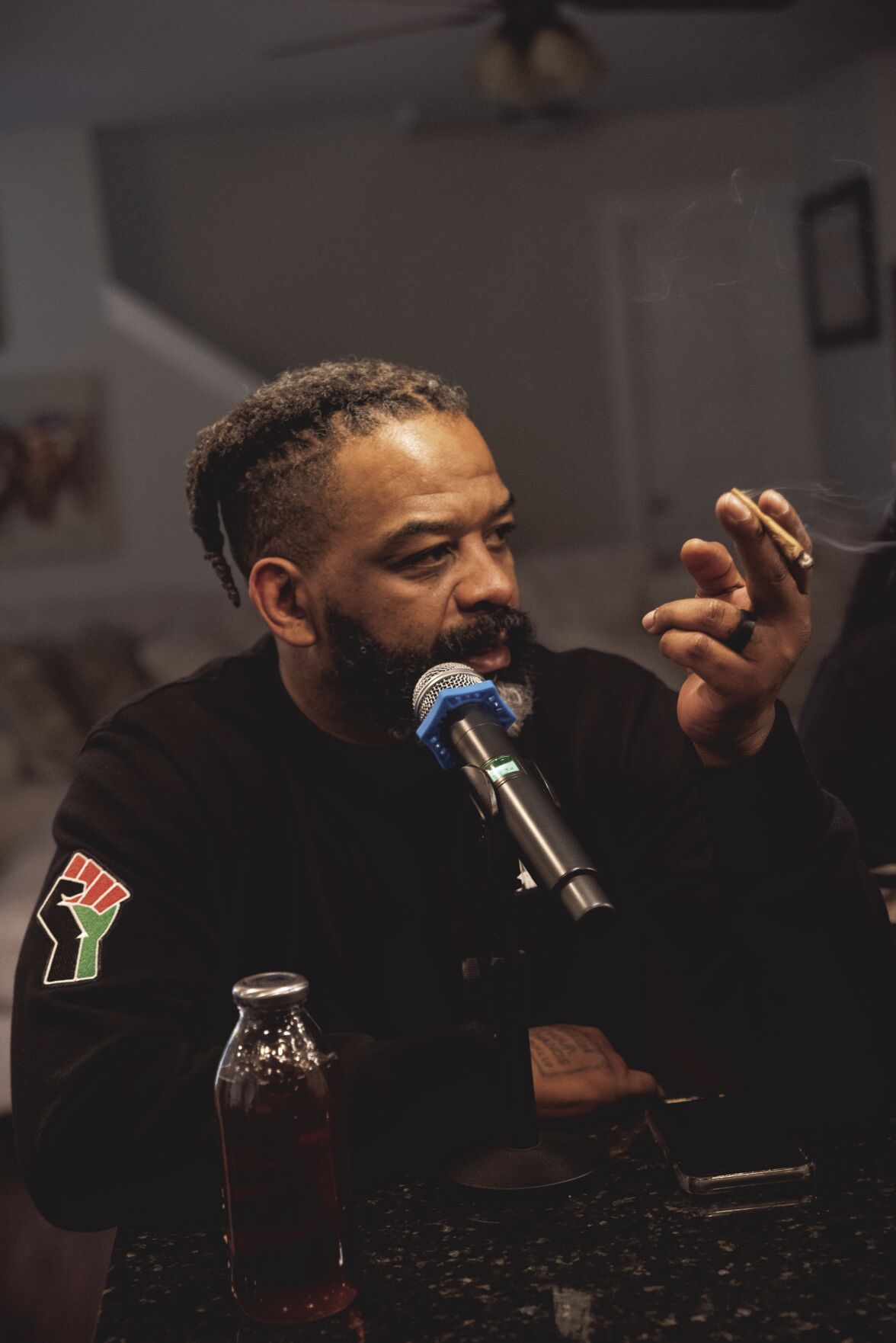 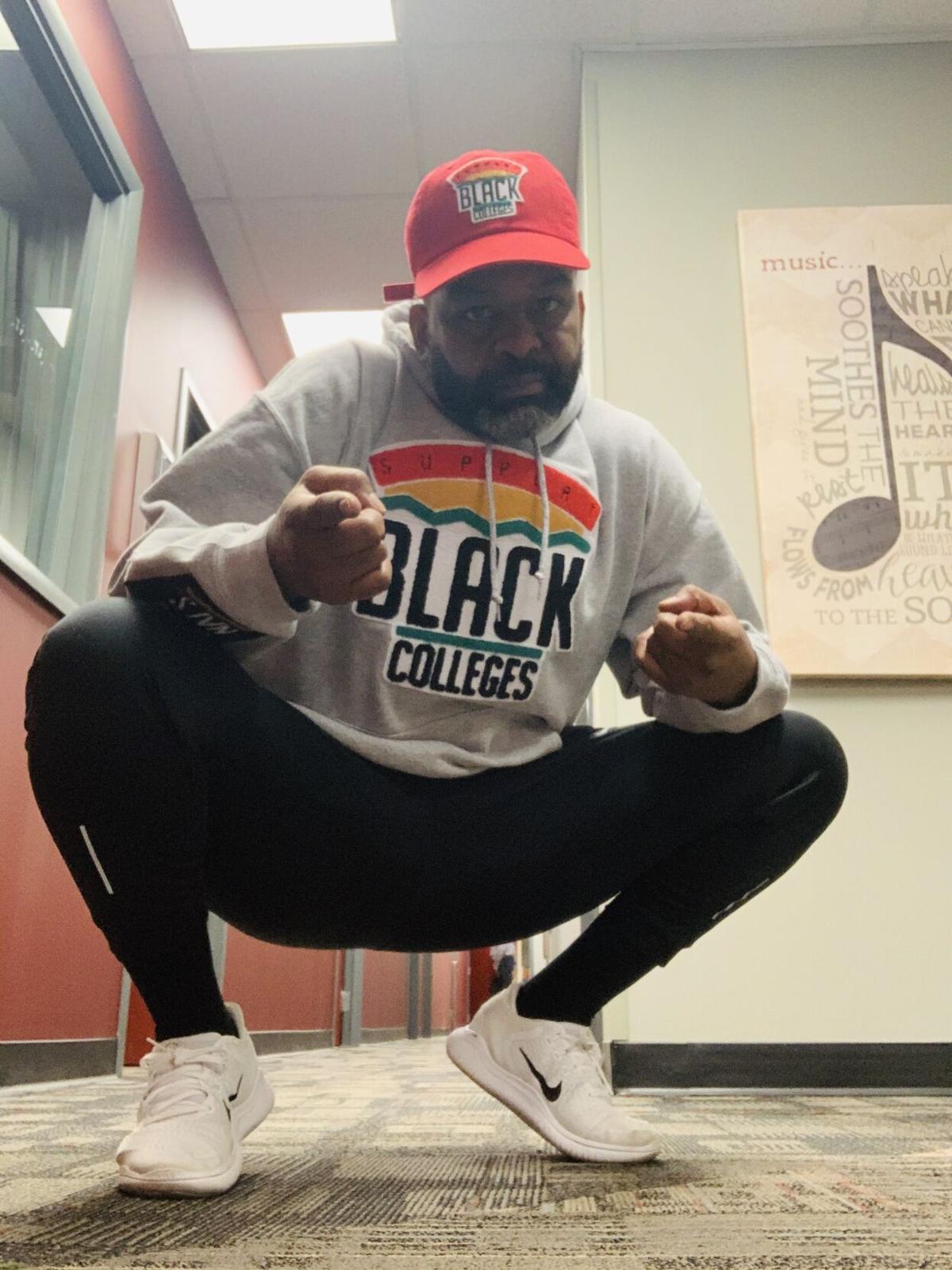 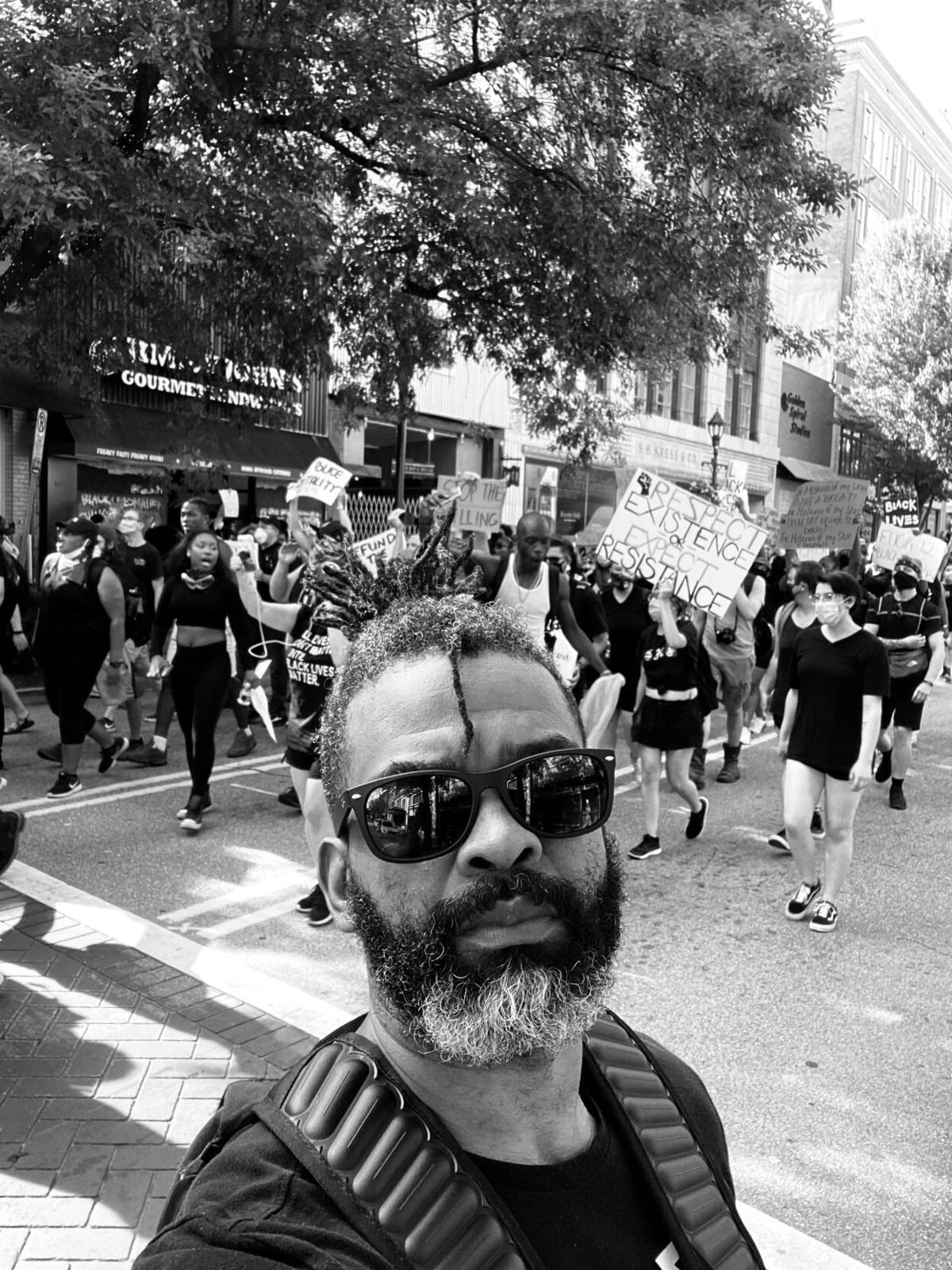 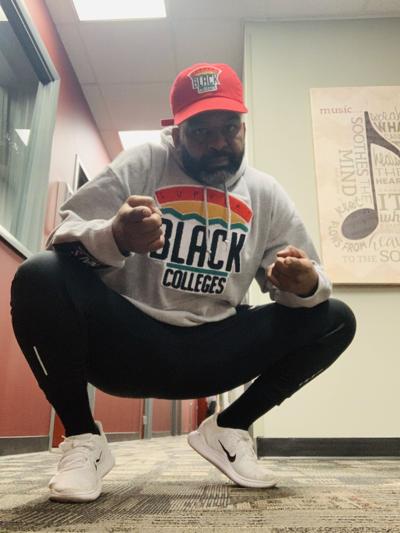 For years the Triad and beyond has woken up to the antics and musings of Gerard Demar “Osama Bin Drankin” Rankin. He’s been as much a part of hundreds of thousands of North Carolinean’s morning’s as their first cup of coffee.

On the flip side of that, for over ten years, he’s helped you end your week and entertained you on the weekends, gracing the stages of comedy clubs to make your sides hurt, your cheeks burn, and eyes water from laughter.

It’s a talent that the Charlotte native has mastered and a calling that he was walked confidently into — sack first, as he would say.

“I’ve been silly all of my life, but all this getting kicked out of class for clowning has finally paid off,” he said.

Rankin, a North Carolina Agricultural and Technical State University alum who was recognized as a preeminent Aggie for his work in Greensboro, is a nationally-known comedian and a radio personality at Entercom’s 102 JAMZ. He began his career by hosting campus events and community shows.

While a series of unfortunate events led him to pursue comedy full-time, it was there he found success, life lessons, and a brotherhood with the Freestyle Funny Comedy Crew - B’Dhat, Darren “Big Baby” Brand, Burpie, and Chico Bean.

Always one to be ahead of his time, Rankin has long been a connoisseur of cannabis. That knowledge is now paying off in a big way and at a time when the nation is turning over a new leaf when it comes to the legislation of cannabis, hemp, and CBD.

Rankin, who admits to enjoying the benefits of the plant, said that he is glad to see the stigma behind the plant going up in smoke and is an advocate for the legalization of the plant.

While Rankin applauds the many states that have legalized the plant, including neighboring Virginia, he hopes to see North Carolina do the same. More importantly, he hopes the decriminalization of the plant comes right behind it.

“It’s long overdue. As a matter of fact, if anybody is in jail for marijuana right now, they should be let out. You have states and people who are making billions off of marijuana, yet and still you have somebody incarcerated for it. That’s criminal.”

In his newest venture, you can find Rankin and his comedy buddy Darren “Big Baby” Brand on the Last Few Hits podcast hosted on the All Def Cannabis youtube page. The show, aired every weekend, is a podcast where Rankin and Brand discuss current events and issues, but the podcast is designed to be the length of a blunt. According to Rankin, the feedback has been positive, and guests enjoy the show.

“They can laugh at it, they comment, and I’ve heard people say they interact with the screen sometimes, which is cool,” he said. “We discuss topics that are out of the box, and sometimes we have guests. We let the weed lead us.”

On Beats and Comedy

After participating in several comedy contests with the station, Rankin launched his radio career, becoming a regular on the Wild Out Wake Up Morning Show with Kyle Santillian, Toshamakia, and B’Dhat. His brother in comedy, B’Dhat, was on the show and invited him to come on the show on Fridays.

“That was all God. I knew nothing of radio, so it was a foreign language,” he explained. “I just knew how to act a fool and talk on a microphone, but I didn’t know the actual ethics.”

It didn’t take him long to catch on.

“I would do silly stuff and eat crazy stuff. I was like their jackass on the radio. I would literally go up there every Friday and wild out.”

Rankin did this every Friday for three years, with no pay, before the show disbanded, and he went back to doing comedy.

It wouldn’t be long before he graced the airwaves again.

“I got a call from Dhat, and he was like ‘Yo, come up to the station. We’re going to try something new.”

The duo tested out the chemistry with a few women before recording with Roxie. Rankin said that when she entered the picture, the duo instantly became a trio, hence the birth of the 3 Live Crew.

“The first day, it was fucking gold. We did a show or two, and the radio went back to normal. The next week we are getting a phone call to be at the studio at 6 a.m.”

From there, Rankin said, the trio went from a pilot show to contracts, to the rest being history and one of the best morning shows in the Triad area.

Maurice “Big Mo” Mayer, who also works with Rankin, spoke highly of him and the talents he brings to the station.

“To me, Drankins makes the 3 Live Crew go! He is extremely funny and talented! Also, he is smart, especially on race relations in this country.”

When it comes to his opportunity at Entercom, Rankin credits more than luck.

“It was just one of those situations where talent and hard work beat all the other stuff. I had talent and saw an opportunity. Not only did I take it, I owned it,” he said. “I knew this was my moment once God had me come up to that radio station and had me doing stuff on Friday’s.”

Rankin carries that same sentiment into his comedic success and the success of his Freestyle Comedy Brothers.

“For all of us to meet, it was all God. We were a five-man comedy group, and four out of the five of us made it to MTV’s Nick Cannon Presents: Wild’n Out,” he said. “That just boosted everybody’s success.”

From the beginning, Rankin said the crew knew they had something on their hands.

“It was like no other. From show number one. Our first show was 11 or 12 people, but we knew we had something. We couldn’t have imagined this, but once we all saw it, we embraced it.”

Rankin also hinted at something many in the Triad would love to see — a Freestyle Funny Comedy Show Reunion.

“We’re actually working on a reunion show now. When it’s going to come all together, we don’t know because everybody has schedules… but that’s one thing we’re at least talking about.”

Regardless of where they are now, Rankin describes the men’s friendship as a brotherhood.

“We’ve been on the road together for 13 and 15-hour trips. One state to the next state just chasing the bag and chasing dreams,” he said. “Every time we’ve gone out on the road and done that together, it’s amazing the outcome of it.”

Rankin went to a predominantly black high school on the west side of Charlotte and had his fair share of racist experiences but was never passionate about social justice until he was older.

He became even more passionate after being convicted of a felony while pursuing his Master’s degree and losing his University job.

“I was sitting there in grad school like Honeywell is not going to hire me. BP won’t even hire me with a felony, so I stopped. I had to do something else. Something where I can make my own destiny,” Rankin said.

That felony became the fire and driving force that helped Rankin see that he didn’t have to live as a felon.

“I lived as a felon for so long until I realized that felon is not who I am. I have to live my life as if I don’t have that felony. I have to do the correct things in life now so that people won’t even believe that I have a felony. That’s the type of person I have to be,” he explained. “Once I began to recognize my mistakes and rise above them, I began to prosper. When people found out I did have a felony, they were like, ‘wow, what.’ That’s because I didn’t give off that aura or that energy. Everyone makes mistakes. How many people of color do you know in the system that have made a mistake, and they have been punished too harshly?”

It’s that fire that drives Rankin to dedicate his time, talents, and platforms to help others live out loud and give back to their communities. This was evident the last two years as social activists to the streets to decry the injustices throughout the nation and the Triad. While Rankin would say that he doesn’t lend himself to any particular organization, he will say he goes where he feels led.

This past summer, he was led to Downtown Greensboro to honor both the memory of George Floyd and bring awareness to the 2018 hogtying of Marcus Deon Smith that by the Greensboro Police Department that ultimately led to his death in police custody, the resignation of the police chief and a pending federal civil suits against the city of Greensboro, the police department and the EMTs that assisted.

“I just felt like that was really close to home. We dropped the ball on that, and I felt compelled to be out there with the people. I just feel like it’s time for the people in Greensboro to wake up. There are so many inequities that you see every day,” he said. “I tell the people as soon as you cross through downtown you see the scenery change. Why? Because of the inequities and the systematic things that have been going on in Greensboro for years and years and generations and generations.”

Rankin believes that the Triad’s youth are the key to making the changes necessary to build an environment that will benefit all of its residents.

He also said that he believes with more people being more aware when it comes to voting, there will be new faces running for office, more informed voters, and voters seeking genuine answers. He feels they will also be looking for real solutions to the issues that surround community policing, fair treatment, and police departments.

However, Rankin says the responsibility to rebuild trust in the community lies with the police departments themselves.

“There is no relationship right now. We know the community believes in no snitching, and we see how the police are viewed these days,” he said. “There is no communication or relationship.”

One way they can do this, according to Rankin, is to start holding each other accountable and being transparent within their own departments.

“You mean to tell me you have these racist police, and no one in these departments never had an idea that they were racists? That’s the only way that police are going to be able to build relationships with communities.”

He also suggests implementing an independent review board that can discipline officers and is elected by the community, just like the city council.

“What’s the point of having a board of police officers reviewing other officers? If that review board doesn’t have any power and all they’re doing is giving that suggestion to somebody and saying, ‘well, we think this officer is guilty of this, and he needs to be charged,’ and you hand it to another police officer. They are just leaving it in their hands.”