"But until the day that Congress sends you a marijuana reform bill to sign, you have a unique ability to lead on criminal justice reform and provide immediate relief to thousands of Americans.”

"During your previous tenure at the White House, President Obama understood that decades of harsh and discriminatory federal drug laws unfairly trapped minority individuals and communities in cycles of despair. That is why he used the tools of justice to grant clemency for 1,927 individuals convicted of federal crimes. Most of these individuals had been convicted on drug charges and would not have been sentenced so harshly, if at all, under today’s standards."

"Your Administration has the power to expand on this legacy and issue a general pardon to all former federal, non-violent cannabis offenders in the U.S and trigger resentencing for all those who remain federally incarcerated on non-violent, cannabis-only offenses for activity now legal under state laws."

"During your campaign, you committed that you would “automatically expunge all past marijuana convictions for use and possession.” Therefore, we urge you to grant executive clemency for all non-violent cannabis offenders. We look forward to working with you and the incoming Attorney General on quickly making this a reality."

NORML maintains that the establishment of a process to facilitate the review and expungement of past records is a necessary element of marijuana policy reform. Millions of Americans, a disproportionate percentage of whom are young people and minorities, have been subject to a marijuana-related arrest and criminal conviction.

Branding these individuals, many of whom are at an age when they are just beginning their professional careers, as lifelong criminals result in a litany of lost opportunities including the potential loss of employment, housing, voting rights, professional licensing, and student aid and serves no legitimate societal purpose. The imposition of such lifelong penalties is even more punitive in instances where the criminal conviction is related to behavior or activities that have since been legalized and regulated.

In response to the lawmakers letter, NORML Political Director Justin Strekal said: “We are tremendously grateful for the leadership of the Cannabis Caucus, particularly Representatives Barbara Lee and Earl Blumenauer, as they tirelessly lead this ongoing but hopefully soon to be finished fight for marijuana justice nationwide.”

Strekal continued, "President Biden’s leadership on issuing pardons to nonviolent federal marijuana offenders would demonstrate a down payment on his campaign promise to prioritize criminal justice reform and inspire similar justice-oriented actions in a non-partisan fashion around the country. Shortly after President Biden's election, the House of Representatives voted to end the federal prohibition of marijuana. Now in a new legislative session, President Biden should follow their lead and move to immediately provide relief to those who continue to suffer from a criminal record for a nonviolent federal marijuana offense. 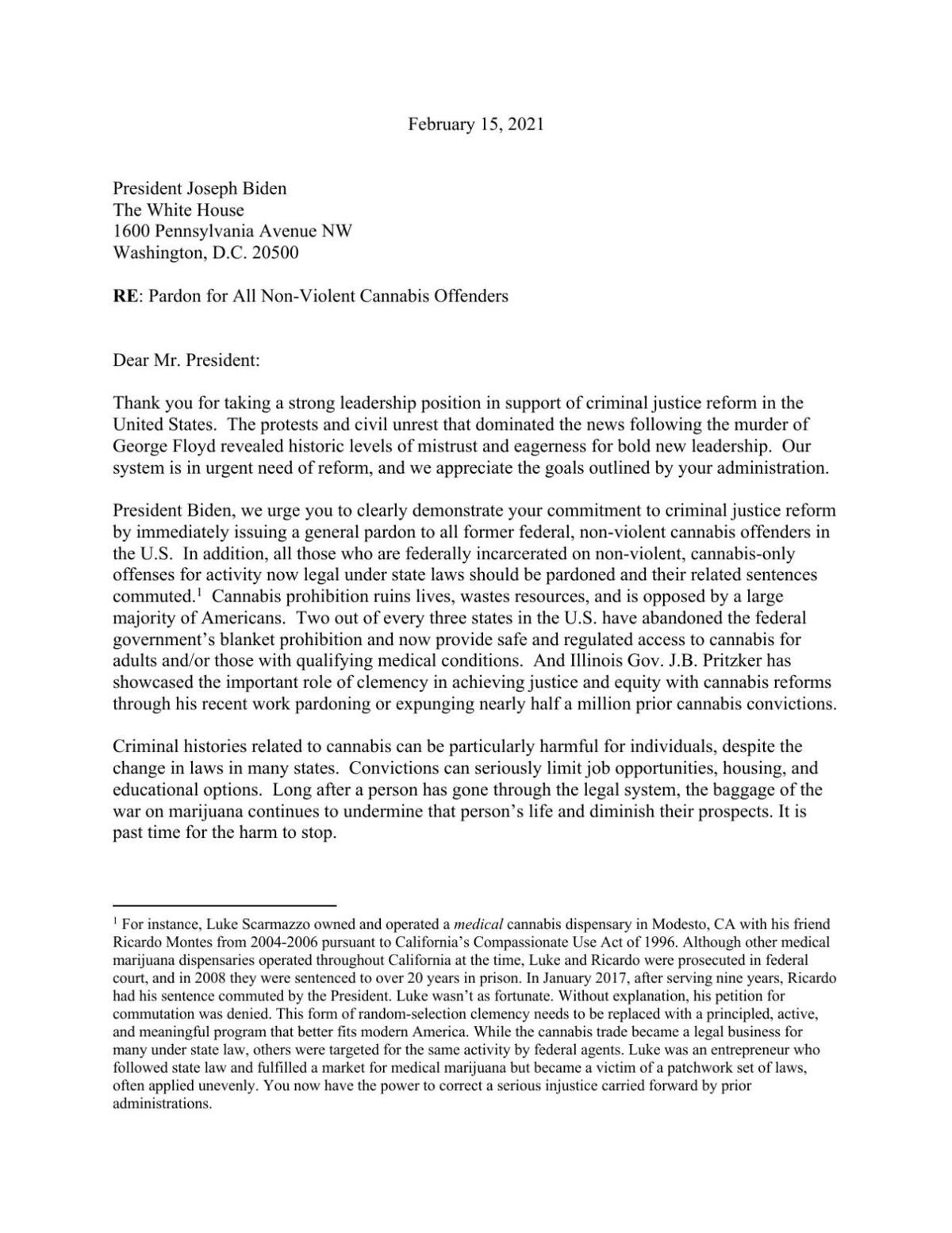 Earlier this week, NORML released a petition and their own letter calling upon Americans of all political stripes to join in a similar call for Presidential pardons. You can view that petition here and the letter above. The letter was cosigned by criminal justice reform groups including REFORM Alliance, Project Mission Green/The Weldon Project, The Last Mile, CAN-DO Foundation, Buried Alive Project, Libertas Institute, as well as various cannabis industry associations.

There is legal and scholarly support for the Administration’s use of blanket pardon powers. Such actions were previously taken by Presidents Ford and Carter: “One of the most common uses of systematic pardons in U.S. history has been to heal the wounds of war at home. For many years in the United States, we have been engaged in a war on drugs. Whatever the judgments of history about the virtue, the wisdom, or the success of this war, it has produced some laws and some sentences that are widely perceived to be unwise and unfair.” Pardon Us: Systematic Presidential Pardons, 2001 WL 1750548 (Vera Inst.Just.)

Find out more at norml.org and read our Fact Sheets on the most common misconceptions and myths regarding reform efforts around the country