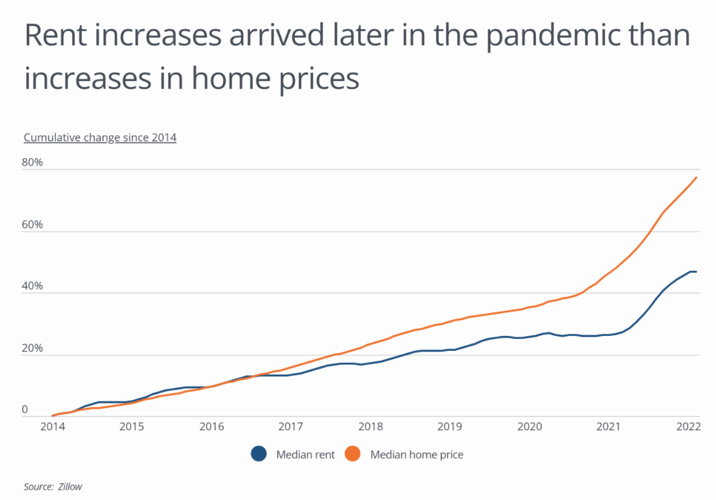 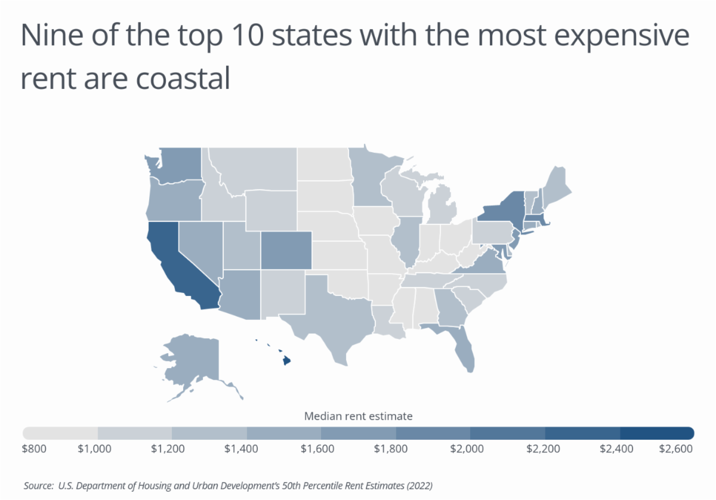 Greensboro-High Point Has a Median Rent Estimate of $1,082, Below U.S. Median

Inflation continues to be the major story in the U.S. economy, as households confront rapidly rising prices in nearly every consumer category. Data released in March by the U.S. Bureau of Labor Statistics showed that the Consumer Price Index rose by 7.9% from February 2021 to February 2022. This increase represented a 40-year high and a tenth straight month with year-over-year inflation higher than 5%.

Categories like energy and vehicles have seen the greatest price increases, but perhaps the most consequential increases for many people have been in the cost of housing for both buyers and renters. As the largest regular household expense, increases in housing costs can quickly push household spending higher and leave less available for spending in other categories.

The ultra-competitive residential real estate market has garnered its fair share of attention throughout the pandemic. Greater household savings and low interest rates have brought a flood of buyers into the market, but a lack of supply has led to intense competition and record sales prices. More recently, it has become clear that the rental market has not been spared from these forces either.

While home prices began to accelerate rapidly in the second half of 2020 and have barely slowed, rents were stable throughout 2020 as federal COVID relief dollars and policies like eviction moratoriums helped keep renters in place. But in 2021, rents began to see sharp increases as well, with the median rent increasing from $1,601 at the beginning of the year to $1,856 at the beginning of 2022, according to data from Zillow.

The more recent increases in rent are in part an extension of forces in the real estate market. For both buyers and renters, an inadequate supply of housing nationwide—particularly for single-family homes, which have had higher demand since the pandemic began—is constraining the options available on the market and raising prices. Rising home prices have also started to price many would-be buyers out of the market, which raises demand for rental properties. If interest rates rise this spring as expected, it could keep more renters out of the real estate market and produce greater demand for rentals.

Rising rents will be more challenging for renters in some locations than others. Many states and localities already have unaffordable housing, especially coastal states with high costs like Hawaii, California, Massachusetts, and New York. In these expensive locations, median rents can approach or top $2,000 per month, and the costs of a studio apartment can cost more than a typical 3- or 4-bedroom house in less expensive parts of the country. At the low end, Arkansas is the most affordable state for rent at $881 per month—approximately one-third of the median rent cost in the most expensive state, Hawaii ($2,537).

At the local level, metros in these more expensive states lead the nation in rental costs. Large metros like Boston, Seattle, and New York are particularly expensive, but those in California stand out as having some of the highest rents in the country. California is home to four of the five most expensive large metros for rent in the U.S., including the only location—San Jose—where median rents top $3,000 per month.

The data used in this analysis is from the U.S. Department of Housing and Urban Development and the U.S. Census Bureau. To determine the locations with the most expensive rent, researchers at Stessa calculated the median monthly rent across all unit sizes in each location. In the event of a tie, the location with the greater median monthly rent for a one-bedroom unit was ranked higher. Only locations with at least 100,000 residents were included. Additionally, metros were divided into cohorts based on population: small (100,000–349,999), midsize (350,000–999,999), and large (1,000,000 or more).

For reference, here are the statistics for the entire United States:

For more information, a detailed methodology, and complete results, you can find the original report on Stessa’s website: https://www.stessa.com/blog/american-cities-with-highest-rents/