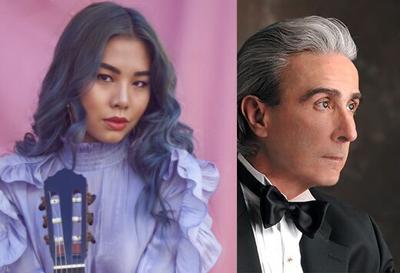 “It is a rare yet wonderful opportunity for EMF to add new faculty artists to our roster,” said EMF executive director Chris Williams. “We are fortunate to have many dedicated faculty with years of service to EMF, but it is equally exciting when we have an opportunity to add new, excellent teaching artists,” added Williams.

The Festival’s acclaimed faculty artists return each summer to guide and nurture the next generation of classical music students and also perform in over 65 performances and events over the five-week summer season.

Joining EMF for the 2022 Festival season are:

JIJI (classical guitar). Applauded by the Calgary Herald as “… talented, sensitive …brilliant.” JIJI is an adventurous artist known for her virtuosic performances that feature a diverse selection of music, ranging from traditional and contemporary classical to free improvisation, played on both acoustic and electric guitar. Through her impeccable musicianship, compelling stage presence, and constant premieres of new musical works, JIJI’s intriguing programming solidifies her reputation as a 21st-century guitarist. Washington Post selected JIJI as “one of the 21   composers/performers who sound like tomorrow.”

Santiago Rodriguez (piano) has been called “a phenomenal pianist ” (New York Times) and “among the finest pianists in the world” (Baltimore Sun). He has performed internationally with leading orchestras as a soloist, recitalist, and chamber musician. Rodriguez’ vast repertoire of concertos and recital programs reflect his great versatility and musical interests. Commanding a repertoire of over 65 concertos, he has performed concertos of Bach, Bartók, Beethoven, Brahms, Chopin, Mozart, Tchaikovsky, Grieg, Gershwin, Liszt, Schumann, Franck, Mendelssohn, Prokofiev, and Rachmaninoff over his 35-year performing career. One of today’s foremost interpreters of the music of Sergei Rachmaninoff, Rodriguez has performed all of the composer’s major piano works in concert.

Rodriguez also enjoys a distinguished reputation as a teacher and master-clinician. In 1980, he was a member of the Piano Division at the University of Maryland, where he held the rank of Professor and Artist-in-Residence. Beginning in September 2009, he accepted the position of Professor and Artist-in-Residence at the Frost School of Music, University of Miami. Rodriguez has presented master classes at many major music schools and national/state teacher’s conferences in the U.S. and abroad and has been actively involved in the outreach programs of almost every musical organization for which he has performed. Santiago Rodriguez holds a master’s degree from The Juilliard School, where he studied on full scholarship as a pupil of Adele Marcus, and he completed his undergraduate studies magna cum laude with William Race at the University of Texas-Austin.

Planning is already underway for EMF’s 61st season, to be held June 25 – July 30, 2022, on the campus of Guilford College in Greensboro, NC. Students interested in attending EMF’s summer study programs can learn more and apply online at easternmusicfestival.org/study. Deadline to apply is February 22, 2022. EMF recently celebrated a safe and successful conclusion to its 60th anniversary season on July 31, 2021.

For six decades, Eastern Music Festival (EMF), a nationally recognized classical music festival and summer educational program, is produced each summer on the campus of Guilford College in Greensboro, North Carolina. EMF is distinguished by its accomplished faculty, exhilarating repertoire and performances, and renowned visiting artists under the artistic direction of Gerard Schwarz. A powerful teaching institution, EMF provides encouragement and guidance to hundreds of young musicians from across the country and around the globe as they take their first steps towards careers in the performing arts. EMF’s five-week 61st season is June 25 – July 30, 2022. For more information, visit easternmusicfestival.org. Follow EMF on Facebook, Instagram, Twitter, and YouTube.

Eastern Music Festival’s mission is to promote musical enrichment, excellence, professional collaboration, innovation and diversity through a nationally recognized teaching program, music festival, concerts and other programs which will enhance the quality of life, health, and vitality of our region.