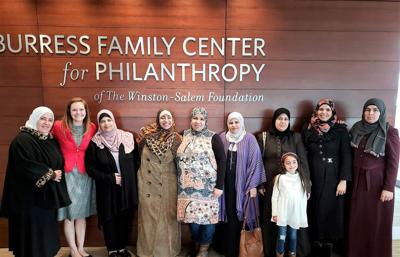 “I’ve always felt that food is one of the best ways to build bridges and bring people together from different backgrounds,” said Shereen Gomaa.

After moving from Egypt to North Carolina in 2009, Gomaa officially opened Delicious by Shereen as a local non-profit in 2016.

Since then, she has been nationally recognized for catering work.

“Even though we live in challenging times, it is so very important for people to get together and sit down to share a meal and get to know one another. We have more in common than we realize!”

Gomaa’s mission was to help the refugee community by empowering them to work using their cooking skills to help their families while increasing their dignity by working rather than asking for help. Specializing in Mediterranean and Middle Eastern Cuisine, with a twist and offerings of gluten-free/vegetarian/vegan options, the non-profit has received grants from the Winston-Salem Foundation and The Women’s Fund of Winston-Salem. In 2018, Gomaa was nominated and attained the ECHO Award for being a social entrepreneur that exemplified community leadership and creating interfaith relationships among the women, both refugees and locals of Winston-Salem.

Currently located at Buie’s Market, 749 Avalon Road North, Delicious serves up new options every week, and orders are picked up on Mondays between 4:30-6 p.m.

“Our business model is built upon social benefit for those in need. We’re interested primarily in helping people help themselves - being productive members of society that contribute to their community is the best way to integrate into life here in America. It’s been said before, but we want to give people a hand up instead of a handout,” Gomaa added.

Kofta Dawood Basha is one of the most popular items at Delicious. It consists of savory, succulent ground beef flavored with a mix of Mediterranean spices and diced potatoes cooked in tomato sauce.

“It is rumored that a nobleman named Dawood Basha, who was a governor during the Ottoman Empire, loved this dish so much that it was named after him,” Gomaa explained. The dish is accompanied by Mediterranean rice with vermicelli, an aromatic rice pilaf mixed with delicate vermicelli noodles and vegetable turnovers, a savory blend of mixed vegetables with onions, garlic, and spices nestled in a fluffy pillow of flaky dough.

When asked, Gomaa shared that her favorite dessert was either between ma’mool, a semi-sweet cookie with date filling, or their baklava, a thin, delicate sheets of buttered phyllo dough, layered with walnuts, golden raisins, sugar, coconuts, and orange blossom water, drizzled on top with homemade syrup.

The company’s vision statement further solidifies that the goal is to educate and empower: Our vision for Delicious is to open a facility that encompasses a certified commercial catering kitchen, a cooking class, and community space where people can gather and learn more about the plight of refugees in the Triad in a safe, comfortable, and social setting open to the public.

Delicious is currently working with five to 10 refugee families on an ongoing basis with the possibility of adding more or rotating between different families in the future.

Lena, a Syrian woman in the program who came to the States following the war, said she values the opportunities that being involved with Delicious by Shereen offer her.

“I spend most of my days in the kitchen, both in the States and back home in Syria. It is my kingdom, a place I have familiarized myself with and have control over. Syrian women cook from the heart. You can taste it, that effort, that time — it’s simply delicious.”