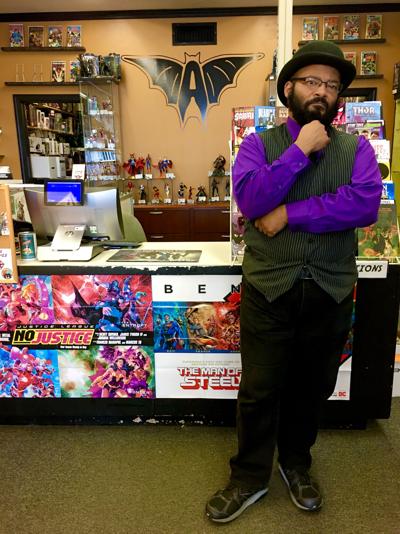 Jermaine Exum, dubbed Lord Retail by award-winning science fiction writer M. A. Foster, has been the public face of Acme Comics so long, some customers have assumed he owned the Triad’s oldest comics shop. But no, Mark Austin, who founded Acme on Greensboro’s then-desolate Elm Street in 1983, was its owner until September, when Austin sold it to his longtime manager Exum.

Exum kept that under his trademark hat until this week. He’s always been shy. When I reported in 2020 that he was heavily featured in Anthony Desiato’s award-winning 2019 documentary My Comics Shop County (available on Amazon Prime Video, iTunes, and YouTube), he couldn’t bear to watch it. Over three months after buying Acme, he still hasn’t told most of his numerous friends.

“I held onto this for so long that, when the time came, I had to be convinced to say something,” he wrote in an email on Monday night. “That’s how I can be in matters regarding myself. I have many emails sitting in drafts to major comics creators like Brian Michael Bendis, Jonathan Hickman, Gail Simone, who played a role in my journey. I really need to send them. Time has been so weird in the Pandemic Era.”

One of the very few creators he said anything to was former North Carolinian Tini Howard, who has written X-Men, Thanos, Conan, and Doctor Strange titles for Marvel, and just took over DC’s Catwoman last month.

“I happened to be sending an email about something else and I went ahead and said what was going on. She said ‘You’re going to really take an already amazing shop into the stratosphere, I just know it.’ That is both the plan and the challenge.”

Knowing how close-mouthed Exum can be, I reached out to a mutual friend, Flatline Comics’ co-publisher and artist Amanda Rachels (Vicious Circus, Amanda-Tory), whose honey-biscuit Alabama accent can be heard on the Ain’t No Such Thing: Original Southern Horror podcast. Once over her surprise and joy, she gave the following quote:

“Under Jermaine’s leadership, Acme Comics has set the gold standard for seasoned collectors and new comics readers alike. I’m absolutely thrilled for Lord Retail to live this well-deserved dream. Long may he reign!”

“An entire store of comics! The new stuff included Watchmen, the original twelve issues, so it was probably around 1988.”

Exum was a longtime regular when Acme moved off Elm Street.

“In 1996, a paying position opened up and I was recommended for it. I jumped almost immediately from clerk to assistant manager, then co-manager, then manager. For a time, I oversaw both the Lawndale and the now-gone Gate City Boulevard locations. When someone asked if I was the owner, I’d say I only managed the place.”

He kept doing that until last week, when a first-time customer, looking for vintage issues of The Amazing Spider-Man, asked the old question. “I told him that for a very long time I answered that question a certain way, but that I would give a different answer for the very first time. It was a moment for me and I think he realized it, even though we’d never met before.”

“When I keep something secret, it stays a secret. They’d hoped something more would come someday. They saw the long hours, the missed family events. For years. But one reason I am where I am today is that I operated Acme as though I owned it from almost the very beginning. It was my name and face associated with the store as far as clientele, other retailers, publishers, and creators were concerned. I’m very, very happy that I was able to let my parents know that I was owner of Acme Comics and everyone was alive and well to experience the moment.”

Taking over a 39-year-old business is different from starting a new one.

“We have order history of product carried going back longer than many stores have been open. That’s data that we absolutely could not lose access to in the process of becoming a new entity. It was a challenge, but over the years, we have made many allies among other retailers far and wide, within the comics distribution industry, and right here in the local community. The people who knew what was happening moved heaven and earth to make the transition as smooth as possible. There were periods of uncertainty, but everything went well. I believe this to have been an entirely unique experience.”